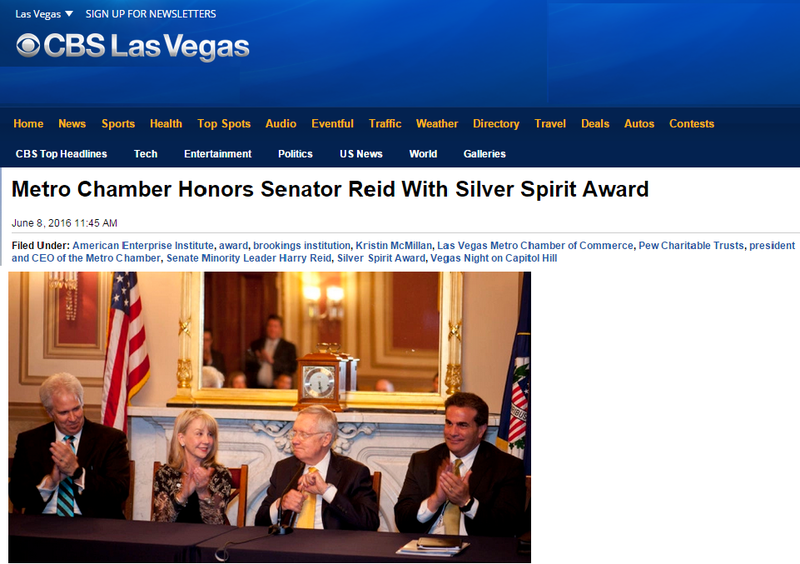 The Las Vegas Metro Chamber of Commerce honored Senate Minority Leader Harry Reid with the Silver Spirit Award for his outstanding legacy of leadership and service to the state of Nevada.Metro Chamber Honors Senator Reid With Silver Spirit Award The award was presented  by Kristin McMillan, president and CEO of the Metro Chamber, during a meeting with Senator Reid during the Metro Chamber’s annual trip to Capitol Hill to promote regional interests.  Senator Reid is the second-longest serving Democratic leader in the U.S. Senate after Senator Mike Mansfield of Montana, and the longest-serving member of Congress from Nevada.

The Metro Chamber delegation of nearly 50 buisness leaders, elected officials, and public policy experts discussed a variety of issues with Senator Reid including funding for Interstate 11, a long-time priority of Nevada’s largest business organization, as well as increasing homeland security funding for Las Vegas, legislation to ease visa processing for international business travel to the United States, increasing federal funding to the state, and water policy.

The Chamber also hosted the 2nd annual Vegas Night on Capitol Hill to build strong relationships between Nevada and Senators, House members and Congressional staff from other states.  The event was co-hosted by Nevada’s Congressional delegation and took place in the Kennedy Caucus Room in the Russell Senate Office Building and attracted around 500 people.

Today, the group is meeting with policy experts from the Brookings Institution, American Enterprise Institute, Pew Charitable Trusts, as well as experts on EB 5 funding.

The Chamber will also host an I-11 Caucus reception with members of congress, business leaders and transportation representatives from both Nevada and Arizona.  The annual reception is an opportunity to build strong relationships and collaboration between the states to move the Interstate 11 project forward.

During the trip, the Chamber group is focusing on several priority issues including funding to build Interstate 11, particularly the connection between Las Vegas and Phoenix;  passage of the JOLT Act to streamline visa processing for international business travelors to the United States; increasing Homeland Security funding for Las Vegas; increasing federal grants to Nevada; and water policy in the southwest United States.