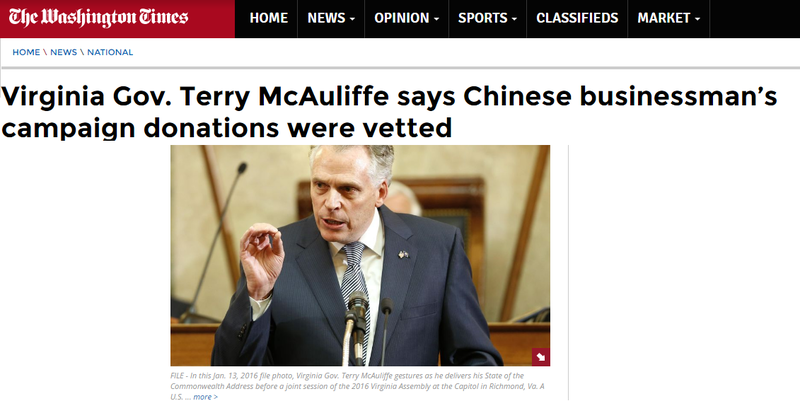 Virginia Gov. Terry McAuliffe on Tuesday said he had never met with the Chinese businessman thought to be at the center of an FBI and Justice Department probe of donations to his 2013 campaign.

The Democratic governor also insisted that reports about the investigation in no way will affect Hillary Clinton’s presidential campaign.

Citing officials who had been briefed on the investigation, CNN reported Monday that authorities are looking into whether donations made to Mr. McAuliffe’s gubernatorial campaign, which appear closely aligned with money given to the Clinton Foundation, violated the law.

Mr. McAuliffe is a close friend of Bill and Hillary Clinton’s, having previously served as a fundraiser for their campaigns and as a board member of the Clinton Global Initiative, an endeavor of their charitable foundation.

The governor was swarmed by reporters and fielded questions about the investigation at multiple events Tuesday. Noting that he had not been in contact with federal investigators, Mr. McAuliffe said all that he knows of the probe was what had been reported by CNN.

“There is no allegation of wrongdoing,” Mr. McAuliffe said. “They are entitled to do an investigation.”

It was unclear what suspected violation triggered the investigation, but CNN reported that authorities apparently are interested in $120,000 worth of donations made to the McAuliffe campaign by Chinese businessman Wang Wenliang.

Mr. Wang, a former delegate to China’s parliament, has made sizable donations to the Clinton Foundation. He pledged $2 million to the foundation in 2013 through his company Rilin Enterprises, according to CBS. Foreign nationals are not allowed to donate to federal, state or local elections.

Mr. McAuliffe said Mr. Wang’s donations to his campaign were vetted by lawyers who concluded that he was eligible to donate.

“I personally didn’t get the check,” he said. “I rely on the people who did the vetting for it, and they said he had a green card from 2007. They have unequivocally said that he was entitled to write a check.”

This wouldn’t be the first time Mr. McAuliffe’s international business connections have come under scrutiny.

Shortly after losing the Democratic nomination for Virginia governor in 2009, Mr. McAuliffe helped found GreenTech Automotive Inc., an electric car company. The company attracted hundreds of thousands of dollars from foreign investors, most of them Chinese nationals, through the federal EB-5 program that grants visas to individuals who invest in companies that promise certain levels of job creation in the U.S.

Mr. McAuliffe resigned from the company in 2012, but the company’s failure to live up to projected production or employment levels became an issue in the 2013 governor’s race, particularly after both the Securities and Exchange Commission and the Department of Homeland Security opened probes of the company.

Last year Mr. McAuliffe’s political action committee, Common Good VA, returned a $25,000 donation from a company with ties to Angola’s state-owned oil company after The Associated Press raised questions about its legality. Federal law prohibits campaigns at any level from receiving money from outside the U.S.