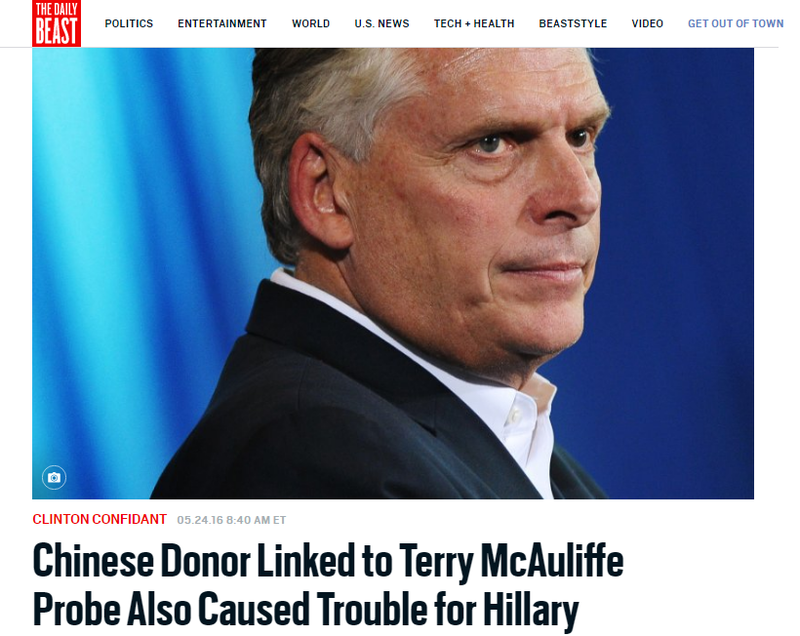 Virginia’s party boy-turned-governor Terry McAuliffe, a longtime friend and confidant of the Clintons, is being investigated by the FBI and Department of Justice for potentially taking illegal campaign contributions.

The governor’s office told CNN, which broke the story, that it was not aware the investigation was under way and that it would cooperate if asked. Details are vague, but the investigation involves Chinese billionaire businessman Wang Wenliang, who now has the rare distinction of causing problems for both McAuliffe and Democratic presidential frontrunner Hillary Clinton. It’s complicated—and it highlights just how much Clinton and McAuliffe’s questionable shared connections haunt their political dreams.

The investigation also involves the Clinton Foundation, according to CNN. CBS reported last year that Wang’s company, Rilin Enterprises, pledged in 2013 to give the organization $2 million. CNN noted that there is “no allegation” of impropriety on the foundation’s part and that McAuliffe formerly served on its board. Last year, the foundation’s decision to accept Wang’s company’s pledge drew pointed criticism because of Wang’s ties to the Chinese government—the billionaire used to be a delegate to the country’s parliament.

The Department of Justice and the FBI both declined to discuss their investigation with The Daily Beast, and a spokesperson for McAuliffe said the governor would cooperate.

Wang and his company have spent big to influence American politics—$1.4 million from 2012 to 2015 to lobby Congress and the State Department, according to CBS’s estimate. And Dandong Port Co., a subsidiary of Rilin Enterprises, has hired former politicos to lobby for its interests, as lobbying disclosure forms show.

It has also shelled out for nongovernmental efforts, including a grant to New York University in 2010 to create a center for U.S.-China Relations, as well as a grant to launch the Zbigniew Brzezinski Institute on Geostrategy at the Center for Strategic and International Studies think tank in 2014.

During McAuliffe’s 2013 gubernatorial campaign, his work with the company became a liability—especially because of allegations that McAuliffe and Rodham used their political connections to unfairly expedite the visa process for their investors. The Department of Homeland Security’s inspector general issued a report in 2015 saying a top official there, Alejandro Mayorkas, made “an appearance of favoritism and special access.”

“Mayorkas intervened in an administrative appeal related to the denial of a regional center’s application to receive EB-5 funding to manufacture electric cars through investments in a company in which Terry McAuliffe was the board chairman,” the report says. “The intervention was unprecedented and, because of the political prominence of the individuals involved, as well as USCIS’s traditional deference to its administrative appeals process, staff perceived it as politically motivated.”

Mayorkas denied the allegations, according to Politico, and hasn’t faced any criminal charges. GreenTech, meanwhile, has also drawn scrutiny from the Securities and Exchange Commission.

McAuliffe’s problems often rope in the Clintons, as in the case of Tony Rodham and GreenTech, because of his longtime status as a close confidant of Bill and Hillary. He co-chaired Bill Clinton’s 1996 presidential re-election bid and Hillary’s 2008 presidential campaign. Bill Clinton has praised McAuliffe as a smooth-talking operator, once saying he “could talk an owl out of a tree,” according to The New York Times.

“Absolutely, I would buy a new car from Terry,” Clinton told Times reporter Mark Leibovich in 2012. “But a used car? I am not so sure about a used car.”