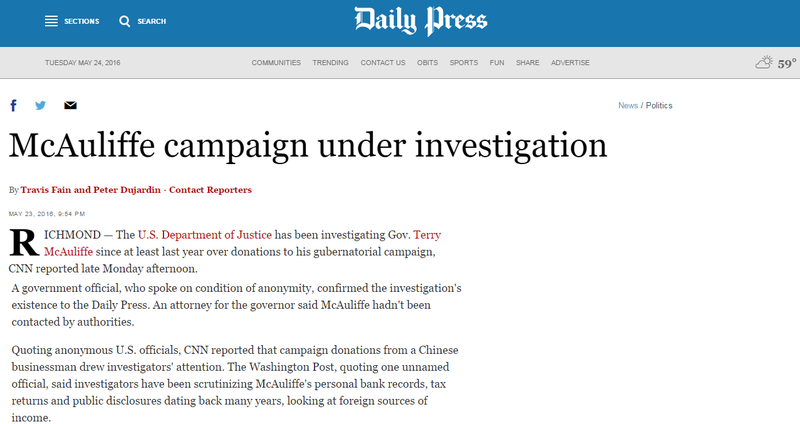 The U.S. Department of Justice has been investigating Gov. Terry McAuliffe since at least last year over donations to his gubernatorial campaign, CNN reported late Monday afternoon.

A government official, who spoke on condition of anonymity, confirmed the investigation's existence to the Daily Press. An attorney for the governor said McAuliffe hadn't been contacted by authorities.

The Post also reported skepticism among prosecutors about whether the investigation would lead to charges.

All reports on the investigation Monday relied on anonymous sources. Spokespeople for Federal Bureau of Investigation, U.S. Attorney and Department of Justice offices in Washington and Richmond declined comment as a matter of policy.

The governor's office referred all questions to Marc Elias, legal counsel on McAuliffe's 2013 campaign, and now general counsel to Hillary Clinton's presidential campaign. Elias said the governor had not been contacted by authorities and that he would "certainly cooperate" if he is.

"Neither the Governor nor his former campaign has knowledge of this matter," Elias said in an email.

CNN said $120,000 in donations from a Chinese businessman named Wang Wenliang drew attention from investigators. The network also quoted a spokeswoman saying that Wang holds U.S. permanent resident status, which would allow him to make such a donation.

Wang's spokeswoman also told CNN that Wang had not been contacted by investigators. Elias told the Daily Press that Wang's contributions "were completely lawful."

CNN also reported that, though the probe focuses on McAuliffe's campaign, investigators have scrutinized his time on the Clinton Global Initiative board, a charitable foundation set up by McAuliffe's close friend, former President Bill Clinton. McAuliffe and CGI share a number of big-dollar donors.

McAuliffe's ties to foreign business have caused controversy before. His political action committee returned a $25,000 donation last year from a company with ties to Angola's state-owned oil company after The Associated Press raised questions about its legality.

These allegations were also an issue in the 2013 governor's race. McAuliffe left GreenTech in 2012.

The Inspector General's report left unclear for whom McAuliffe sought visas through the U.S. government's EB-5 program, which provides visas to foreign investors. McAuliffe said he was simply pushing a slow-moving bureaucracy to move – one way or another – on the long-lingering visas.

After the inspector general's report, some called for a wider investigation, but there is no indication whether Monday's reports are connected to the visa program.

Response to Monday's news focused largely on McAuliffe's connections to the Clintons and the fact that he's apparently the second Virginia governor in a row to garner attention from the U.S. Department of Justice, which indicted former Gov. Bob McDonnell shortly after he left office in 2014.

McDonnell faces a 2-year prison sentence now on federal bribery charges, though his appeal is pending before the U.S. Supreme Court.