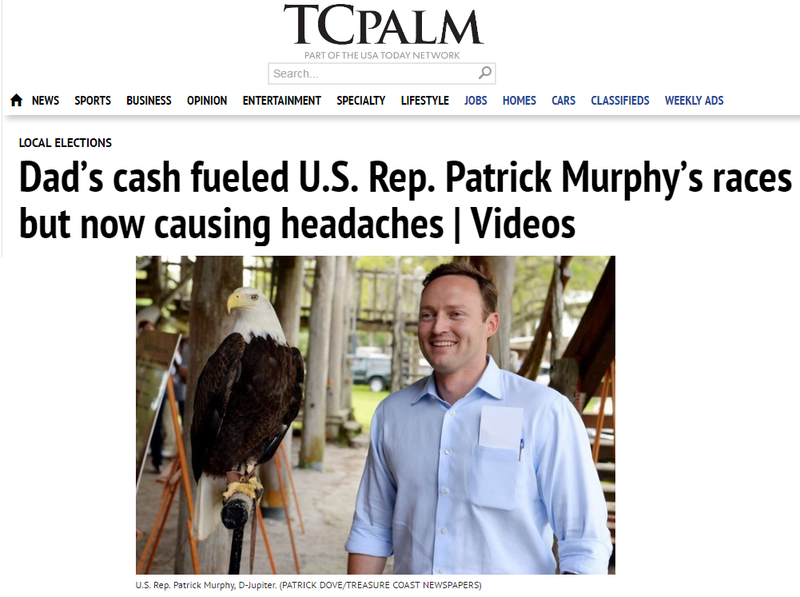 U.S. Rep. Patrick Murphy is good at raising money for his campaigns. His wealthy father is also very good at funneling dollars into his son's races.

That combination has worked for Murphy so far, but now his family wealth and connections to other wealthy donors are coming under scrutiny in his U.S. Senate bid this year.

The Democrat has seen an avalanche of news headlines and political attacks in the last week surrounding: money his family-owned company and father gave to a super PAC that supports him; donations he received from an admitted felon; and a House bill he co-sponsored that would have benefitted political donors and his family business.

Most of these facts aren't new, but Republican groups and primary opponent U.S. Rep. Alan Grayson have latched onto them. The National Republican Senatorial Committee even released an ad Wednesday titled "The Privileged Life of Patrick Murphy."

Yet how much voters are paying attention to the controversy is unclear. If they are, the question is if they care.

"One of the problems with money in politics stories is there are so many of them, voters have just grown numb to it," said Steve Schale, 2012 Obama Florida campaign manager. "It's sort of an expectation at this point."

Recent polls show voters still are largely unfamiliar with candidates running for U.S. Sen. Marco Rubio's open seat. Those polls, however, hint at why Murphy, who represents Martin and St. Lucie counties in the House, has come under fire. He led matchups against five Republicans candidates by a small margin, a Quinnipiac University poll released earlier this month found.

Murphy is the best-funded candidate in the race and his family wealth — or the contributions he took from big donors and Wall Street — didn't hinder him in past elections. He won his first election in 2012 despite media coverage of his father's pouring $550,000 into pro-Murphy super PACs, one of which ran attack ads against GOP opponent and then-U.S. Rep. Allen West. The ads generated controversy in District 18 as it depicted West, who's black, as a boxer punching white women.

Murphy co-sponsored a bill to overturn a 2010 U.S. Supreme Court decision that allowed big donors and corporations to give unlimited cash to super PACs, but defended the fact he's benefitted from the practice.

"Democrats can't fight against the tea party and the Republican Party with our hands tied behind our backs," Murphy said via email.

Schale said voters make decisions based mostly on where candidates stand on issues. American Rising PAC, a group that specializes in opposition research against Democrats, is betting differently.

"Patrick Murphy owes Floridians some straight answers about whose interests he really represents — theirs or his own," spokeswoman Amelia Chassé wrote in a news release.

Here are the issues for which Murphy has been catching heat recently:

Dad's cash: His father, Thomas, and the family's company, Coastal Construction Group, gave $500,000 combined this election cycle to the super PAC Floridians for a Strong Middle Class, which supports him. Super PACs are political action committees that can raise unlimited dollars and run their own political ads in support or against a candidate as long as they don't coordinate with any candidate or campaign. A complaint filed with the Federal Election Commission last week questioned whether Murphy is coordinating with Floridians for a Strong Middle Class because he owns between $1 million and $5 million in Coastal Construction stocks. The conservative-leaning nonprofit Foundation for Accountability and Civic Trust authored the complaint. Murphy denied any coordination and the accusation is an "ugly smear from Alan Grayson and Republican super PACs."

Returned donations: Murphy donated to charity almost $27,000 he received from two donors: a longtime friend who pleaded guilty to assaulting his wife in 2014; and U.S. Rep. Ami Bera's father, who admitted to violating campaign finance law this month by reimbursing his son's donors. The GOP-aligned group Senate Leadership Fund is urging Murphy to return a $100,000 donation that friend, Ibrahim Al-Rashid, made to a pro-Murphy super PAC even though Murphy didn't run the PAC.

Donor swap: Murphy's link to the Beras extends further. Murphy's mother and Bera's parents each maxed out their campaign contributions to their own sons in 2013, then gave the same amount to the congressional campaigns of the other parents' son. Although experts say that's legal, Murphy's opponents said the Beras and the Murphys skirted campaign contribution caps by essentially swapping donations.

Controversial donors: Murphy co-sponsored a bill that would expand the EB-5 immigration program to allow foreigners to apply for a green card in exchange for investing at least $500,000 and creating jobs in the U.S. His campaign and the super PAC that supports him have received money from developers who use the program as a founding source. Coastal Construction Group was named the contractor for a Miami project that will be funded partially with EB-5 money. Murphy told the Tampa Bay Times in April he wasn't aware of Coastal's involvement in EB-5 projects.