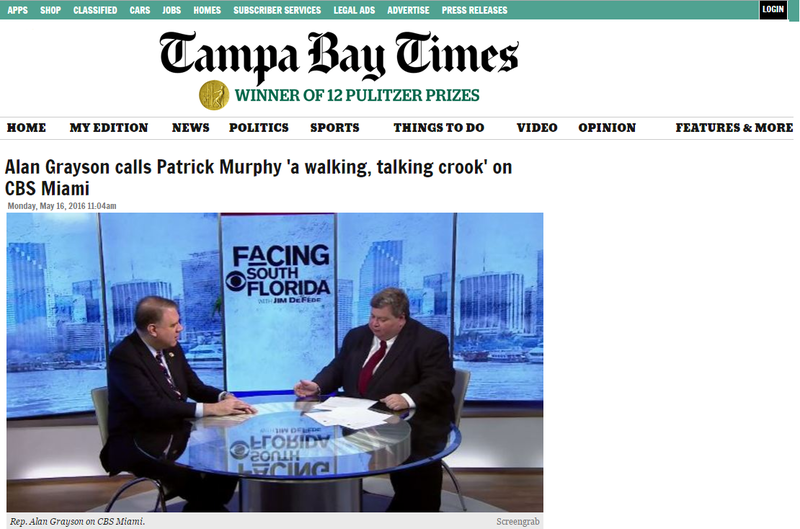 Hot off a combative interview with an MSNBC host on Saturday, Democratic U.S. Senate candidate and U.S. Rep. Alan Grayson had an interesting interview with a Miami news anchor on Sunday morning.

The Orlando congressman's appearance on CBS Miami's "Facing South Florida" was much more tame and wide-ranging, as host Jim DeFede interviewed Grayson about why he's running for U.S. Senate and the various policies he supports.

He accused Murphy of being part of those who have "fundamentally corrupted" the Democratic Party, citing Murphy's father's substantial financial contributions to Democrats over the years.

He also called Murphy a "walking, talking crook," because he owns $5 million in stock in his father's construction company, Coastal Construction, which has taken part in projects that benefit from the federal EB-5 visa program. In 2014, Murphy co-sponsored legislation to extend the EB-5 program.

The subject of a congressional ethics investigation into Grayson's family hedge fund also came up.

In contrast to the MSNBC appearance, Grayson kept his cool as DeFede questioned him about it. But he did offer this colorful soundbite:

The Times reported Grayson's overseas congressional activities were intertwined with his hedge fund, including that a congressional staffer for Grayson separately worked part-time for the hedge fund.

"Do you see why this creates the impression of a problem that your conflating your work as a Senate candidate, as a member of the House and the hedge fund? Where does one end and one begin?" DeFede asked, adding: "Why not keep your staff separate?"

"Because we're talking about one day a week," Grayson said. "None of this was full-time work."

Earlier in the interview, Grayson also spoke at length about his congressional work on Social Security and Medicare.

Murphy's campaign is capitalizing on Grayson's recent TV appearances. In an email blast Monday morning, the campaign announced "Angry Alan's Erase the Record Tour" -- a marketing effort by the Murphy campaign to highlight times when Grayson has "lied" on TV.