The Flipside Of China's Love For American Real Estate 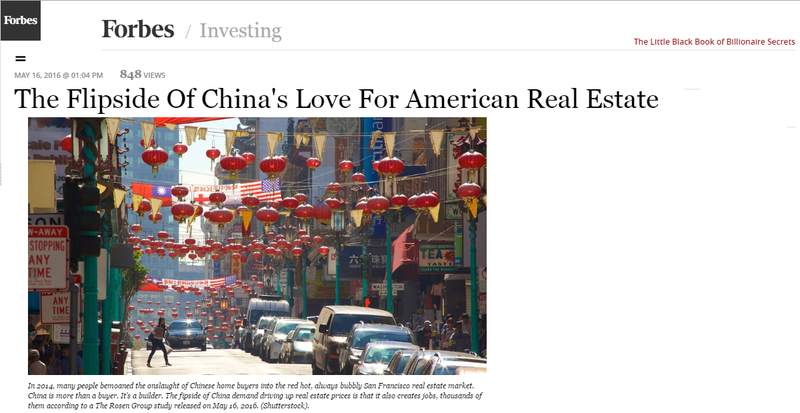 China’s love for real estate knows no bounds. And American cities like the Soma district in San Francisco and downtown Los Angeles are getting more than a skyline make over because of them. They’re getting jobs.

Chinese real estate investment has created over 200,000 American full time jobs over the last six years, and brought in more money from individual foreign investors than any other country. According to the Asia Society, 20,000 Chinese individuals were awarded the EB-5 immigrant investor visa. That’s for people coming to the U.S. with a few million to sink into job creating endeavors, not just house hunting. And within that EB-5 program, China accounts for 70% of the visas. All told, they’ve brought in $9.5 billion into the U.S., or roughly $1 billion per year over the last 10 years.

Individual Chinese buyers spent at least $93 billion on housing here between 2010 and 2015. Spending rose at an annual rate of 20% and lifted demand in many local markets in California post-2008. Chinese corporate investment capital is right behind them. Companies are either buying up real estate landmarks like Anbang Insurance’s multi-billion purchase of the historic Waldorf Astoria last year, to new sky scrapers in Boston’s waterfront district being built, in part, with Chinese investors.

A 112-page report by the Rosen Group, in conjunction with the Asia Society, says that China’s love for housing has had a “significant impact on the U.S. economy and jobs.”

The 2008-09 housing crisis leveled much of the nation’s construction business.  Home builders have yet to recover to pre-crisis employment levels. The National Association of Realtors said in September that home construction lagged behind job creation in 2015 in nearly two-thirds of the 146 U.S. metro areas it studied. Single family home construction remains abysmal as Americans are required to put more money down before buying.

Enter the Chinese. In both the luxury and middle income housing markets, they have been a stabilizer.

The types of projects being funded and built by Chinese investors are much larger than single family construction. These are multi-story properties that have longer construction time lines. The construction crews are larger and needs down the supply chain or bigger, for everything from cement to rebar.

Construction jobs are only part of the picture.

Development of hotel, office, and retail properties keeps permanent jobs in tact, while development of all types creates jobs in building management, according to the Rosen Group’s annual study.

Rich Chinese immigrant investors are required to create 10 jobs for each investment under the EB-5 visa law. Asia Society estimates that Chinese investment through the EB-5 program created as much as 70,000 jobs last year, based on their own methodology.

They estimate that Chinese direct investment into existing U.S. commercial and residential real estate, excluding new development projects, could total at $218 billion from 2016 to 2020. After 2020, Chinese investment in U.S. real estate could accelerate due to a widening pool of Chinese investors looking to take money out of China. Insurance companies have been buyers in order to hold physical assets as a security for their long term insurance accounts. China’s insurance industry is worth about $1.6 trillion. They have invested only a fraction of funds they have available for global real estate, according to the study.

“This wave of China investment is coming from diverse sources in China,” said Arthur Margon, a partner at RCG and one of the authors of the report. “They are a small piece of the potential investor universe.”

Some cities, namely San Francisco, love to blame the Chinese for the high cost of housing there. They forget that there’s this little thing called Silicon Valley that’s the real culprit for middle class housing. And while China’s investments into the U.S. are expected to stabilize if not taper off a bit this year, Chinese real estate investing in the States is a trend that industry experts all agree has another five years to play out.

Chinese-funded projects either under construction or currently in the works totaled $15 billion last year. Someone has to build them. The projects range from multi-billion-dollar mixed-use projects in Los Angeles and the San Francisco Bay Area to smaller-scale developments in secondary markets nationwide.