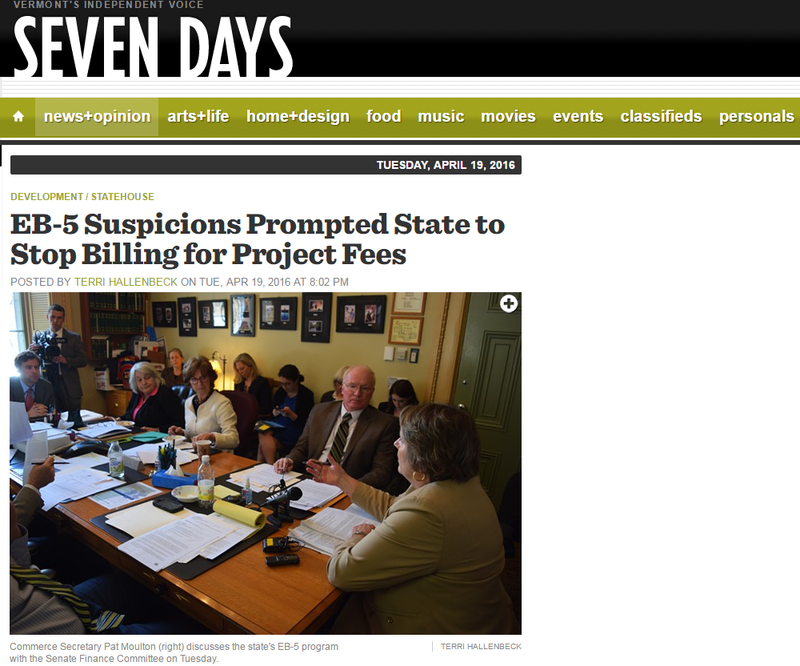 The state stopped billing Bill Stenger and Ariel Quiros for fees on their EB-5 projects last year because of growing concerns over misuse of investors' money, Pat Moulton, secretary of the Agency of Commerce and Community Development, said Tuesday.

Developers are supposed to pay the fees themselves, Moulton said. “We were afraid the money was coming from investors,” she said.

The decision was made about nine to 12 months ago as state officials’ suspicions about the projects were escalating, Moulton told the Senate Finance Committee on Tuesday.

Last week, the U.S. Securities and Exchange Commission filed civil charges against Stenger and Quiros in federal court, claiming they had misused millions of dollars raised from foreign investors through the federal EB-5 investor visa program. The program provides green cards to foreign nationals who invest at least $500,000 in approved economic development projects.

State officials didn’t tell Stenger and Quiros that they’d stopped charging the $1,500-per-investor state fee because they didn’t want to tip the developers off to the investigation of their projects, Moulton said. She said she was unsure how much went unpaid.

Quiros' and Stenger's projects include ones connected to developments at Jay Peak and Burke Mountain ski areas and a planned Newport biotechnology plant.

Senate Finance Committee chair Tim Ashe (D/P-Chittenden) questioned whether they should. Utilities routinely pay the cost of the state regulators who oversee them, he noted.

“I think that’s a reasonable question,” Moulton said, though she called the EB-5 program an economic development tool that may also be worthy of support from state coffers.