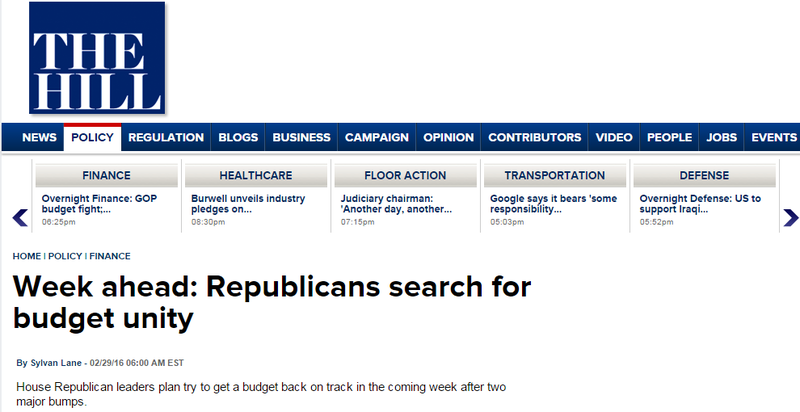 House Republican leaders plan try to get a budget back on track in the coming week after two major bumps.

The conservative Republican Study Committee says it will oppose any budget based on last year's deal struck by then-Speaker John Boehner (R-Ohio) and President Obama. The more than 170 members want Ryan to forge a deal with less spending, which is a nonstarter for Democrats.

This comes after House Appropriations Committee Chairman Hal Rogers (R-Ky.) announced his concerns with part of a tentative plan from the House Budget Committee. The plan calls for sticking with last year's budget numbers but allowing lawmakers to vote on deficit cuts through appropriations bills.
Lawmakers are also heading into crunch time to find a fix for Puerto Rico's debt crisis

The House Financial Services Committee and the Natural Resources Committee examined the fallout and the Treasury's plan Thursday, as Speaker Paul Ryan's (R-Wis.) end-of-March deadline for a legislative plan approaches.

Puerto Rico is saddled with $72 billion in debt across 18 different issuers, exceeding its gross national product. The commonwealth government defaulted on $174 million in payments due in January, with more than $2.4 billion due this year.

Roughly 12 percent of Puerto Ricans are unemployed, and its labor force has lost 300,000 workers since the mid-2000s. The commonwealth's funds have also been depleted by subsidized electricity, government inefficiency and a dysfunctional tax collection system.

The Senate is scheduled to also dive deep into other high-profile economic issues.

The Judiciary Committee plans to investigate areas of the country affected by EB-5 immigrant investor visas amid a fight between Senate leaders over the controversial program.

The Finance Committee is scheduled to look at how trade agreements should be implemented.