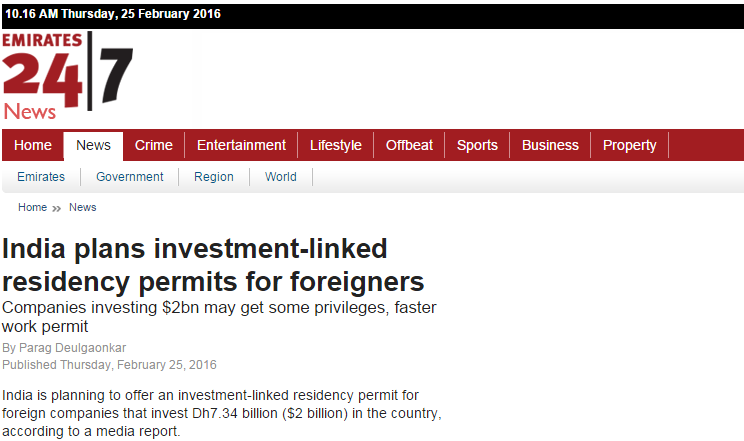 India is planning to offer an investment­-linked residency permit for foreign companies that invest Dh7.34 billion ($2 billion) in the country, according to a media report.

“If a foreign company invests $2 billion, it will get residency permits allowing long stay in India for its key executives as well as cheap rates for utilities and a special package on upscale housing,” the Economic Times reported quoting unnamed senior officials.

The proposal, it said, may be formally unveiled post the budget session of the Indian Parliament, which gets over in mid­-March.

If the proposal is announced, India will join the United States, Canada, Singapore and countries in the European Union that are offering investment-­linked residency facilities.

In the US, a foreigner investing a minimum of $1 million, or $500,000 in some cases, in a project that creates at least 10 jobs can apply for a green card in the US as per the Immigrant Investor Programme (EB-5). However, the report does not say if the residency permits will be linked to foreigners buying property in India. Currently, only Indians can buy property within the country.

The Indian government is also examining ways to smoothen the “work visa” process for all foreign employees of investors.

The report states that the government has been making several efforts to ease security clearances for foreign investors and has cleared 1,671 proposals in 2015, double the number of approvals granted in 2014.