Why is the EB-5 a good business?

The EB-5 investment has been very appealing for the external public. There are millions of investors willing to allocate from $500,000 to $1,000,000 in projects in the USA in order to obtain the right of residence in this country.

Why do they do that?

They´re looking for living in the most stable economy in the world.

They are going to participate in a dynamic economy, where competence and meritocracy are the key foundations to success.

They are accepting the challenges of a culture where the entrepreneurship is celebrated and cultivated.

They are looking for a country that protects acquired assets and richness is a sign of competence and merit.

They are providing their kids with one of the best public school systems and universities in the world.

They are moving to a country where legislation is fair and safe.

They are entering the country through the front door with total freedom of expression and entire religion freedom as well.

After 5 years of residence, they can opt, if they want to, for citizenship in the USA.

And what benefits does it bring to the USA?

Undoubtedly, it has been the best program ever designed to help development in the USA as well as providing jobs through this law of 1990. Its contribution to the American GDP has reached over 4.2 billion dollars and the projects helped generate millions of jobs and these contributed with over 360 million dollars, this result was achieved only between 2011 and 2012 for the IRS.

Nowadays, there are over 700 regional centers working to achieve that.

MB Consulting, LLC conducted an analysis on EB-5 economic impact that examined a selection of projects in numerous industries completed by a variety of regional centers. The study found that 83 regional center projects from across the United States and the Mariana Islands were able to produce $15 billion in investment and create 103,685 jobs from 2011 to 2014.

An additional analysis conducted by Wright Johnson, LLC looked at a variety of EB-5 regional center projects across the United States from 2011 to 2015. The analysis found that the selected regional centers from Washington to Puerto Rico were able to generate $2.5 billion in investment and create an estimated 67,364 jobs.

As data from Wright Johnson, LLC (see Table 1) show, mixed use projects and projects focused on apartments, hotels, manufacturing, and resorts were the most successful in terms of job creation, generating a five-year total of 49,980 jobs. Other industries such as assisted living facilities exhibited steady growth over the same period, generating a total of $89.5 million in EB-5 investment and creating an estimated 2,850 jobs. The Wright Johnson, LLC data show that the EB-5 program helps businesses across a variety of sectors, from real estate, healthcare, manufacturing, and tourism. 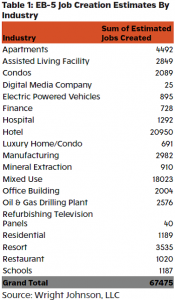 While the hot trend in EB-5 development projects in 2013 was hotels, resorts, and casinos, the increase in non-hospitality developments last year shot up substantially. Data gathered from NES Financial showed that from 2013 to 2014, the number of mixed use developments increased more than 300%, as more and more cities in the U.S. saw a growing demand for them. With vacancies falling and rents rising in a large number of submarkets, demand for these types of buildings is expected to remain at post-recession highs for at least the next two years.