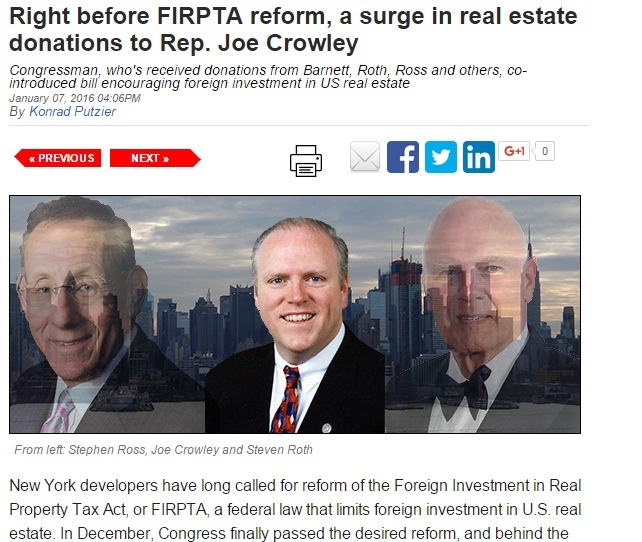 New York developers have long called for reform of the Foreign Investment in Real Property Tax Act, or FIRPTA, a federal law that limits foreign investment in U.S. real estate. In December, Congress finally passed the desired reform, and behind the scenes, industry giants appear to have spent a pretty penny to help make it happen.

In March and April 2015, an unusually large number of the city’s biggest developers made campaign contributions to Joseph Crowley, a U.S. Congressman representing New York’s 14th district. Immediately following the surge in donations, Crowley co-introduced a FIRPTA reform bill that eases up restrictions on foreign investment in U.S. real estate.

The bill, a boon to developers, was repackaged and signed into law on Dec. 18. Its passage, three months after Congress extended the EB-5 visa program, raises further questions about the influence of real estate executives on federal policy.

Like other congressional representatives with ties to New York City, Crowley, a Democrat, has long received substantial donations from the real estate industry. But even by his standards, the spring of 2015 stands out.

On April 29, Vornado’s Steve Roth and Related Companies’ Stephen Ross each gave $5,400 to Crowley. And then, the surge in donations from real estate players stopped as abruptly as it had begun.

On April 30, Crowley and Rep. Kevin Brady, Republican of Texas, co-introduced a bill called The Real Estate Investment and Jobs Act of 2015.

“In a world of fluid global capital, the tax code shouldn’t discourage foreign capital from investing in U.S. commercial real estate, nor discriminate against it with higher taxes than other U.S. investments,” Brady said in a statement at the time.

The reform proposals eventually made their way into the Protecting Americans from Tax Hikes Act, an omnibus bill which was passed on Dec. 18. The new law raises the percentage of a REIT’s shares that foreign investors can buy before a special tax kicks in from 5 to 10 percent. And, crucially, foreign pension funds that invest in U.S. commercial real estate will now be taxed just like domestic pension funds, lowering their bills. Both provisions should boost foreign investment in New York real estate, which is already at record levels.

“The FIRPTA reform bill was first introduced by Rep. Crowley in 2010 – and has subsequently been reintroduced over a span of four sessions of Congress – because it will help strengthen New York’s economy, spur growth, and support union jobs,” a spokesperson for Crowley told The Real Deal.

The spokesperson did not comment on the donations from real estate players. But Crowley’s surge in donations fits a familiar pattern: real estate executives often double down on donations to key politicians and on lobbying efforts in the run-up to important, and often controversial, legislation.

As Politico recently reported, a nonprofit tied to Mayor Bill de Blasio  saw a surge in real estate donations last year as the mayor was preparing proposals to reform the 421a tax abatement program. And firms like Related ramped up their lobbying expenses as Congress was debating whether to extend the EB-5 program, which offers developers cheap financing from foreign investors in return for visas. EB-5 was extended for a year in December, with no changes.