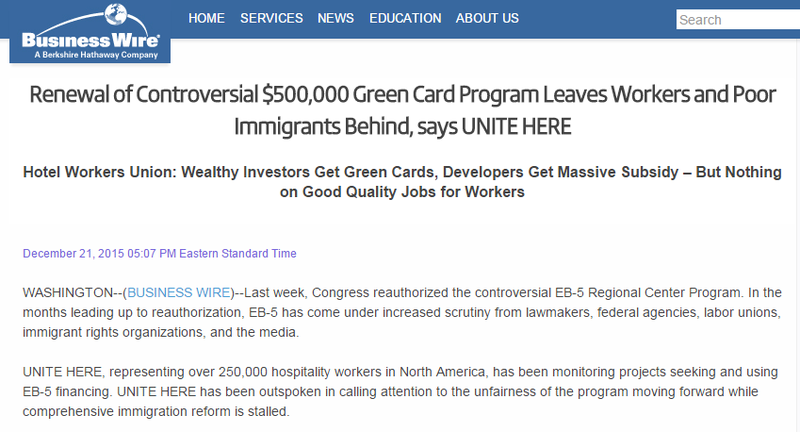 UNITE HERE, representing over 250,000 hospitality workers in North America, has been monitoring projects seeking and using EB-5 financing. UNITE HERE has been outspoken in calling attention to the unfairness of the program moving forward while comprehensive immigration reform is stalled.

UNITE HERE leader Maria Elena Durazo stated: “With EB-5, the US government essentially says to immigrant workers: ‘While you or your loved ones wait for years in limbo to emigrate to the US or to get a green card, rich immigrants are more than welcome to buy a place toward the front of the green card line. And while real estate developers can greatly increase their profits via EB-5 funding, you will have no promise of a good job in one of these projects.’”

As part of the massive Consolidated Appropriations Act, the EB-5 regional center program has been reauthorized for one year, with no changes to the current program.

UNITE HERE says that as EB-5 reform moves forward at the federal level, the organization will continue its efforts to hold developers using EB-5 money accountable to the communities where they are building, and will also work with local, state, and federal decision-makers to advocate for quality jobs for immigrant workers and others at EB-5 funded hotels.