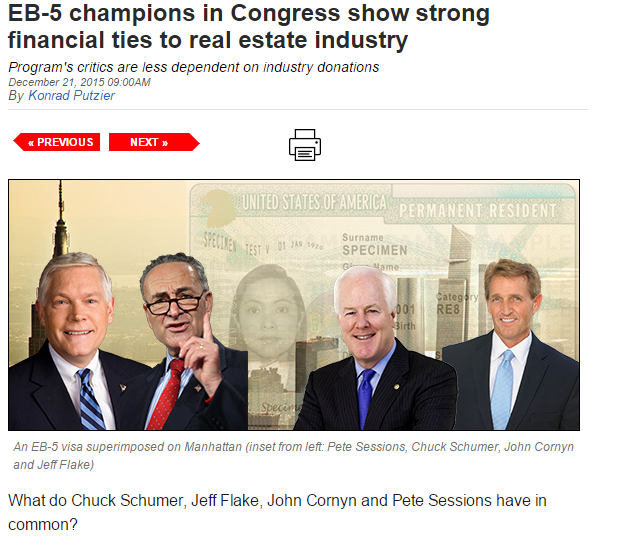 What do Chuck Schumer, Jeff Flake, John Cornyn and Pete Sessions have in common?

This isn’t the beginning of a bad Capitol Hill joke. The four lawmakers all championed an extension of the controversial EB-5 visa program in Congress, and they all received major donations from the industry benefiting most from such an extension – real estate.

The findings, based on data from campaign finance watchdog site OpenSecrets, illustrate the ever-expanding role of industry money in U.S. politics. Schumer, New York’s senior senator, received $1.09 million in campaign donations since 2011 from real estate interests. His fourth-largest individual donor was Fragomen, a firm that claims to be “the world’s leading immigration firm” and has donated $82,200 to Schumer’s campaign committee.

Fragomen has a prominent EB-5 practice, and on its website claims to be “at the forefront of any current or impending changes made to the legislation.” Schumer’s donor list also includes Related Companies and Silverstein Properties, two development firms that have raised serious cash through the EB-5 program.

On Tuesday, Congress renewed the EB-5 program, which gives foreigners green cards in exchange for their investments in job-creating U.S. projects. The program has been widely criticized for funneling cash to luxury real estate projects in prime urban neighborhoods, rather than in low-income areas.

In June, Sen. Chuck Grassley (R) and Sen. Patrick Leahy (D) introduced a reform bill that would have made it much harder for urban development projects to qualify and would have raised the minimum individual investment under the program. Developers like Related, which raised more than $600 million in EB-5 money for its Hudson Yards development, opposed the changes and recently ramped up their lobbying expenses, as The Real Deal reported. The reform did not win enough support, and EB-5 was extended without any changes.
The extension was cheered by EB-5 firms. “Our champions – Senators Cornyn, Flake and Schumer and Congressman Pete Sessions – refused to give up,” Jeff Campion of Pathways EB-5, a firm that manages several so-called regional centers that play matchmaker between investors and developers, wrote in a blog post Thursday. “Please thank them through an email or phone call because without them, there would be no extension,” he added.

These congressmen are in favor of reform, but the reforms they push for don’t address the real estate industry’s ability to use EB-5 funds for projects in prime urban locations like Midtown Manhattan and the Far West Side. On Thursday, senators Cornyn and Flake introduced a bill called the “EB-5 Integrity Act” of 2015 that calls for stricter oversight of regional centers and visa applicants, but the bill appears to have no provision to end the so-called gerrymandering of districts that allows developers to use EB-5 funds in areas like Midtown. In other words: developers would still be able to access EB-5 funds much like before.

Flake in October introduced another bill to reform the drawing of Targeted Employment Areas, or low-income districts where projects can qualify for EB-5 funding. But according to a blog post by immigration expert David North, the bill would “perpetuate the problem” of gerrymandering.
Grassley and Leahy, proponents of more far-reaching EB-5 reform who represent the predominantly rural states of Iowa and Vermont, raised far fewer funds from the industry since 2011 – $67,100 and $31,350 respectively. California’s democratic senior senator Dianne Feinstein, who blasted the EB-5 program, has raised a significant sum, $244,721, from real estate interests. But despite representing a state with several major urban centers, she has raised significantly fewer funds than the three senators — Schumer, Flake and Cornyn — who appear bent on allowing major developers continued access to the program.

Critics of current U.S. campaign finance laws have long worried that politicians could become biased towards the industries that bankroll their campaigns, tilting legislation in favor of well-connected corporations.
Grassley, the EB-5 reform proponent, seemed to make this point in a speech on the Senate floor Thursday. “This failure to heed calls for reform,” he said, according to the Des Moines Register, “proves that some would rather side with special interest groups, land developers and those with deep pockets.”