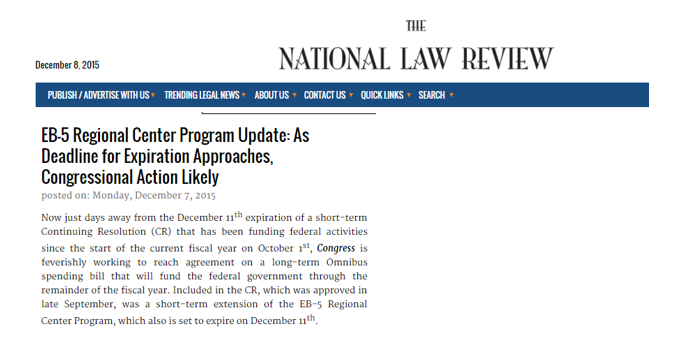 Now just days away from the December 11th expiration of a short-term Continuing Resolution (CR) that has been funding federal activities since the start of the current fiscal year on October 1st, Congress is feverishly working to reach agreement on a long-term Omnibus spending bill that will fund the federal government through the remainder of the fiscal year. Included in the CR, which was approved in late September, was a short-term extension of the EB-5 Regional Center Program, which also is set to expire on December 11th.

Supporters of the EB-5 Regional Centers are currently working to achieve a long-term reauthorization of the program. Key contacts on Capitol Hill involved in the negotiations indicate that a reauthorization and comprehensive reform of the EB-5 program discussed below may be included in the Omnibus spending bill that Congress could consider this week.   However, another possibility that appears increasingly likely could be a simple, “straight” extension of the EB-5 program – free from any substantive policy changes, with the extension tied to the length of the Omnibus. In that scenario, Congress could work toward negotiating a reauthorization and reform measure with policy changes that could be enacted before the expiration of the straight extension.

By way of background, the EB-5 program offers foreign investors an opportunity to secure permanent U.S. residency by making a minimal capital investment of $1 million per investor that also will create at least 10 new jobs for U.S. workers. For investment in a Targeted Employment Area (TEA), i.e. rural and priority urban investment areas, the minimum investment is $500,000. The Regional Centers are private for-profit or government-affiliated entities that receive special designation from U.S. Citizenship and Immigration Services (USCIS) to administer EB-5 investments and oversee job creation.

Competing legislation to reauthorize and reform the regional center program was introduced in the House of Representatives earlier this year by Representatives Mark Amodei (R-NV) and Jared Polis (D-CO), and Representatives Zoe Lofgren (D-CA) and Luis Gutiérrez (D-IL). In the Senate, Judiciary Committee Chairman Chuck Grassley (R-IA) and Ranking Member Patrick Leahy (D-NH) introduced their own reauthorization and reform measure.

With the earlier bills having failed to move, a new bipartisan, bicameral discussion draft is being circulated. The new proposal would extend the program for five years through September 30, 2019, and also tackle many of the concerns raised by program opponents.

Specifically, the new draft legislation would:

As one might imagine, many aspects related to the Omnibus remain fluid.  And as discussed above, given that the discussion draft circulated above has not been vetted by Committee hearings or mark-ups, one possibility remains that the EB-5 program will once again be temporarily extended, giving Congress more time to debate and negotiate potential policy changes to the program.