Mayor of Washington D.C. Muriel Bowser has completed her tour of China with a delegation of over 30 business representatives from US tourism, education and hospital sectors along with four real estate projects who made presentations during the recent Invest in D.C. forum held in Shanghai.

"We had our first forum in Beijing, and we are thrilled by the interest in D.C. projects expressed from Chinese investors," said Bowser, who hopes to build on the successful relationships started by DC Center China in raising awareness of the business opportunities in the US capital city. The acronym D.C. stands for District of Columbia, which is a neutral, federal jurisdiction of the United States Congress.

The public property projects brought by Bowser are currently raising equity investments and EB-5 investments that could provide green cards for foreign investors interested in relocating there. Bowser and her delegation have already secured $155 million in investments for two projects: one to develop the waterfront properties along the district's scenic Potomac River, and the other to build a shopping and retail complex in a low-income neighborhood.

Many Chinese media organizations have based their overseas offices in Washington, while a dozen Chinese technology companies including Huawei have opened new branches in the district. A slow but steady number of smaller Chinese companies have also shown interests in D.C., which Bowser hopes will increase following her visit to Shanghai.

"There are a lot of opportunities for Chinese investors. When we talk about foreign investment, frequently people refer to Middle East investment. We think that Chinese investors haven't fully appreciated the return of investment available in D.C.," said Bowser.

According to Bowser, there is a long tradition of Chinese culture in D.C. due to its vibrant Chinese community there, based primarily in a neighborhood known as China Town. The John F. Kennedy Center for the Performing Arts will celebrate Chinese New Year 2016 with a series of festivities including the Shenzhen Pop Music Show, Beijing Opera, and Chinese Traditional Music by Henan Arts Troupe.

"We also have a traditional New Year's parade hosted by the Chinese Consolidated Benevolent Association of Washington D.C.," said Bowser. "We see people from the surrounding states coming to D.C. to celebrate the Chinese New Year with us in our China Town."

The Chinese New Year celebration is widely publicized by the district government and is celebrated by Chinese and non-Chinese alike. The local government has also made efforts to serve its Chinese community by providing affordable housing in China Town. "There are not as many Chinese people living in D.C.'s China Town as before, so part of the focus of my government is to preserve our affordable housing or else a lot of Chinese residents will no longer be able to afford to live there," said Bowser.

The capital city, located on the American east coast between the states of Maryland and Virginia, is well-known for its multitude of federal government offices and its thriving university communities.

Approximately 220,000 Chinese tourists visit Washington D.C. annually, which is a major tourist destination due to the number of national landmarks including the White House and the National Mall. "China became the number one nation visiting D.C. last year, and it is only going to grow. So we have invested in direct flights with Air China between Beijing and Washington," said Bowser.

The government has also attempted to boost consumerism in D.C. Previously there were only a few small shopping neighborhoods, such as the one next to Georgetown University, but Bowser said that D.C. has vastly improved its hotel and shopping offerings for big-spending Chinese tourists.

"There is a lot of downtown shopping in D.C. now, and everything is quite close because the city is only 66 square miles. With a population of 660,000, we are a very small city compared with Shanghai, which has 22 million people," said Bowser. 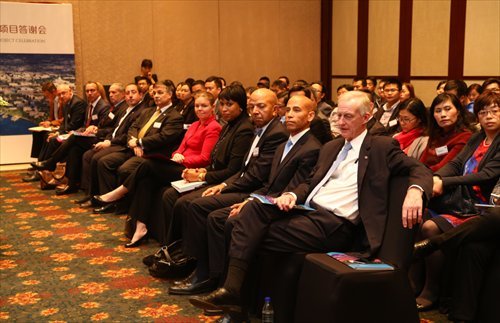 Attendants at the Invest in D.C. forum in Shanghai 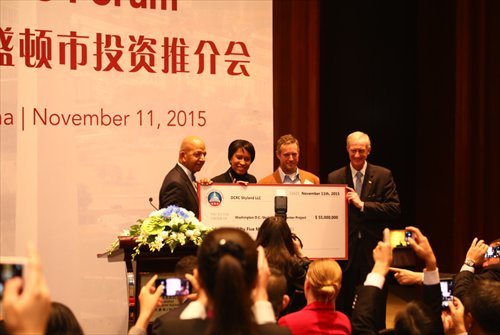 Mayor of Washington D.C. Muriel Bowser (second from left) at the forum 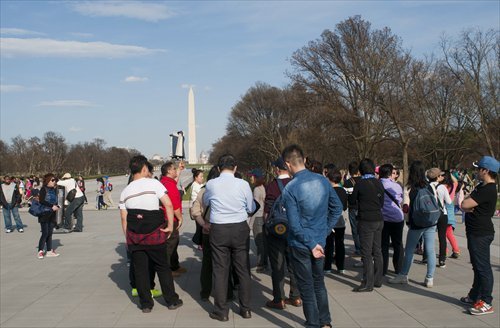