Construction is about to begin on Hotel Paseo, Palm Desert’s newest hotel and the first for its signature shopping district.

City officials – including all five council members – were joined by business owners and others at the ceremonial groundbreaking for the 150-room, three-story Hotel Paseo on Friday morning.

The hotel is unique not only to El Paseo, but the city overall.

While operating under the Marriott brand, its features will set it apart from any other hotels, said Robert Leach, co-developer of the hotel with Dave Worlow.

Leach is based in El Dorado Hills in Northern California and Worlow is a longtime Coachella Valley resident.

“You will never walk into this hotel and see what you have seen anywhere else in the world,” Leach vowed.

On Monday, crews will begin watering down the ground and once it’s sufficiently compacted – in about 10 days – construction will start on the underground parking garage, Worlow said.

The first guests are expected to check in by February 2017.

The $36 million boutique “four-star” hotel is going on the vacant lot at 45-400 Larkspur Lane, which for 10 years has been home to the big white tent that housed Fashion Week El Paseo. 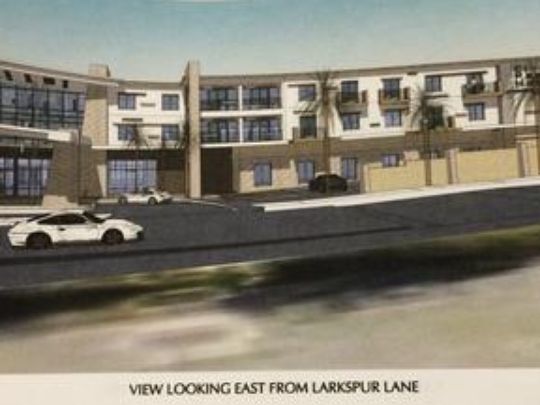 Developers of the new Hotel Paseo on El Paseo in Palm Desert say the 150-room boutique hotel will be unique to the desert.

The 10-day event that draws thousands from all over the world every March will move across the street to the top level of The Gardens on El Paseo parking structure, said Ruth Ann Moore, economic development manager for the city.

El Paseo business owner and longtime Palm Desert Planning Commissioner Sonia Campbell said the hotel is a much-needed complement to the high-end shopping district many dub as “Rodeo Drive of the Desert.”

“There is going to be more traffic, more customers … all because we finally have that hotel up,” said Campbell, owner of Spectacular Shades.

It is hoped the increased foot traffic from the hotel will also encourage retailers to stay open later, something the city and shoppers have long sought, Campbell said.

Hotel Paseo will feature a pool, spa, dining, ballroom and meeting rooms along with valet and underground parking and 24-hour room service.

Indian Wells-based Watkins Landmark Construction will build the hotel, which was designed by Gene Fong Associates of Westwood.

Hotel development is being funded through the federal EB-5 Immigrant Investment Program, which offers visas to investors willing to invest in job-creating businesses.

Mayor Susan Marie Weber said the hotel will not only offer guests easy access to the art galleries, shops and restaurants on El Paseo, but a spectacular view of the mountains as well.

“We think it’s dramatic and tangible evidence that our city is making progress toward its vision … to create a vibrant and walkable downtown,” the mayor said.

The hotel has been in the planning stages for nearly 10 years.

Leach recalled that it was Worlow who approached him with the idea of building a hotel.

“In the midst of the recession, he called me and said, ‘Hey, I know this is not a good time to call, but I think I’ve got the coolest hotel site anywhere in Southern California,’” Leach recalled.

“I hopped a plane, flew down and said, ‘Wow. This is really impressive,’” he said.

In the seven years since receiving city approval for the project, developers met with nearby residents and changed the design from 154 condominiums to 150 rooms; moved a roof-top bar and pool area to ground level; and reduced the overall square footage from 114,000 to 98,000.

They also knocked it down a story from its original four levels, Leach said.

“It’s going to be a great hotel,” Spiegel said.

“We still need about four more; we plan to catch up with Palm Springs,” he said, smiling.