The famous three-pointed star adorns this rendering of the new Mercedes-Benz Stadium, which will be the $1.4 billion home of the Atlanta Falcons and Atlanta United.

Perhaps the second time will be the charm for a Hard Rock Hotel near downtown Atlanta.

Hard Rock International and the city of Atlanta announced plans Monday for a 220-room hotel near the new Atlanta Falcons stadium in the Castleberry Hill neighborhood. It will rise along Centennial Olympic Park Drive.

Jim Allen, chairman of Hard Rock International, actually broke the news today during testimony before a legislative hearing on casinos in Savannah. He spoke on behalf of gambling, but said the new Hard Rock Hotel will come to Atlanta whether casinos are approved or not.

A previous attempt by a development firm to build a Hard Rock Hotel downtown fizzled out with the recession. 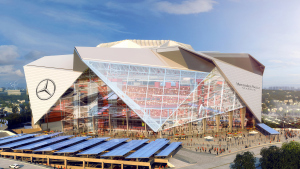 But development interest in the city’s core is surging.

Mayor Kasim Reed and the Hawks confirmed talks last month about a deal to renovate the Philips Arena. Reed called it a $150 million to $250 million project that might, among other things, undo the wall of suites that is out of fashion in the NBA.

At the time he also hinted at $500 million to $1 billion in new development in the pipeline around the Philips Arena area.