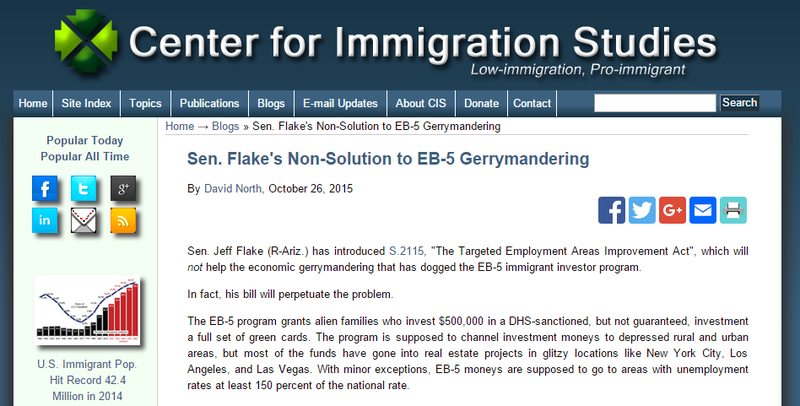 Sen. Jeff Flake (R-Ariz.) has introduced S.2115, "The Targeted Employment Areas Improvement Act", which will not help the economic gerrymandering that has dogged the EB-5 immigrant investor program.

In fact, his bill will perpetuate the problem.

The EB-5 program grants alien families who invest $500,000 in a DHS-sanctioned, but not guaranteed, investment a full set of green cards. The program is supposed to channel investment moneys to depressed rural and urban areas, but most of the funds have gone into real estate projects in glitzy locations like New York City, Los Angeles, and Las Vegas. With minor exceptions, EB-5 moneys are supposed to go to areas with unemployment rates at least 150 percent of the national rate.

The device that has allowed this diversion of investments is the manner in which Targeted Employment Areas (TEAs) are defined. The EB-5-funded developers are currently allowed to design their own TEAs; these are often a chain of census tracts that reach from the prosperous neighborhood where the money will be spent, usually on real estate, to distant neighborhoods with high unemployment. In many cases, the linkages between tracts are through and along rivers, parkways, and in one case, Central Park in New York City.

CIS created a map nearly two years ago that showed how an acceptable-to-DHS TEA could be constructed that would allow EB-5 money to be spent in the immediate neighborhood of the White House, one of the nation's least poverty-stricken areas.

The EB-5 gerrymandering is so bad — and so conducive to graphic illustration — that two of the largest mas-migration dailies, the New York Times and the Wall Street Journal, have both published damning stories on the subject.

Sen. Flake (of Gang of Eight fame) has introduced a bill that, to quote the National Law Review:

Defines "high unemployment area" as follows: a "census tract or group of census tracts that are economically integrated" and which take into consideration commuter flow patterns that meet the unemployment threshold of 150 percent of the national unemployment average.

An area designated as a targeted employment shall be valid for five years, with the possibility for renewal in five-year increments.

This proposal would create a situation where clever economists with census tract maps could define "commuting patterns" to create TEAs much like the current ones.

And once in place, they would be easily renewable for five years at a time.

TEAs are supposed to be reviewed by state officials, and they are. But what state official would veto a TEA when that would deny foreign investment in a location in his or her home state? To my knowledge, no TEA has ever been vetoed by a state official.

The heart of the EB-5 program is set to expire on December 11, as we reported earlier; I would strongly prefer that it does, in fact, expire. But if it is to be continued it should be amended so those investment funds go to really depressed areas, such as Appalachia, Indian reservations, or other distressed rural areas, and with tough rules that would keep those alien moneys away from Park Avenue.