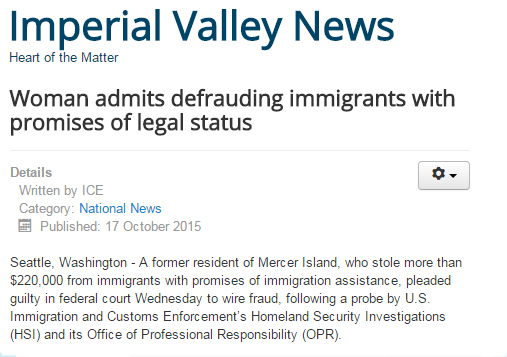 A former resident of Mercer Island, who stole more than $220,000 from immigrants with promises of immigration assistance, pleaded guilty in federal court Wednesday to wire fraud, following a probe by U.S. Immigration and Customs Enforcement’s Homeland Security Investigations (HSI) and its Office of Professional Responsibility (OPR).

Dalia Ivette Singh, aka Dalia Pena, 61, who most recently resided in Clearwater, Florida, defrauded more than 40 immigrants from the Caribbean and Latin America. Singh charged some families as much as $36,000, claiming she had a contact with U.S. Citizenship and Immigration Services (USCIS) who could provide the immigrants with legal status in the United States. Singh claimed her USCIS contact ran a special program the immigrants could use to get legal status. There was no such program and no USCIS contact – Singh fabricated the story to defraud the victims. Singh’s sentencing before U.S. District Judge Richard A. Jones is scheduled for Jan. 22, 2016. The case is being prosecuted by Assistant U.S. Attorney Erin Becker.

“This defendant preyed on victims whose dream was to become a U. S. citizen,” said U.S. Attorney Annette L. Hayes. “Although she held herself out as someone who could help, she never did, and instead took advantage of the victims’ church affiliations and networks of friends to enrich herself.”

According to records, between 2008 and 2011 Singh represented to various people that she could assist them with obtaining legal status in the U.S. The victims were immigrants who did not have legal status in this country. The defendant claimed she had a contact at USCIS who could provide legal status if the victim would pay Singh a $5,000 fee. Singh claimed the immigration program required enrollment of a group of people, not just individuals, and so she encouraged victims to recruit more people to enroll with them. In one instance, Singh defrauded about 30 members of a church out of nearly $100,000 with her false promises.

“Those who profit by preying on vulnerable members of the immigrant community will pay a hefty price for their crimes,” said Shawn Fallah, resident agent in charge of OPR in the Pacific Northwest. “We’re committed to safeguarding the public from scam artists and others who exploit people’s false hopes for no other reason than to enrich themselves.”

Under the terms of the plea agreement, Singh will pay $222,900 in restitution. Prosecutors will recommend 18 months in prison and Singh will request no less than one year in prison. Judge Jones is free to impose any sentence up to the 20 year maximum allowed by law.