UCI oddity a gift for developer 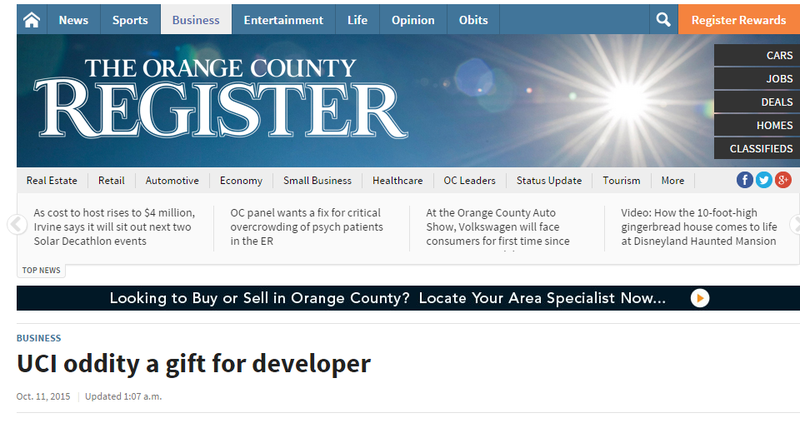 How could Orange County’s highest unemployment rate be at the leafy UC Irvine campus, set amid some of the lushest, priciest neighborhoods in the region?

The answer is, it’s not.

State officials determined that in 2012 the jobless rate for the census tract encompassing the top-rated university was 27.8 percent – the highest in the county that year and four times greater than federal figures reported for the same tract.

David Dahlberg, a manager with EDD’s Labor Market Information Division, was at a loss to explain UC Irvine’s excessively high unemployment rates prior to 2013.

But unemployment figures for UCLA and UC San Diego also had similar drops after the methodology changed in 2013.

He guessed the anomalously high unemployment rates at UC campuses may have been tied to how students were counted during the 2000 census, upon which the 2012 numbers were based.

“In a dormitory environment, it’s a tough job,” Dahlberg said.

The 2012 number served as the basis for the state’s April 2014 decision to certify the Pasea TEA.

Had the Pasea EB-5 project been formed one year later, it would not have qualified for “Targeted Employment Area” status and Civitas would have had to round up foreign investors at the higher minimum of $1 million apiece.

“It is our experience that colleges tend to have higher than average unemployment. Lots of students by definition don’t work,” Drexell Owusu, Civitas’ managing director, said in an email.

But, he conceded, “high unemployment does not necessarily equate to blight.”

“This has nothing to do with why you would want to fund an EB-5 project,” Policano said.

“These are not people who are very likely to work” at the hotel site.

Since the state is standing by its unemployment numbers, there doesn’t appear to be a problem for the Pasea investors.

But a spokesman for the U.S. Citizenship and Immigration Services, which administers the EB-5 program, said they could have to increase their investment to $1 million should questions about the validity of the TEA arise.

“We relied on the data they gave us,” Owusu said. “I’m hoping we get some sort of dispensation for our 29 clients.”