As immigration continues to be a hot-button campaign issue, a lesser-known federal program called EB-5, which allows wealthy foreigners to obtain green cards by investing in development projects in the United States, is currently in the midst of a debate over renewal and reform. The small number of foreigners who qualify and take advantage of the program—roughly 11,000 applied last fiscal year—belies its massive impact, which could top $4 billion in real estate investments if all the projects move forward, according to The Wall Street Journal. With the program aleady funding developments from coast to coast, it's become an issue in the House, as urban representatives fear the loss of a potential source of development funds. 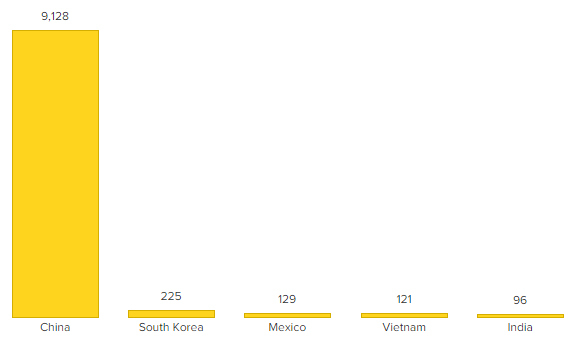 A chart from The Atlantic showing the nationalities of those applying for EB-5 visas.

The foreign investors taking advantage of EB-5, which was established in 1990, invest a set amount of money ($1 million) in a project that's supposed to create 10 jobs. It's often seen as a way to get around more lengthy routes to citizenship, and since it allows family members of investors to obtain conditional visas, the program is also seen as a way of helping the next generation. One of the main controversies over the law is an exception that allows candidates to invest $500,000 in "Targeted Employment Area," ostensibly to fund rural development. However, most of these areas are actually poor urban districts, which attract investment in hot real estate markets such as New York and San Francisco.

According to Edward Mermelstein, an international real estate attorney who has previously worked with numerous high net-worth Chinese investors, the program is ultimately a cheap source of construction funding. He points to the role it played during the fallout from the great Recession, when foreign funding helped pump money into an ailing construction sector.

"It's an expedited road to a green card, nothing more than that," he says. "To call it an investment is an overstatement. We're the least expensive country in terms of a pay-to-play scenario for residency."

That said, Mermelstein sees this as a boon to the country, especially the major metropolitan areas where many of the EB-5-supported projects are happening.

"The type of investor who uses this is the kind of investor we'd want to live in the United States, people of means who are supporting our economy," he says. "You'd be crazy not to continue this program."

Congress, unable to agree on comprehensive reform or new parameters for EB-5 , recently extended the program through December 11 (it was set to expire at the end of September). Mermelstein believes the program will undergo alterations before being extended, including a higher minimum investment.