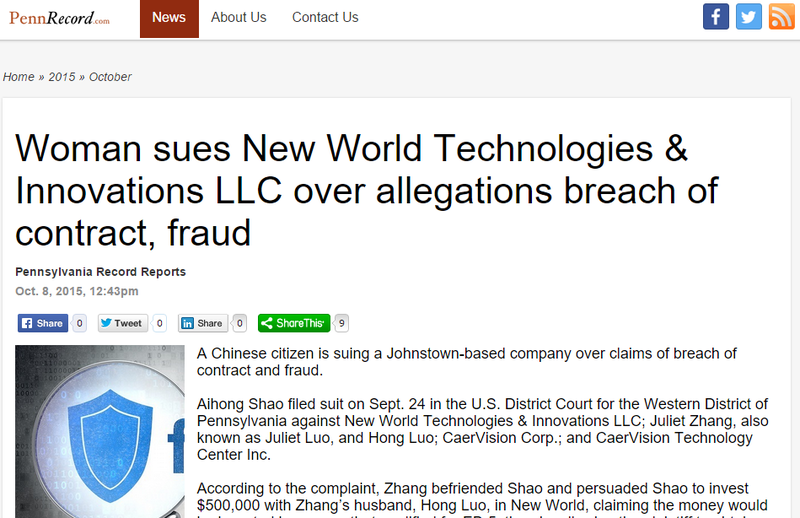 A Chinese citizen is suing a Johnstown-based company over claims of breach of contract and fraud.

According to the complaint, Zhang befriended Shao and persuaded Shao to invest $500,000 with Zhang’s husband, Hong Luo, in New World, claiming the money would be invested in manner that qualified for EB-5, thereby allowing the plaintiff to obtain permanent residency in the United States.

On June 4, 2009, the defendant allegedly handed the joint venture agreement to Shao in Chengdu, China. Before the plaintiff signed the agreement she expressed concern of not getting back the amount she would be investing. Zhang offered to secure the return of the investment by Zhang’s interest in real property. On June 4, 2009, the agreement was signed, the complaint states, and Shao wired the money to a bank account for New World.

The complaint states that Zhang retained attorney David Lu to submit on behalf of Shao an application for permanent residence, and an I-526 immigration petition was filed on Sept. 30, 2009. Shao paid $20,000 for Lu's services. However, the complaint states that numerous false errors were made on the application, including listing that Shao was president and chairman of New World, and Shao's signature was forged. Shao's residency and application was initially approved, but later revoked in April 2012.

Shao is seeking $520,000 plus damages, costs and attorney fees. She is represented by Gregg Kanter of the Gregg H. Kanter Law Office of Philadelphia.