Fate of controversial US immigrant investor program up in air

A program that lets wealthy individuals live in the U.S. in exchange for investment is about to end, unless Congress decides to extend it or make it permanent. Though proponents say the arrangement helps to revive local economies, critics have called for tougher controls due to concerns the system could be exploited.

China is keeping close tabs on the debate, since Chinese "immigrant investors" form the largest group.

In 1990, Congress introduced the EB-5 Immigrant Investor Program as a temporary measure to stimulate the economy through capital investment and job creation. Under the program, applicants are required to invest at least $1 million in a commercial enterprise in the U.S. -- or a minimum of $500,000 if the business is in a "targeted employment area." They must later show that they have created or preserved 10 full-time jobs for American workers. In return, the U.S. grants green cards to applicants and their family members.

In September 2012, U.S. President Barack Obama signed a resolution extending the EB-5 program until the end of this month.

In a sense, the program allows affluent foreigners to buy U.S. permanent residency. Normally, it takes a number of years for immigrants to acquire green cards; the EB-5 system shortens the waiting period to as little as two years.

Meanwhile, the U.S. secures funds for creating jobs and building infrastructure. In Seattle, for example, an urban redevelopment project taking place near CenturyLink Field -- home of the Seattle Seahawks football team -- is being partially financed with money from Chinese immigrant investors.

To facilitate investment, more than 600 regional centers were set up to channel money into target projects around the country. Experts say the EB-5 program has brought more than $14 billion worth of direct investment into the U.S.

Early on, the program attracted fewer than 1,000 applicants annually. But the number soared in recent years and hit the upper limit of 10,000 for the first time in the fiscal year through September 2014. Chinese immigrant investors made up nearly 90% of the total, up from 10% a decade earlier.

The sharp increase in the U.S. is partly attributable to Canada's decision to end a similar system in February 2014. America's neighbor to the north concluded that immigrant investors had produced few economic benefits. Tax revenue did not grow as much as expected, and in some cases, the influx of Chinese immigrants stoked tensions in local communities.

Ottawa's move left well-off Chinese with one fewer option for shielding their money from their country's darkening economic prospects. In principle, the Chinese government allows its citizens to shift only $50,000 abroad in a given year, but there are many loopholes.

According to statistics by the United Nations, a total of 4.08 million Chinese emigrated over 10 year period until 1990, but the number was up to 9.34 million in 2013. 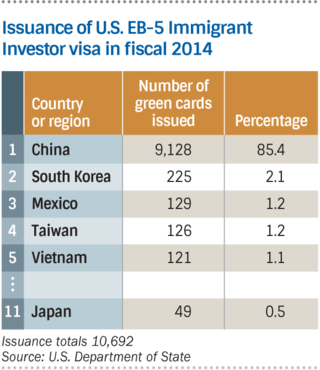 But is there more to the surge than economic gloom? Experts say not a few Chinese government officials have applied for the EB-5 program amid the pressure of President Xi Jinping's anti-corruption crackdown.

In the U.S. government and Congress, alarm bells are ringing. In August, the U.S. Government Accountability Office issued a report citing instances where applicants may have obtained their investment funds from "illicit sources." The office warned that the EB-5 program poses a real fraud risk.

According to media reports, the U.S. Securities and Exchange Commission received more than 100 tips and complaints related to possible fraudulent securities transactions and the EB-5 program from January 2013 through January 2015. The U.S. Department of Justice in March accused one Chinese bureaucrat and his ex-wife of fraudulently acquiring green cards through the EB-5 program and laundering money .

Despite such misgivings, lawmakers in both houses of Congress have submitted bills aimed at making the program permanent and eliminating caps on visa issuances for individual nationalities. At the same time, proposals call for raising the minimum investment to $800,000 and closely monitoring the flow of funds.

The congressional deliberations have made little progress. On Sept. 22, the Senate proposed a short-term extension of the program to Dec. 11, but the fate of the system remains uncertain.