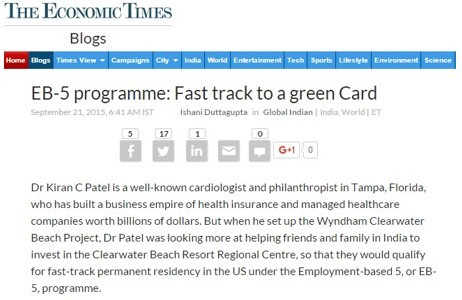 Dr Kiran C Patel is a well-known cardiologist and philanthropist in Tampa, Florida, who has built a business empire of health insurance and managed healthcare companies worth billions of dollars. But when he set up the Wyndham Clearwater Beach Project, Dr Patel was looking more at helping friends and family in India to invest in the Clearwater Beach Resort Regional Centre, so that they would qualify for fast-track permanent residency in the US under the Employment-based 5, or EB-5, programme.

Dr Patel has himself invested $50 million as the developer of this project. “The project is already around 30 per cent complete and should be ready by January 2017. For EB-5 investors from India, it provides a safe project to put their money, which is often a concern for applicants of EB-5,” Dr Patel told ET. 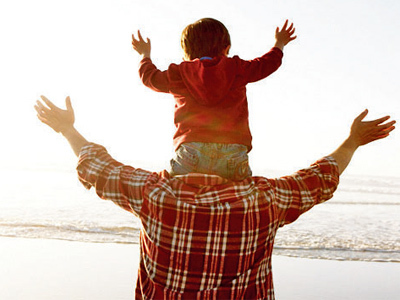 EB-5 applicants, or immigrant investors, need to provide proof of $1 million worth of net assets owned by them anywhere in the world which they need to invest in a new commercial venture in the US for five years and employ at least 10 US nationals. This leads to a conditional green card valid for two years. After that, upon making an application and showing that all conditions are fulfilled, the applicant’s green card becomes permanent.

Along with the investor, his/her spouse and unmarried children below the age of 21 years are also granted dependent immigrant visa and two years conditional green card which can be made permanent later.

If the investment is made in a new commercial enterprise in a remote area or targeted employment area, then the amount of investment is reduce to half – half-a-million dollars. Under the EB-5 pilot programme, the investment has to be made in an approved regional centre and the investor is not required to carry on business directly, and employ 10 people. The regional centre does this. “With a regional centre like Clearwater Beach Resort, the investors from India are assured of the safety and security of their investments. In fact, we already have around 20 EB-5 applicants from India who have invested in our project. It is very likely that they will have to wait for a much shorter time than the usual 14 months to receive their EB-5 approvals to move to the US because the due diligence on the project has already been done,” Dr Patel said.

He said that Indians are not as enthusiastic about the EB-5 programme because they are more conservative about their investments than the Chinese investors. “However, this programme is a good option for many Indian entrepreneurial families who are looking for a US college education for their children. As investor immigrants, they will be paying much less college fees than Indian citizens,” he said.

Mumbai-based immigration lawyer Sudhir Shah, too, feels that the EB-5 is a good option for those Indians who are looking at US as a destination for higher education for their children. “For people in India who have clean funds to invest, EB-5 provides a very good fast-track route to the US. In fact, my client Mayank Patel, who was a professional in Australia and could provide the necessary documents with his EB-5 application, the approval came as quickly as two months after his application,” Shah said.

He is, however, worried about the future of the programme which ends on September 30, 2015, after which the US Congress is due to take it up for reauthorisation. “Considering that many in the US oppose the programme, we have to wait and see what shape EB-5 will take after that,” he says.