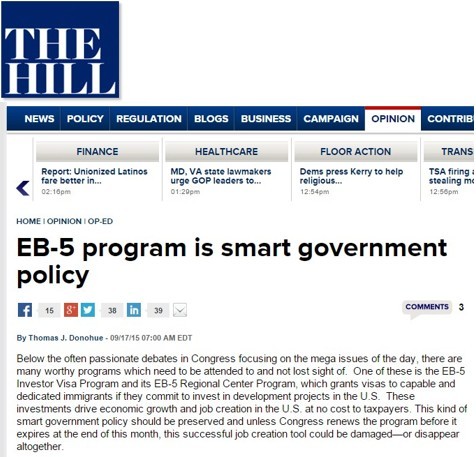 Below the often passionate debates in Congress focusing on the mega issues of the day, there are many worthy programs which need to be attended to and not lost sight of.  One of these is the EB-5 Investor Visa Program and its EB-5 Regional Center Program, which grants visas to capable and dedicated immigrants if they commit to invest in development projects in the U.S.  These investments drive economic growth and job creation in the U.S. at no cost to taxpayers. This kind of smart government policy should be preserved and unless Congress renews the program before it expires at the end of this month, this successful job creation tool could be damaged—or disappear altogether.

Under current law, the program allows foreign investors to obtain permanent residency by investing at least $1 million in U.S. projects that will generate at least 10 new jobs for American workers. In rural or high unemployment areas—where project financing is often scarce—investors are only required to invest $500,000 to qualify under the program. The program, which awards 10,000 visas a year, helps direct global capital into our economy rather than our competitors’ economies.

The program has a strong track record of generating investment and job growth. A recent study commissioned by the EB-5 Investment Coalition found that between 2005 and 2013, the EB-5 program generated $5.2 billion in foreign direct investment for U.S. projects. In 2013 alone, foreign investors pumped $1.6 billion into the U.S. economy through the program. Many EB-5 projects are still being implemented, but when they are completed, the money provided by these foreign investors could help create 31,000 new jobs for Americans. Moreover, EB-5 investments have financed projects that might not otherwise have secured the capital needed to make it past the planning stage.

The list of projects that have been fueled by EB-5 investments is deep and diverse, including construction of hotels, schools, technology centers, and nursing homes across the country. The program has also provided funding for multiple infrastructure projects, such as port expansion in Baltimore or the building of a highway interchange in Southeast Pennsylvania. If Congress fails to renew the EB-5 Regional Center Program, these and other significant economic development projects, along with thousands of pending investor petitions, will be stopped in their tracks. There is no justification for allowing it to lapse.

Now, even a good and worthy initiative can be improved, and this one is no exception. The U.S. Chamber of Commerce and other industry groups support reforms to prevent fraud and abuse. The handful of bad actors who have engaged in misconduct must be held accountable and we should work to prevent future abuses of the program, but that should not cause an overreaction by Congress.  The program should be updated to ensure proper oversight, security, and integrity.  However, any changes should not hamper economic development.

Undermining the program’s positive economic impact or interfering with the market-based approach that has made the Regional Center Program so effective would be unfortunate. Efforts by Congress to direct EB-5 investment into certain areas at the expense of others would be an unwelcome development, considering the program was designed to be national in scope and focused on the goal of job creation, not creating jobs in politically-favored areas. Congress’s role should not expand to picking winners and losers or tilting the playing field; all worthy projects should be given due consideration.

Other concerns are focused on how to properly account for jobs created by the EB-5 investments. We share the concerns of members in Congress that job creation needs to be properly verified, but efforts to unreasonably limit or restrict which jobs can be counted are misguided.  The focus of the program always has been and should remain on job creation—not on where those jobs are created.

Finally, there are currently more than 13,000 EB-5 applications pending approval. They should not be subject to any changes that may be incorporated into the program through reauthorization—such as increases in minimum investment amount. Suddenly upping the ante for investors who are already in the process and following the rules would unfairly penalize them and could disrupt both current and potential projects.

The U.S. Chamber appreciates the bipartisan efforts of lawmakers in both houses of Congress who are working to reauthorize the EB-5 Regional Center Program—along with three other key immigration initiatives, including E-Verify—ahead of the deadline. As negotiations move forward, we urge them to make thoughtful, measured reforms that will maximize foreign investment in the United States, not undermine it.

Smart government policies—backed by facts, data, and statistics—are needed now more than ever to ensure that the United States can compete in the global marketplace to attract foreign capital and help finance projects that put Americans to work.

Donohue is the president and CEO of the U.S. Chamber of Commerce.