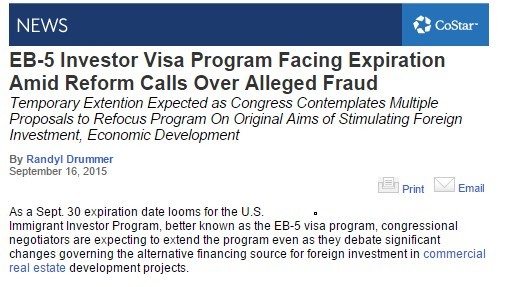 As a Sept. 30 expiration date looms for the U.S. Immigrant Investor Program, better known as the EB-5 visa program, congressional negotiators are expecting to extend the program even as they debate significant changes governing the alternative financing source for foreign investment in commercial real estate development projects.

The EB-5 regional center investment program, which allows foreign nationals to bypass long waits and obtain green cards in exchange for investing in U.S. job-creating ventures, is scheduled to sunset on Sept. 30 unless lawmakers pass either a reauthorization or extension as part of what will likely be a continuing resolution to keep the federal government running beyond the end of the month.

Bills have been introduced in both the House and Senate to extend and improve the program, but a temporary extension is more likely as the countdown to a potential government shutdown occupies the full attention of Washington lawmakers.

Investment sponsors have used the program to fund an array of commercial property developments in recent years, including multifamily, hotel and office projects. The previously obscure EB-5 program has increasingly drawn the attention of the biggest and most active developers in the nation, including Related, which is using the program to raise capital for the initial phases of its Hudson Yards project in Upper Manhattan.

Under EB-5, foreign nationals, their spouses and unmarried children under age 21 are eligible to apply for green cards in exchange for investing in a new real estate project or other commercial enterprise in the U.S. that creates or preserves at least 10 full-time jobs.

The minimum investment amount is $1 million, or $500,000 if the project is located in a "targeted employment area" (TEA), or in a rural area with an unemployment rate of at least 150% of the national jobless rate.

These job and investment thresholds, along with alleged attempts to stretch or "gerrymander" TEA boundaries, and scams in which individuals or companies that purport to administer the program have fraudulently raised, stolen or diverted funds for their personal use, have brought bipartisan criticism and calls for reform on Capitol Hill.

Even EB-5's most ardent supporters say rule changes are necessary to deter fraud and ensure that urban, suburban and rural areas have a fair shot at competing for EB-5 capital.

Meanwhile, Real Estate Roundtable, a real estate lobbying group in Washington, DC, representing the interests of real estate investors, has turned up the heat on lawmakers to pass an extention.

The Roundtable said its expiration would hurt the economy, potentially costing an estimated $6.8 billion in foreign investment based on the pipeline of 13,663 pending EB-5 petitions reported by U.S. Citizenship and Immigration Services. In an Aug. 31 letter to Congressional leaders and Senate Judiciary Committee members, the Roundtable and its partners estimated the program has raised $5.2 billion over the eight-year period from 2005-2013 -- $1.6 billion in 2013 alone, with the potential to create 31,000 jobs.

"Smart government policies, backed by facts, data, and statistics, are needed now more than ever to ensure that the U.S. can compete in the global marketplace to attract foreign investment dollars, and help finance projects that put Americans to work," the Roundtable said.