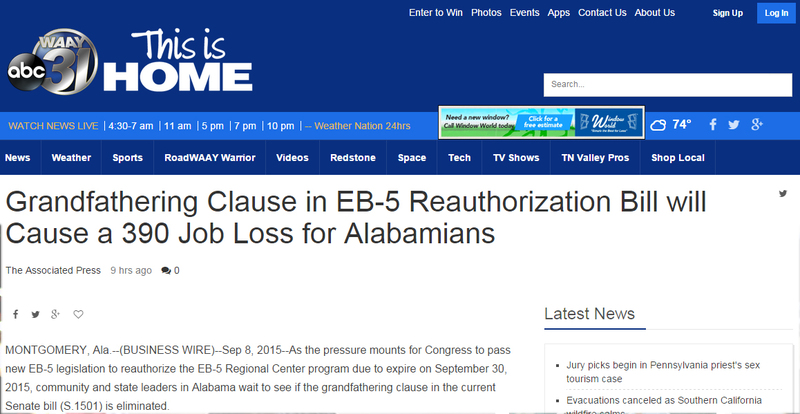 As the pressure mounts for Congress to pass new EB-5 legislation to reauthorize the EB-5 Regional Center program due to expire on September 30, 2015, community and state leaders in Alabama wait to see if the grandfathering clause in the current Senate bill (S.1501) is eliminated.

This bill S.1501, if unchanged, would allow the grandfathering-in of the 15,000 investors and their families in the EB-5 queue and use up the 3,000 investor yearly quota for the next 5 years. The grandfathering goes beyond the investor’s location, it also applies to certain projects. These projects would have the benefit of accepting new investors at the old $500,000 investment threshold, instead of the $800,000 new enforcement, at the disadvantage of new projects. There are many projects of this magnitude that would devour the EB-5 quota for years to come if uncapped grandfathering-in was allowed.

MAJA, the More American Jobs Alliance, has been in discussions with the key players of Bill S.1501 for the last several months with the grandfathering clause a main point of contention. For example, the all too common $500,000,000 urban EB-5 project that filed and received approval on its business plan in 2014 for marketing purposes, would be able to consume approximately 30% (or 3,000 visas) of the annual quota under the 1992 regulations (calculated by 1,000 investors multiplied by 3 eligible family members).

Country Place Senior Living, one of many potential EB-5 projects in the state, has twenty projects planned for Alabama with 7 already built at a cost of $3.25 million and currently employing 85 people. If legislation passes unchanged, the remaining projects will be shut down because it cannot compete with the grandfathered projects at the $500,000 threshold.

“With proposed legislation as it is currently written, the large EB-5 projects that have pending or approved business plans will be grandfathered-in to the existing regulations,” says Shae Armstrong, Director and Counsel for MAJA. “These projects would then consume at least the next 5 years of EB-5 quota and shut down the thirteen senior assisted living facility projects that are still currently planned for rural Alabama.”

If Bill S.1501 is passed through legislation with the grandfathering clause intact, Alabama will lose the projects Country Place Senior Living has planned and will result in the following:

“The EB-5 program has matured beyond expectations and is at maximum capacity,” explains Armstrong. “It now makes economic sense to return EB-5 back to its original intent by requiring each immigrant investment to result in the hiring of actual real American workers and maximize U.S. job creation. There are more than enough direct job projects across America to fill up the EB-5 quota, accept foreign investment and create 10 real U.S. jobs per EB-5 investor.”