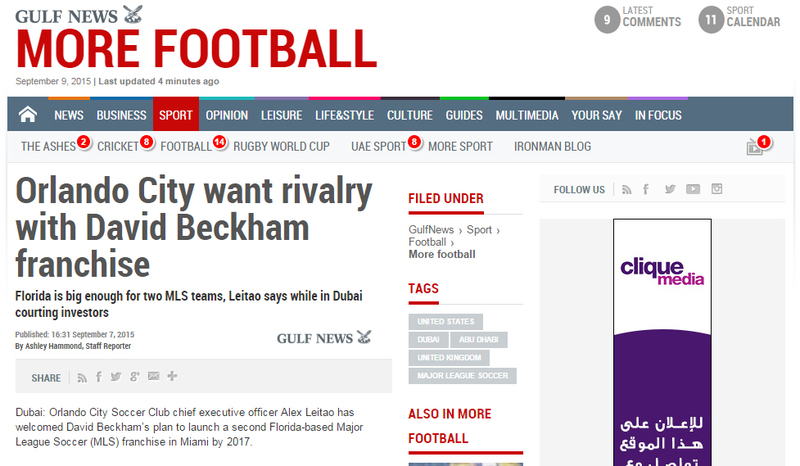 The former England and Manchester United midfielder was offered a discounted fee on an MLS franchise as part of his contract when he signed for LA Galaxy in 2007.

The legendary No. 7 has since identified Miami as the best place to start a new club, despite its proximity — three-and-a-half hours by car — to Orlando City, who joined the MLS this year. The Lions boast Brazilian 2007 World Player of the Year-winning midfielder Kaka among their ranks and average attendances of 30,000.

Leitao was in Dubai on Sunday as part of the Florida Dubai Link Exhibition at The Address Downtown — an event that looks to grow business networks between the two regions after Emirates airline launched a daily non-stop passenger service to Orlando on September 1.

Asked if Miami were a threat to the Orlando franchise, Leitao replied: “No, we would love to have them, this is just the rivalry we are looking for. Rivalry is important for our sport.”

And as to whether the Floridian peninsula was big enough for both clubs, he replied: “Yes, it is, we wish Beckham would put together his plan and build his team soon so that we can play each other very quickly.

“Beckham had the chance to pick a market and he definitely did his homework,” said Leitao in reference to a large football-loving Hispanic community in Florida. “In Miami he has found a good market to start a team and we hope they come to play us very shortly so that we can create a rivalry and beat them. That is what we are looking for.”

Leitao had earlier given a speech to Dubai investors on the history of the club, while Gonzalo Lopez Jordan, managing partner of the American Regional Centre Group, discussed business opportunities arising from Orlando City’s planned 25,500 capacity stadium, which will be completed by 2017. At present the club play at the 62,000 capacity Citrus Bowl.

The club is seeking to raise $49.5 million (Dh182 million) from 99 investors, 73 of whom have already registered  interest in making a $500,000 investment in exchange for a green card for themselves and family members under the 1990 EB5 residency programme.

Jordan described it as “a great investment opportunity” for shareholders, with the business expected to be worth one billion dollars by 2020.

As well as individual investors buying a share in Orlando’s new stadium, he said stadium naming rights were also up for grabs and jumped at the suggestion that Emirates might move into the MLS market.

“That would be amazing if Emirates were looking to do that, especially as they already have a minor league soccer team in the US. Moving into the MLS would make sense, especially considering the new flight path and regional investment as well, but so far there has been no conversation,” he added.