Millionaire investors flock to the US on visas 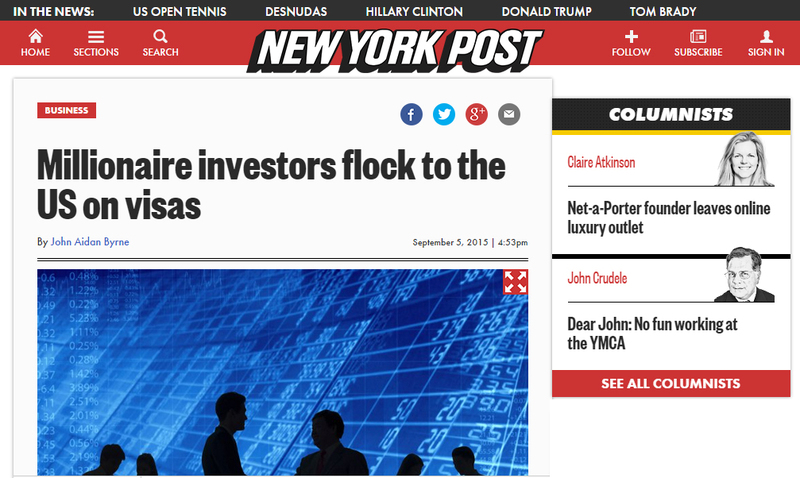 A record wave of Chinese millionaires are flocking to the US in hopes creating their own American Dream.

The deep-pocketed entrepreneurs are buying their way into the US — for themselves and their families — and in turn escaping the hard economic environment at home by investing in US “anchor” businesses and promising to create 10 US jobs.

In return, the wealthy Chinese get an EB-5 visa, which allows them and their familes to move to the US.

“There is more demand for the green-card application process and more capital flows out of China to the US in this current environment,” John O’Shea, chairman and chief executive of Global Alliance Securities, a New York-based broker dealer specializing in matching investors from China with local companies seeking capital under the US government’s EB-5 program.

The popular program grants US visas to foreigners and their families who invest at least the current minimum $500,000, and create 10 US jobs.

US Census data rank China (population 1.3 billion-plus) as the No. 1 source of foreign influx after India, counting 147,000 China natives going to the US in 2013.

The EB-5 visa program alone is dominated by China.

“I would expect to see the upward trend continue,” O’Shea said.

O’Shea’s firm is at the epicenter of a recent surge in a flight of capital, people and overseas investors, mostly from China. Their goal is a return on and a safe haven for their capital, as well as a comfortable US lifestyle for their families.

And O’Shea’s firm is active in similar programs for casual fast-food dining franchisees. “We are comfortable that the necessary job creation will be there, and the proper documentation is readily available,” O’Shea told The Post.

Emigration from China to New York is accelerating among wealthy families and the business elite invest in US firms.

The Big Apple in particular is being fortified by their billions in capital seeking a safe haven from an economic slowdown and a potential political crackdown back home, according to China experts and official data.

Aside from its well-known investment in US securities and debt that one estimate puts as high as nearly $2 trillion today, Chinese companies have made more direct investments: some $46 billion in the US on business and trophy properties since 2000.

This year, a Chinese company acquired the fabled Waldorf Astoria for $2 billion.

Even more wealthy Chinese will probably be seeking a safe haven here in the wake of the past few weeks. They watched nervously as shares in the Shanghai bourse fell 15 percent in the last month — much steeper than the 8.3 percent decline in the Dow Jones industrial average.

China last year posted growth of 7.4 percent, a blistering pace by American standards. But it was China’s slowest since 1990, as business contracted.