It’s time for the corporate visa giveaway to go away 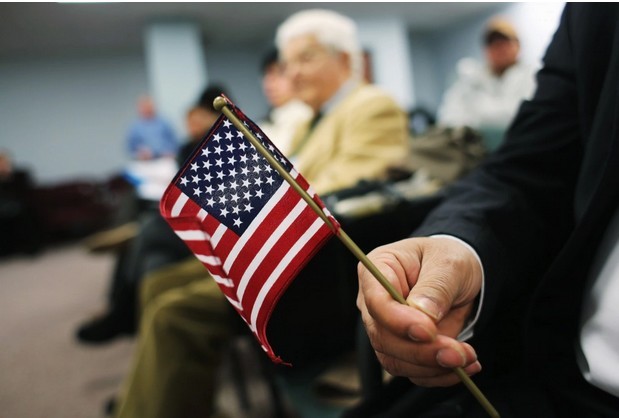 An immigrant holds a flag while waiting for a naturalization ceremony to become a U.S. citizen.

TWENTY-FIVE years ago, the federal government launched the so-called EB-5 visa program under which foreigners who pump a minimum of $500,000 into a U.S. business, creating at least 10 jobs directly or indirectly, qualify for permanent resident status. The theory was that offering a place in the United States would encourage investment and boost the economy. In practice, the program has flopped. The right way to mark its anniversary is for Congress to let it expire when its authorization runs out Sept. 30.

EB-5 has shown paltry results — to the extent the results can be measured at all, given the basic imprecise nature of measuring job “creation.” Last year, a Brookings Institution report estimated that 8,500 foreign investors had received visas since the program’s inception, along with about twice that number of family members. In return, the U.S. economy got 85,500 full-time jobs and approximately $5 billion in investment. This sounds impressive — until you consider that the U.S. labor force includes more than 150 million people and that the United States gets more than $200 billion in foreign investment annually.

To be sure, “regional centers,” designated by government to promote business ideas to wealthy would-be visa holders, have employed a small army of consultants, lawyers and lobbyists — but they are still plagued by bureaucratic complexity and, all too often, fraud. In 2013, the Securities and Exchange Commission sued a Chicago-area businessowner who attempted to bilk more than 250 people out of more than $150 million. A disproportionate number of EB-5 “investors” made their millions in China’s opaque economy, making the origins of their wealth difficult to ascertain. The EB-5 program is supposed to favor distressed economic areas, but the definition of a needy zone has been stretched to include nearly the whole country, including hot downtown real estate markets.

Senate Judiciary Committee Chairman Charles E. Grassley (R-Iowa) and ranking member Patrick J. Leahy (D-Vt.) are pushing a reauthorization bill that would significantly reform the EB-5 program by strictly defining eligible geographic areas, raising the minimum investment and strengthening executive branch oversight of the regional centers. Yet even if it were reformed and everyone obeyed the law, EB-5 would still be a bad idea. It’s corporate welfare, enabling certain businesses to attract capital more cheaply than others based on a government-conferred sweetener — namely, a visa. Perhaps inevitably, the EB-5 has channeled funding to areas such as hotel ventures that suit the needs of EB-5 seekers and their myriad highly paid consultants — but not necessarily those of local communities.

Notice we haven’t said EB-5 is wrong because it’s immoral for the U.S. government to sell visas. That’s because, in effect, the government is giving away its visas to private businesses, who then market them for their own benefit. All taxpayers get are the highly attenuated benefits of economic development — with no guarantee, or even any likelihood, that the visas couldn’t have been put to more productive use by someone else. Let hotel developers compete for capital in the marketplace like everyone else. And let the thousands of visas set aside for EB-5 applicants be reassigned to immigrants who are worthy even if they aren’t rich.