The Quiet Little Struggle Over Extending the EB-5 Program 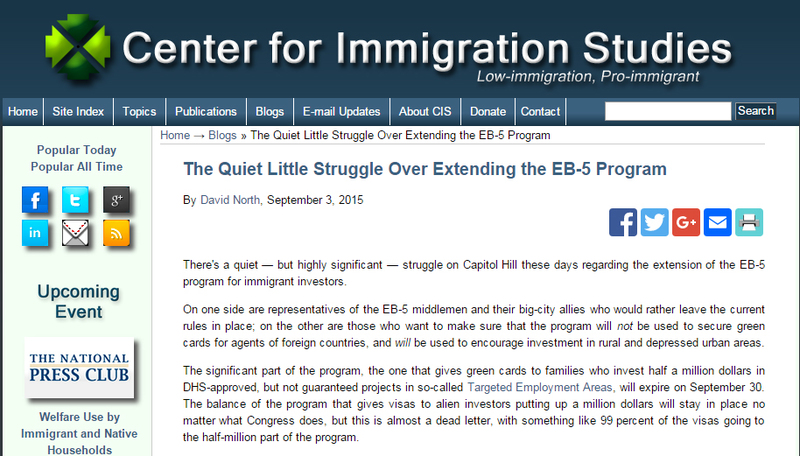 There's a quiet — but highly significant — struggle on Capitol Hill these days regarding the extension of the EB-5 program for immigrant investors.

On one side are representatives of the EB-5 middlemen and their big-city allies who would rather leave the current rules in place; on the other are those who want to make sure that the program will not be used to secure green cards for agents of foreign countries, and will be used to encourage investment in rural and depressed urban areas.

The significant part of the program, the one that gives green cards to families who invest half a million dollars in DHS-approved, but not guaranteed projects in so-called Targeted Employment Areas, will expire on September 30. The balance of the program that gives visas to alien investors putting up a million dollars will stay in place no matter what Congress does, but this is almost a dead letter, with something like 99 percent of the visas going to the half-million part of the program.

The developers want an extension of EB-5 with few, if any, changes; the reformers are willing to see the central part of the program die (which would be OK with me) if the current shabby program is not fixed.

There are three essential issues:

On the first point, there are those who worry about the ease with which operatives for foreign governments can secure green cards through this program. For example, Sen. Chuck Grassley (R-Iowa), chair of the Senate Judiciary Committee, stressed this problem in a statement about an internal DHS memo:

Grassley was especially concerned about a section of the memo that outlines how the EB-5 program "may be abused by Iranian operatives to infiltrate the United States." According to the memo, HSI became concerned about the program while investigating operatives who allegedly "facilitate terrorism and are involved in an illicit procurement network that exports items to Iran."

HSI stands for Homeland Security Investigations; there have been more reports on the use of the program by China than Iran, as something like 85 percent of the EB-5 visas go to Chinese nationals. There was one account of an alien from China buying into an EB-5 project in California that was building an office for the FBI.

The inability and unwillingness of DHS to deal with these national security problems was the subject of a recent report from the Government Accountability Office, "Immigrant Investor Program: Additional Actions Needed to Better Assess Fraud Risks and Report Economic Benefits".

On the second point, though DHS does not issue statistics on this, one gets the strong impression that most of the investments go to developments in big cities, such as a building on Wall Street, the massive Atlantic Yards development across the river in Brooklyn, and hotels in downtown Los Angeles.

This can be done because the rules on where such investments may take place are weak and poorly enforced. As I have pointed out previously, you could put an approved EB-5 investment right across the street from the White House with a little gerrymandering of a "targeted employment area" (TEA). If one can draw lines that include that mansion in a depressed area, one can place an EB-5 project in just about any part of the United States. A TEA is a developer-created area where the project will be located, and sometimes occupies as many as a dozen census tracts, arranged as the developer wants them arranged.

Reformers want to nudge the EB-5 program to return to its original focus on rural and depressed urban areas.

Third: Should the EB-5 program, as currently constituted, exist at all? It involves the sale of visas to rich foreigners and, as some economists have pointed out, it largely involves the transfer of funds from some rich aliens to some American middlemen. In the words of the trade it has "reduced the cost of mezzanine financing" for some big-city projects. Since ours is a huge and expanding economy, the extent to which the United States as a whole is helped by EB-5 is minuscule.

As Fortune magazine — rarely accused of leftish sympathies — wrote in an article entitled "The dark, disturbing world of the visa-for-sale program", EB-5 is "an easy way to score funding for ventures that a bank would never touch."

There is concern among reformers that some form of the EB-5 extension will be included by the House of Representatives as it passes a continuing resolution to keep the government funded for the next few months. Such an extension would not include any reform of the program.