On Capitol Hill, It’s Business as Usual for Investor Visas 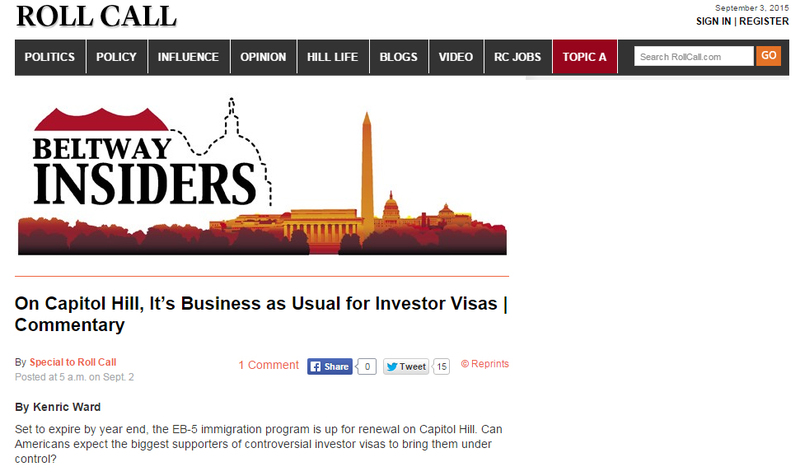 Set to expire by year end, the EB-5 immigration program is up for renewal on Capitol Hill. Can Americans expect the biggest supporters of controversial investor visas to bring them under control?

There are ample reasons to scrap the pay-for-play system that has been exposed by numerous government investigations. Threats to national security and tawdry examples of political influence are well documented. Most recently, the Government Accountability Office reported immigration authorities even failed to interview foreign nationals or identify funding sources.

But don’t look for Congress to take these findings seriously. After all, lawmakers from both parties routinely grease the way for foreign investors and private EB-5 regional centers that collect billions of dollars in blocks of $500,000 to $1 million.

Ostensibly, the EB-5 program uses foreign capital to create U.S. jobs. In fact, no one knows how many jobs. No one knows exactly where the money comes from, or where it winds up.

Such niggling details don’t matter to lawmakers. They glibly call EB-5 a job-creating tool. That’s their story, and they’re sticking to it.

The reauthorization bill – S 1501 – is sponsored by Sen. Patrick J. Leahy. The Vermont Democrat happens to represent a state that is home to the largest government-sponsored EB-5 regional center in the nation. Can the senator from Jay Peak be an honest broker?

In fairness, Leahy’s bill contains provisions aimed at tightening a very loose program. Requiring that the U.S. Citizenship and Immigration Services actually verify the funding sources of foreign nationals who otherwise are barred from legally residing here would be an improvement.

Yet the measure bill sends profoundly mixed signals. It codifies former USCIS Director Alejandro Mayorkas’ memos on “ethical conduct and transparency.” That’s the same Alejandro Mayorkas who worked his adjudicators to “get to yes” on previously denied EB-5 applications.

Canada ended its version of EB-5, acknowledging that a visas-for-cash program was ill-conceived and ultimately unenforceable. The American model that uses hundreds of freewheeling middlemen as “job creators” is even more ripe for cronyism and outright fraud.

Despite that — and because of it — meaningful reforms and broader transparency will prove too much for a captive Congress. Regional center operatives have their friendly lawmakers on speed dial; they will continue to call in favors.

So the smart money is on Congress doing what it does best: Kick the can down the road by extending the existing program for, say, 180 days. That will buy more time to collect additional campaign contributions and craft “reforms” more amenable to the EB-5 crowd.