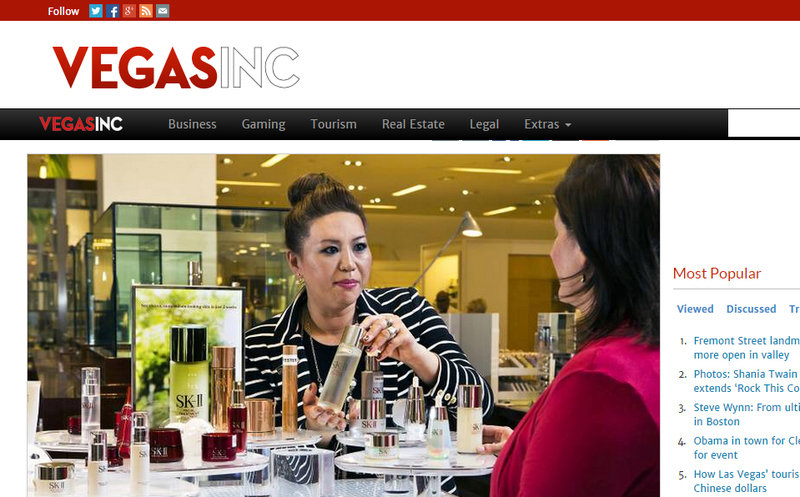 As senior marketing manager for two of the top shopping destinations on the Strip — Fashion Show mall and the Grand Canal Shoppes, both owned by General Growth Properties — Janet LaFevre strives to stay a step ahead of the pack when it comes to recognizing trends in Las Vegas’ visitor demographics.

On the international front, LaFevre takes her cues from China.

“Las Vegas is an evolving city, and we need to ensure we continue to meet the growing demands of our international customers — specifically the Chinese,” LaFevre said.

According to the Department of Commerce’s International Trade Administration, nearly 2.2 million Chinese visited the United States in 2014, an increase of 451 percent from 2007, as the Chinese inch toward becoming one of America’s leading overseas visitor segments.

Southern Nevada is poised to capture an increasing piece of that pie, as retail centers, entertainment venues, restaurants and casinos tailor their tourism strategies to meet the needs of the Chinese, 300,000 of whom visited Las Vegas in 2014, according to Rafael Villanueva, senior director of international marketing for the Las Vegas Convention and Visitors Authority. It was only as recently as 2008 that the sample size was large enough to track reasonably, Villanueva said.

Villanueva says Chinese travelers to the United States tend to spend more than other international travelers — on average, Chinese tourists spend $3,200 per person per trip, according to 2013 figures — and stay longer. In a survey to determine how Chinese travelers spend their vacation days in America, 89 percent cited shopping as a must-do, while 51 percent said fine dining and 13 percent planned to visit a casino, according to the International Trade Administration.

“Las Vegas is a very service-driven destination, and we must understand who our guests are,” said Villanueva, adding that the LVCVA opened an outlet in Shanghai in 2008 to serve as the organization’s eyes and ears in China. “On the casino side, we’ve been very good at (addressing the needs of the Chinese), but in other hotel operations, we are still learning. As far as shopping centers go, Fashion Show and the Grand Canal Shoppes more than any other properties have taken a very aggressive approach in reaching Chinese tourists.”

LaFevre said those efforts included advertising in luxury publications in China; participating in digital guidebooks and promotions; managing a partnership with China UnionPay, a credit/debit card company; partnering with China’s largest online travel agency, Ctrip, and its new Shopping Chic program; and securing the services of marketing representatives in China through East-West Marketing.

In April, the Active America China trade show hosted more than 200 travel industry guests and 80 travel agents from China. The show was co-sponsored by the LVCVA and the Grand Canal Shoppes, and an opening reception was at Fashion Show.

“The Chinese market has been on our radar for years and is critical to the different pieces to our business,” LaFevre said.

Meizhou Dongpo, an upscale Sichuan restaurant with numerous locations in China, is scheduled to open a 30,000-square-foot flagship location in spring 2016 at the Grand Canal Shoppes. Chinese visitors looking for a taste of home also can choose from other high-end restaurants on the Strip, including Blossom at Aria, Jasmine at Bellagio, Fin at Mirage, Hakkasan at MGM Grand, and Wing Lei at Wynn Las Vegas.

As for nightlife, “with hundreds of thousands of visitors coming to Las Vegas from Asia every year, this is obviously an important group of guests to consider when booking entertainment at our venues,” said Jason Gastwirth, senior vice president of marketing and entertainment at Caesars Entertainment. “This can be reflected in both our resident headliners who are also international icons, such as Celine Dion and Britney Spears, as well as more specific offerings like ‘Jubilee!’ at Bally’s Las Vegas, Show Lo and Kim Bum Soo at the Colosseum at Caesars Palace or ‘Paris By Night’ and Na Ying inside the Axis at Planet Hollywood.”

Most resorts gear up annually for the Chinese New Year, and Chinatown lies just west of the Strip on Spring Mountain Road.

But since the Imperial Palace was transformed into the Linq hotel, there has been a void in Asian-themed properties.

That niche soon will be filled by a pair of resorts being backed in part by Chinese investors. Chinese bankrolling in Las Vegas has become more common, due largely to the EB-5 government visa program that rewards foreign investors with green cards, providing legal residency status for people who make an investment of $500,000 or more in Las Vegas, which is categorized as economically depressed. (The minimum investment in many other areas of the nation is $1 million.)

The larger of the projects, Resorts World Las Vegas, is among the most massive and pricey here in a decade and will be a crucial step in revitalizing the north end of the Strip.

Developed by Genting Group on the site of the former Stardust, the $4 billion, Chinese-themed resort is expected to include 3,500 rooms, multiple towers and 100,000 square feet of gaming space. Genting broke ground in May and is scheduled to open the resort in mid-2018.

“Resorts World Las Vegas’ unique Chinese theme, as well as the multitude of accommodation, dining and retail offerings, will cater to visitors from all over the country and the world, including China,” said Michael Levoff, senior vice president of public affairs at Genting. “The number of outbound tourists from China … appears to only be growing. Genting has a loyal customer base from China, the United Kingdom and countless other countries who visit our Resorts World properties around the world. Thanks to these existing relationships, in combination with an innovative product and Las Vegas’ global reputation for world-renowned entertainment, we will grow the overall market and increase the number of visitors to Nevada.”

The other project, the Lucky Dragon, will be a 10-story boutique hotel with about 200 rooms on Sahara Avenue west of the Strip. The resort, designed to create an authentic Far East cultural and gaming experience, is being developed by Andrew Fonfa, who owns the adjacent Allure condominiums. Concrete pouring for the foundation began in May; the project is tentatively scheduled to be completed next year.

Three major local companies — Las Vegas Sands, Wynn Resorts and MGM Resorts International — operate casinos in Macau and are being affected by the slump, which has been attributed to a government crackdown on corruption among officials. The crackdown has scared off high rollers.