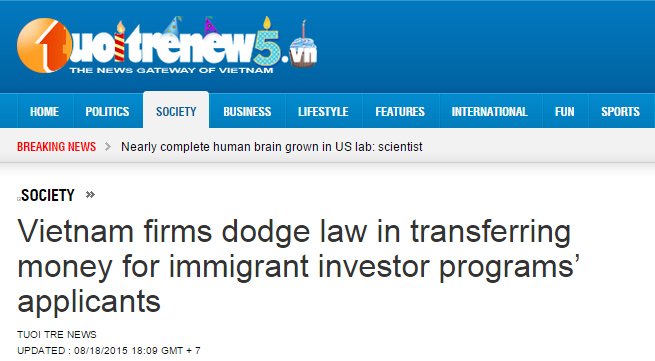 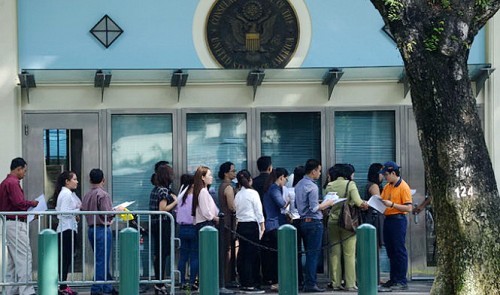 Many Vietnamese firms said they can dodge the law to transmit money abroad for their clients who are applicants for immigrant investor programs offered by the U.S. and other countries.

Such money transmissions are necessary for applicants to prove their financial capability as required by such programs as the U.S.’s EB-5 Immigrant Investor Program and two other programs of Canada.

Under the EB-5 program, there are two minimum qualifying investment rates: US$1 million as the general rate, while $500,000 is applied to investors in a high-unemployment or rural area in the U.S.

Meanwhile, applicants for the Canadian Immigrant Investor Program must have a minimum of CA$1.6 million, while those for Canada’s Immigrant Entrepreneur Program must demonstrate a legally acquired personal net worth of at least CA$300,000.

In order to transfer money in foreign currencies from Vietnam to other countries as overseas investment, the transferor must obtain an overseas investment license granted by the Vietnamese Ministry of Planning and Investment (MPI), said Nguyen Hoang Minh, deputy director of the Ho Chi Minh City Branch of the State Bank of Vietnam (SBV).

In talking with Tuoi Tre (Youth) newspaper, a lawyer who is the supervisor of an EB-5 program project in the U.S. said she has handled dossiers of six Vietnamese applicants since 2014 based on their overseas investment certificates issued by the MPI.

Using such certificates is the best and only official way for the program’s applicants to transfer their money in foreign currencies abroad, as it is legal and helps conserve their investment capital, she said.

However, as far as Tuoi Tre knows, it is not easy to obtain an overseas investment license from the MPI, as the applicants must carry out numerous tough procedures that may take as many as six months to be completed.

Therefore, most applicants for the above immigration programs opt to use services of firms that can go around the law in such transfers.

Many service providers said that they can help their clients transfer money in foreign currencies abroad without using overseas investment certificates.

For those who are applying for the said Canadian programs, their service providers will ask them to sign a contract with a Vietnam-based international bank that has a branch in Canada, Thang, a man who has worked for two companies offering such services, told Tuoi Tre.

This international bank can then transfer the applicants’ money to its bank in Canada and charge them a high fee, Thang said.

Meanwhile, applicants for the EB-5 program will be asked to make money transfers to the U.S. through Chinese or Singaporean banks based in Vietnam.

These lenders will first transmit money from Vietnam to China or Singapore, where the money will then be passed on to the U.S., Thang explained.

An employee at a consulting firm in this field said their company can help clients open an international bank account in a third country, such as Singapore.

This staffer said after having such an account, its holder can transfer money from Vietnam to any international bank.

People without such an account can use money transfer services from other firms, but they have to pay a high fee that is equal to 4.5-5 percent of the amount to be transferred.

Regarding overseas money transfers, an employee at the Vietnam representative office of Canada-based Harvey Law Group (HLG) said the company’s clients will transfer a required amount as investment to an account in Vietnam.

The amount will then be transmitted to another account of the firm at a bank in Hong Kong, where it will be deposited in a third account that is used for the investor immigrant program to which the money owner is an applicant, the employee said.

All previous clients of HLG have gone abroad this way, and the relevant immigration agencies have approved them, the staffer said.

The total cost for the transfer is $550,000, including the service charge, the employee said.

Another firm said another way for such money transfers to take place involves financial companies in the U.S. and Vietnam that have a holding-subsidiary relationship.

In this way, the applicant for the EB-5 program will deposit amounts in an account of a company in Vietnam, and when the total balance reaches $500,000, another  company in the U.S. (with a holding-subsidiary relationship with the Vietnamese company) will turn that sum into an investment intended for the U.S. government.

People using this service will have to pay a high fee, but in return, their investment will be kept safe, a lawyer providing consultancy for the EB-5 program told Tuoi Tre, adding that this does not violate the relevant laws, but only dodges them.