What Donald Trump Does Right 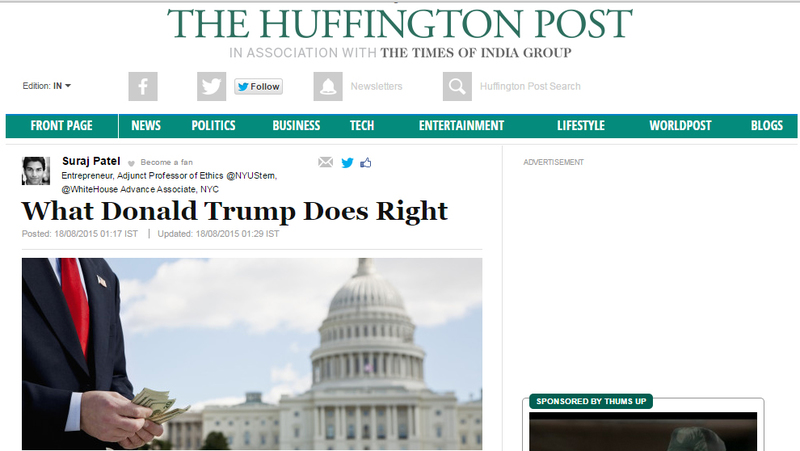 If Mr. Trump is to have any chance to build support beyond his xenophobic base, he should embrace his born again moment as a reformed big money donor.

There has long been a palpable sense of frustration with politics in the country that cuts across every traditional partisan, ideological, and geographic measure. If you're not an elite in either party, you instinctively know that money corrupts, that handing elections over to the biggest donors, often shrouded in secrecy has left us saddled with a set of professional politicians who are focused on winning an ever slightly bigger piece of the pie for their campaign contributors rather than thinking about making the pie bigger for all of us.

During the first weekend of August, Charles and David Koch held an ultra-secretive donors summit pledging to spend $900 million on the 2016 presidential campaign. Present were the top tier candidates for the GOP nomination and then some, including Scott Walker, Jeb Bush, Ted Cruz, Marco Rubio, Carly Fiorina, hat in hand, to help buy the presidency.

On the other side of the country, Donald Trump began to find his most potent political message:

"I've often been amazed that a U.S. senator will get on an airplane and come to New York and sit with me to get a check. Most of their life is fund-raising," Trump said.

And that's what makes Donald Trump such a potent figure in American politics right now. Many attribute his rise to his racist, bombastic statements, which catapulted him to the top of the Republican base's preferences -- but many Republican candidates have made statements as bad, if not worse, related to immigrants (see Ted Cruz), women's reproductive rights (see Marco Rubio), or LGBT individuals (see Mike Huckabee) -- there has to be something else to his appeal.

No, Donald Trump's secret weapon is the history of political contributions he's made in order to become a plutocrat in America. He's built golf courses with expedite environmental approvals, his son-in-law used accelerated EB-5 certification to raise investment money abroad in exchange for visas, he's gotten rights of way and easements where most of us would spend years simply to get a hearing. And he's done it with his contributions.

During the first GOP debate in response to a debate question about his past donations to politicians in both parties, Trump responded,

"When you give, they do whatever the hell you want them to do... If I ask them, if I need them, you know, most of the people on this stage I've given to, just so you understand, a lot of money.

What better messenger on what ails our political system than someone who helped participate in breaking it for years? He continued,

"And you know what? When I need something from them, two years later, three years later, I call them, and they are there for me. And that's a broken system."

The pernicious influence of big money in politics has left us with a political system that's become completely disconnected from the welfare of the actual people it governs.

I do not have much faith in Donald Trump to stay disciplined and I certainly share nearly none of his views on any other issues, but if it takes a billionaire with a checkered ethical past to awaken grassroots Republicans to what the rest of us already feel, then I'm a supporter of that one cause.