Services for immigration programs for investors booming in Vietnam 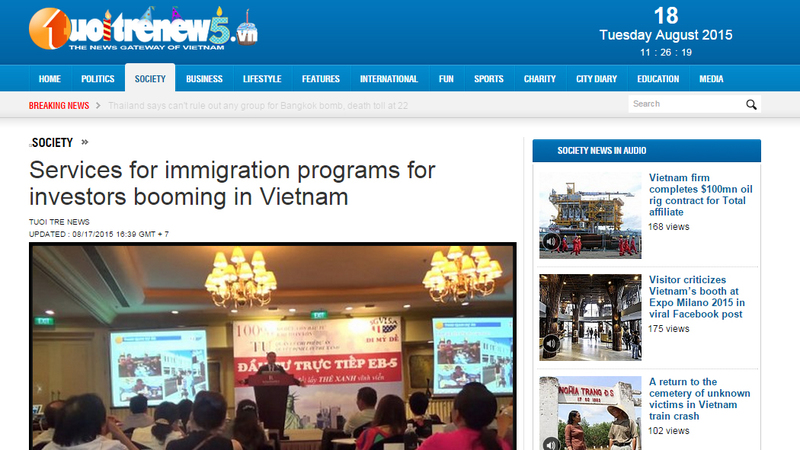 A seminar on the U.S.’s EB-5 Immigrant Investor Program recently held in Vietnam.

Services offered by Vietnamese firms to local people who want to join the immigration programs run by the U.S. and some other countries for foreign investors have been mushrooming recently.

Under the EB-5 Immigrant Investor Program, as shown on the website of the U.S. Citizenship and Immigration Services, entrepreneurs (and their spouses and unmarried children under 21) are eligible to apply for a green card (permanent residence) if they make the necessary investment in a commercial enterprise in the United States; and plan to create or preserve 10 permanent full-time jobs for qualified U.S. workers.`

Under the program, there are two minimum qualifying investment rates: $1 million as the general rate while $500,000 is applied for investors in a high-unemployment area or rural area in the United States.

Meanwhile, applicants for the Canadian Immigrant Investor Program must have a minimum of CA$1.6 million in net worth, alone or with a spouse or partner, while those for Canada's Immigrant Entrepreneur Program must demonstrate a legally acquired personal net worth of at least CA$300,000.

In addition, applicants for the Canadian Immigrant Investor Program must sign an investment agreement consenting to invest CA$800,000 with an approved financial intermediary.

Meanwhile, candidates for Canada's Immigrant Entrepreneur Program must commit to invest a minimum of CA$100,000 in establishing, purchasing or expanding a business or entering into a successful partnership, in which they will retain at least 25 percent ownership interest, according to the website of the Canadian Citizenship & Immigration Resource Center.

At a seminar on investment and immigration to the U.S., Canada, Europe and the Caribbean held on August 7 by the representative office of Canada-based Harvey Law Group (HLG), Ta Thi Phuong Thao, an HLG employee said in addition to an investment of $500,000 in the U.S., applicants for the EB-5 program must pay $50,000 as a project management fee and $40,000 as an attorney fee.

“In our experience, an applicant for the EB-5 program will have to spend a total of $610,000. This is an average rate, which is subject to the number of family members of each applicant,” Thao said.

When Tuoi Tre (Youth) newspaper correspondents said the cost was too high, Thao affirmed that the probability of success would be 100 percent as clients use services provided by HLG when it comes to the EB-5 program.

She added that her company will return the collected fee to clients if they fail to get a green card.

Employees at the NVS International Investment Consultant Company, located on Ky Con Street in District 1, Ho Chi Minh City, said, “The purpose of investing money in the U.S. is to get green cards for the whole family if children of the applicant are under 18 years old.” 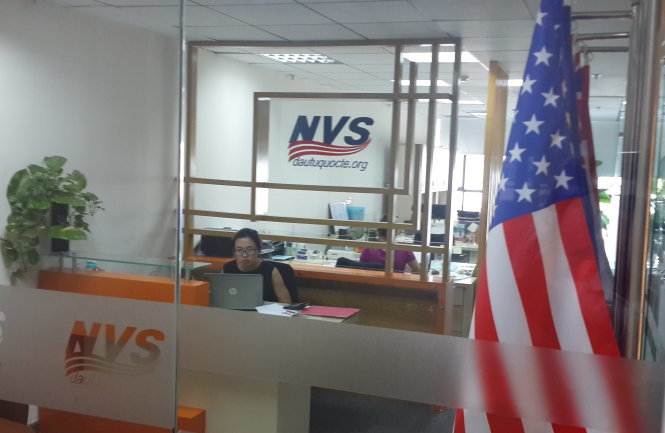 Talking with Tuoi Tre about the fact that some Vietnamese firms demand $25,000-40,000 per EB-5 application from their clients, Tiffany Murphy, the consular chief at the U.S. Embassy in Hanoi, said the U.S. government only collects a fee of $1,500 for file consideration.

The first step of the EB-5 visa process is that foreign entrepreneurs submit their applications for immigration (I-526), and the U.S. Citizenship and Immigration Services collect a fee of $1,500 for handling an I-526 file, Murphy said.

This is the only charge that is demanded by the U.S. government in the process, she added.

However, applicants will have to pay expenses on medical check-ups, translation and others, which vary from country to country, the official said, adding that she thinks such expenditures are not very costly.

A man named Thang, who has worked for two companies offering such services, told Tuoi Tre that most such firms are registered in the name of a Vietnamese and they do only one thing: receiving dossiers from clients and then transferring them to their foreign partners to get a commission.

Such firms make no commitment on the result of their services, so if their application is turned down, their clients cannot recover any money they have paid, Thang said.

The case of Le Tan Thi Viet Thanh, a 45-year-old woman in Ho Chi Minh City, is an example.

She transferred a total of $39,000 and CA$8,400 to the International Immigration Group (IMG), a Vietnamese firm in Hanoi, after signing with the company a service contract so that she could settle down in Canada as an investor.

In August 2008, Thanh was required to transfer CA$135,000 to the Canadian government but she failed to do so, as banks in Vietnam do not allow foreign currencies to be transferred abroad.

Thanh asked the IMG to transfer that amount for her, but the company did not do it.

As a result, in September 2008, Thanh received a notice from the company that the Canadian government had rejected her application.

As the IMG did not refund Thanh the money she had paid to the company, the woman sued it at the Hanoi People’s Court, which concluded that the firm was at fault.

The court said that the IMG had not supplied consultancy to Thanh about the transfer of money to Canada, so the woman could not do it.

But the IMG has still not executed the verdict by far although Thanh had repeatedly asked the company to do so.

“There is no money in the IMG’s bank account. The company is a service provider, so it has no assets to ensure the execution of the verdict,” the Verdict Enforcement Sub-Department of Hanoi’s Hoan Kiem District said when it returned to Thanh her petition for the verdict to be implemented.