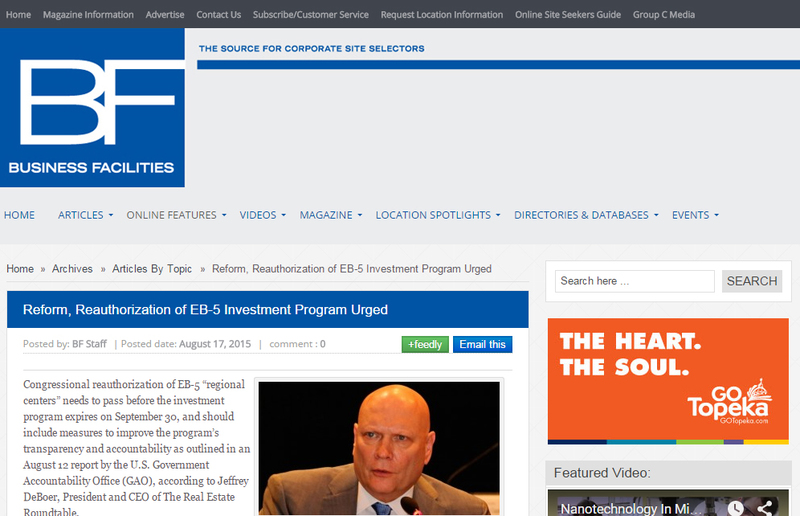 Congressional reauthorization of EB-5 “regional centers” needs to pass before the investment program expires on September 30, and should include measures to improve the program’s transparency and accountability as outlined in an August 12 report by the U.S. Government Accountability Office (GAO), according to Jeffrey DeBoer, President and CEO of The Real Estate Roundtable.

According to DeBoer, the EB-5 program “provides unique gap financing for large and small projects across the nation and creates American jobs at no cost to taxpayers.”

The GAO report “focuses on measures to safeguard national security, deter evolving risks of investor fraud, and clarify accepted government methodologies to show job creation. Its findings are commendable and pending bipartisan bills presently address these identified concerns. This report can now be the catalyst that points the way toward reform and multi-year reauthorization by Congress.”

The consequences of not reauthorizing EB-5 regional centers include:

“Smart government policies are critical to enable America to compete in the global marketplace to attract foreign investment dollars – and put Americans to work – in rebuilding infrastructure, modernizing buildings, and developing resilient 21st century communities where we live, work, and play,” said DeBoer. “Businesses, local economic development agencies, and other key stakeholders should not wait. They should now urge their Senators and Representatives to act swiftly to reauthorize EB-5 after Labor Day, with the findings of the GAO report as a guide for reform.”