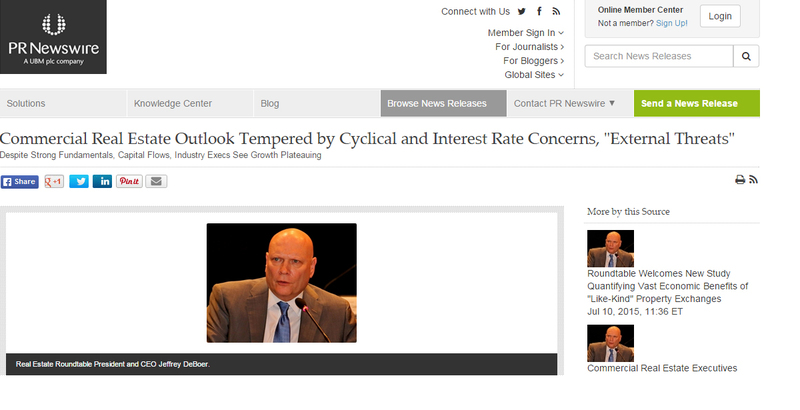 Commercial real estate market fundamentals remain strong — amid continued, gradual improvement in the broader U.S. economy — yet participants in The Real Estate Roundtable's latest quarterly "Sentiment Survey" remain uneasy about a multitude of overseas threats, expected monetary policy tightening, and typical cyclical issues. Reflecting this sense of uncertainty — which has persisted through six-plus years of economic recovery — and a slight softening in expectations for future growth, the survey's "Future Conditions Index" has fallen 11 points since this time last year (from 67 in Q3-2014 to 56 in Q3-2015).

Most survey respondents said they expect stable asset valuations over the coming year, although there were anecdotal comments about capital costs going up, and the potential for a "moderation" or "correction" in real estate values — which would affect local government tax revenues, bank holdings of commercial real estate, and the portfolios of investors large and small.

"As The Roundtable's Q3 survey shows, commercial real estate conditions are quite good — driven by steadily improving job growth and demand across the economy, as well as strong capital flows and appropriate levels of construction and lending in key sectors," said Roundtable President and CEO Jeffrey D. DeBoer. "At the same time, there are concerns about global instability, rising interest rates, and the sense that growth opportunities may be getting harder to find at this stage in the cycle," he added. "When markets eventually begin to plateau, we hope national policies will be in place to spur more robust job creation and to maintain appropriate flows of investment capital into real estate markets."

Although survey respondents cite strong inflows of foreign equity capital — with some projecting more such capital from Asia — the amounts being invested in U.S. real estate vis-a-vis other sectors of the U.S. economy are still relatively small. To encourage more long-term investment in U.S. commercial real estate markets and job-creating infrastructure projects, The Roundtable supports pending legislation to reform the Foreign Investment in Real Property Tax Act of 1980 (FIRPTA).

Another common-sense policy step would be to reauthorize and reform the EB-5 investment "regional center" program before its scheduled expiration on Sept. 30 (along the lines of pending bills in the House and Senate). An in-depth economic study released in June found the EB-5 program to have a "disproportionately large" and positive impact on net U.S. job creation and domestic investment — generating a minimum of $5.2 billion in private investment between 2005 and 2013.  In 2013 alone, the program generated at least $1.6 billion in private investment and 31,000 jobs — more jobs than 11 different states have individually created in the last 12 months.

The Q3 survey data was gathered in July by Chicago-based FPL Associates on The Roundtable's behalf.