A similar program in Vermont has generated $500 million worth of investment in ski areas and other projects.

The LePage administration is considering establishing a state-run program that would help Maine businesses lure foreign investors by giving those investors permanent U.S. residency. Maine would be the third state, after Vermont and Michigan, to create such a program, which allows foreign nationals to obtain a green card if they invest in projects that create jobs.

The investment program, called EB-5, was authorized by Congress in 1990 but never successfully implemented in Maine. It gives visas to individuals who invest $1 million, or $500,000 for investments in rural regions or those with high unemployment.

The administration’s interest in the program emerged last week after a group of Chinese investors announced plans to convert a dilapidated shoe factory in Auburn into a health and wellness hotel aligned with Central Maine Medical Center in Lewiston. The hotel would cater to affluent Chinese citizens who visit the area to obtain treatment at the hospital.

While the Chinese developers are confident they can attract funds without the program, they view it as a way to raise money and obtain work permits for some staff members who will be brought in because they speak Mandarin fluently, said Roland Miller, Auburn’s economic development director.

The Auburn project will raise Maine’s profile among wealthy investors in China and make it easier for other Maine companies to attract Chinese capital, Miller said. He said a state-run EB-5 program would boost those efforts.

“It would be helpful for any project that would come to the state of Maine,” he said.

THREE CENTERS, NO INVESTMENTS YET

Three private groups have already won federal designation to operate EB-5 regional centers in Maine, including USA Lifestyles, which is operated by Saddleback ski resort. But two are based out of state and none has secured any foreign investment.

In the absence of activity from Maine’s three private regional centers, the LePage administration is looking into creating a state-run EB-5 regional center, said George Gervais, commissioner of the Maine Department of Economic and Community Development.

“We are currently exploring options,” Gervais said in an email, declining to comment further. 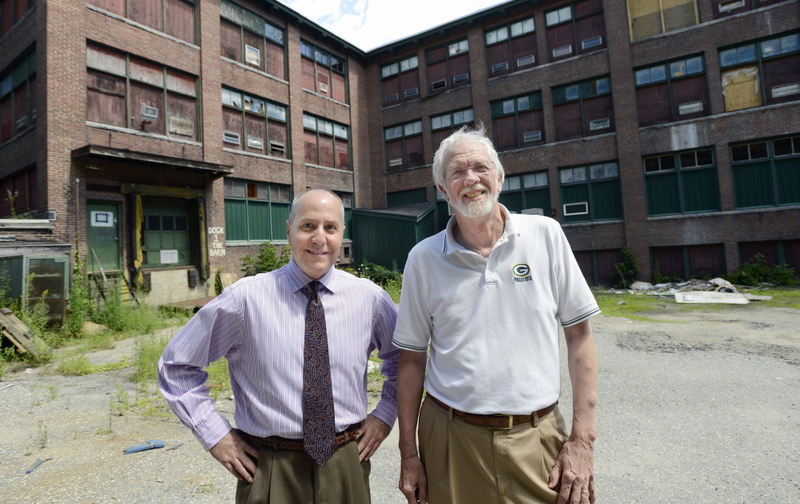 Alan Manoian, left, economic development specialist in Auburn, and Roland Miller, director of planning and development, on Thursday stand in front of the dilapidated shoe factory on Minot Avenue in Auburn that Chinese investors announced they plan to convert into a health and wellness hotel aligned with Central Maine Medical Center in Lewiston.

Vermont created its statewide regional center in 1997. The program has generated $500 million in investment, and another $500 million is committed for projects that will be built in coming years, said Patricia Moulton, who heads the Vermont Agency of Commerce and Community Development, which markets the program to foreign investors. The funded projects are expected to create 12,000 jobs, Moulton said.

“It’s a huge economic development opportunity for us,” she said.

Sugarbush Resort, which was struggling financially because of aging facilities and a decline in skier visits, raised $20 million from 40 foreign investors to build 15 high-end condominiums on the mountain slope. At the time the money was raised, the U.S. was in the midst of the Great Recession, and banks weren’t lending money for real estate projects, said Win Smith, the majority owner of the resort.

Smith said the resort would not have stayed in business without the project. The condominiums are now being sold, and investors are starting to see a return on their investments, he said.

“The bottom line for us is that it was a good program, and it came at the right time,” he said.

GOVERNMENT-RUN PROGRAMS A PLUS

Moulton, in Vermont, said that Asian investors, in particular, are attracted to her state because they put more trust in a government-run program.

On its website, the Vermont agency promises investors state oversight over projects to assure compliance with U.S. immigration law. Also, the agency’s day-to-day involvement in the state’s business community helps assure investors that projects are vetted for quality, the website says.

A separate Vermont agency, the Department of Financial Regulation, reviews projects to determine whether they comply with state and federal securities and immigration laws.

The two Vermont agencies have a total of about six staff people working on the program, which is funded primarily with tax dollars. Moulton said the state wants the program to eventually be funded by fees charged to the businesses that use it.

More than 650 investors have received conditional green cards, and more than 280 have received permanent green cards through the Vermont program. Many of the applicants view the program as a way to obtain residency for their children so they can attend college in the U.S. and work here after graduation, Moulton said. Those who invest in Vermont have typically moved to other states, particularly Florida and states in the Southwest, he said.

“They want to find the good, warm life,” she said.

MAINE COULD TAKE OVER EXISTING CENTER

There are nearly 700 regional EB-5 centers in the United States. The only one based in Maine, USA Lifestyles, is owned by Saddleback and has jurisdiction over Franklin County and Livermore Falls.

In 2009, the Greater Franklin Development Corp. approved a $10,000 grant to help pay for legal costs incurred in creating the center, which was also intended to help the Otis Falls paper mill in Jay, but it closed that year.

Saddleback has not been able to use the program to attract investors and continues to struggle financially.

The program is notoriously difficult and expensive to use. Developers must market their projects to overseas investors and hire attorneys who are experts in corporate law, securities law and immigration law, said Sarah Robison, an immigration attorney in Chicago who helps companies and individuals obtain work visas.

Darryl Brown, who chairs the board of directors of the Greater Franklin Development Corp, said the state could strike a deal with Saddleback and take over the USA Lifestyles Regional Center. The state could then expand its jurisdiction to include all of Maine’s economically distressed regions, or perhaps the entire state.

“It’s a very complex program,” he said. “But it does work. It’s absolutely a great tool.”