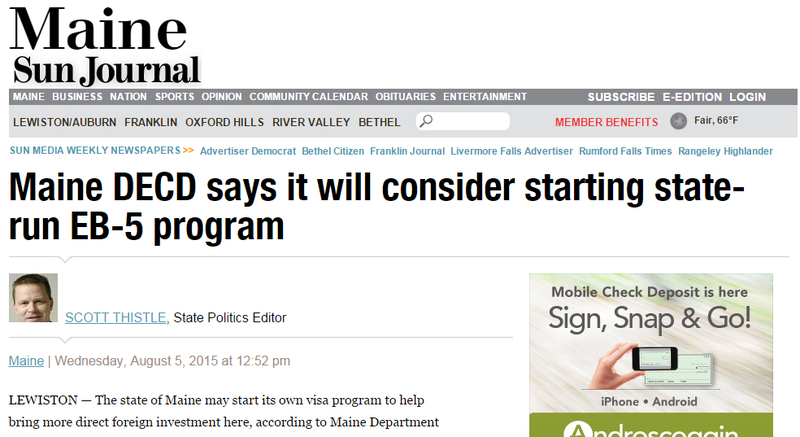 The state of Maine may start its own visa program to help bring more direct foreign investment here, according to Maine Department of Economic and Community Development Commissioner George Gervais.

The state is looking at establishing a state-run EB-5 regional center, Gervais said.

EB-5 visas provide foreign nationals with a way of obtaining green cards by investing money in the United States. To obtain the visa, an individual must invest $1 million, or half a million dollars in a high-unemployment or rural region.

The state is interested in establishing such a regional center "in the absence of activity within existing EB-5 regional centers in Maine," Gervais said in a message to the Sun Journal.

He added, "We are currently exploring options and are not prepared to comment further at this time.”

Gervais' statement came days after news that a group of Chinese investors purchased property in Auburn and is looking to invest some $40 million in a medical tourism facility there.

Lack of activity in Maine's privately run EB-5 programs seems to be prompting Gervais and the Community Development Department to move forward with a state program in hopes of capitalizing on federal immigration laws that allow foreign investors to gain a fast-track path to citizenship.

Maine has three private EB-5 regional centers but only one, USA Lifestyles, which is operated by the owners and executives of the Saddleback ski resort and targeted to help Franklin County and Livermore Falls, is wholly within the state of Maine.

Gervais has said the state has been watching the centers closely, but, "In all three cases there's been no activity (within Maine)."

He said the first project for any regional center has to be a strong one.

"For a regional center, your first project that you come out of the gates with needs to be something solid and have a very high probability of success," Gervais said. "If it were to fail, then your ability to attract further investments to your regional center would be almost impossible."

Saddleback General Manager Chris Farmer, who traveled to China in 2013 as part of a state trade mission with Republican Gov. Paul LePage, said during the trip he met specifically with recruiting companies that focus on recruiting EB-5 investors.

Farmer said growth in the overall EB-5 program has created much more competition and investors who once were largely looking for a way to preserve their capital along with a pathway to citizenship in the U.S. are now more interested in assuring a return on their investments.

He said the scope of the project serves as the key to drawing investors, but any EB-5 development that appears to have the backing of state government can gain a slight advantage, especially with Chinese investors.

He said recruiters also prefer projects that are not wholly dependent on their client's money and involve between 20 and 30 percent of funding coming from investors in the U.S.

"You have to make your project the most attractive," Farmer said. "The other piece that we found is the reputation of the regional center is very key to these people who are placing people in play, these recruiting companies."

Farmer said other regional centers in the U.S. have been fraught with problems.

He said while USA Lifestyles has had offers for projects, none so far has risen to that standard. Farmer said the company has been trying to work with the state on a deal that might offer a type of government certification since before LePage took office, but the negotiations never yielded any deal.

The Legislature in 2011 directed the Economic and Community Development Department to set up a state-run regional center. However, the Legislature did not appropriate any funding to do this, and Douglas Ray, a spokesman for the department, said the cost of applying for a regional center with the federal government is $120,000.

Vermont, which has one of the few state-run EB-5 programs in the nation, has been held up as a success story. The Green Mountain State has drawn down hundreds of millions of dollars to upgrade ski resorts with new hotels, condominiums, chairlifts and an indoor water park.

Federal lawmakers, including Sens. Patrick Leahy, D-Vt., and Chuck Grassley, R-Iowa, are looking to reform the federal laws the EB-5 program falls under.

“The EB-5 Regional Center program faces some challenges, but I have not seen any flaw inherent to the program that could not be remedied," Leahy said in a news release in June.

"And I have seen over the last two decades how the EB-5 program creates jobs and provides access to capital in communities in Vermont and throughout the country, all at no cost to American taxpayers," Leahy said.

He said that reforming and reauthorizing the EB-5 Regional Center program "warrants our immediate attention because the program is set to expire in a matter of months.”

The law authorizing the program expires in September. The legislation offered by Leahy and Grassley would not only reauthorize the program, it would change some of the rules, including increasing the minimum investment amount to $800,000.

The measure would tighten the guidelines in an attempt to direct most of the investment from the program to rural parts of the country with downtrodden economies.

The bill also would tighten oversight of the program by the Department of Homeland Security in a move meant to protect against terrorists using the program to gain access to the U.S.

A spokesman for Leahy said Wednesday that Leahy has tried for more than 10 years to have the program permanently authorized by Congress. If his bill fails to pass, he would work to have authorization of the program extended again in the short term, he said.

Possible changes for the program both within Maine and at the federal level could have implications for the Auburn project but what those are remained unclear.

Maine's U.S. senators, Susan Collins and Angus King, said they were studying the Leahy-Grassley bill and would keep a close eye on it to ensure any changes are not detrimental to ongoing efforts to use the EB-5 program in Maine.