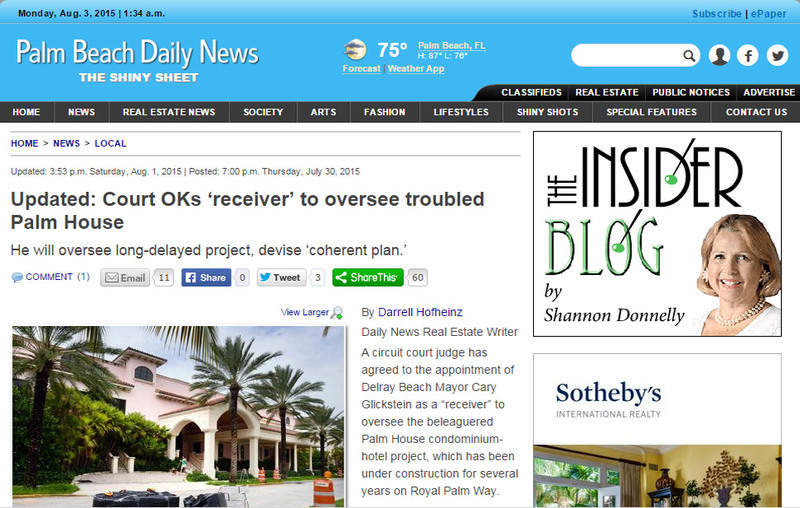 A circuit court judge has agreed to the appointment of Delray Beach Mayor Cary Glickstein as a “receiver” to oversee the beleaguered Palm House condominium-hotel project, which has been under construction for several years on Royal Palm Way.

Glickstein will work to “secure, improve, repair, manage and oversee completion of construction” and improvements at the property, which has been under renovation since 2006, according to Hafele’s order.

In addition to generating lawsuits and construction liens, the Palm House project at 160 Royal Palm Way is the target of a foreclosure action brought by its primary mortgage lender. The Palm House also has racked up more than $1.8 million in town fines for construction delays and non-approved projects at the site.

Glickstein will, in effect, serve as a third-party construction manager with the authority to hire contractors, subcontractors, architects and other workers necessary to complete construction and open “a first class, five-star condominium hotel,” Hafele wrote. Glickstein, who is being compensated for his efforts, also will monitor the project’s financial picture. 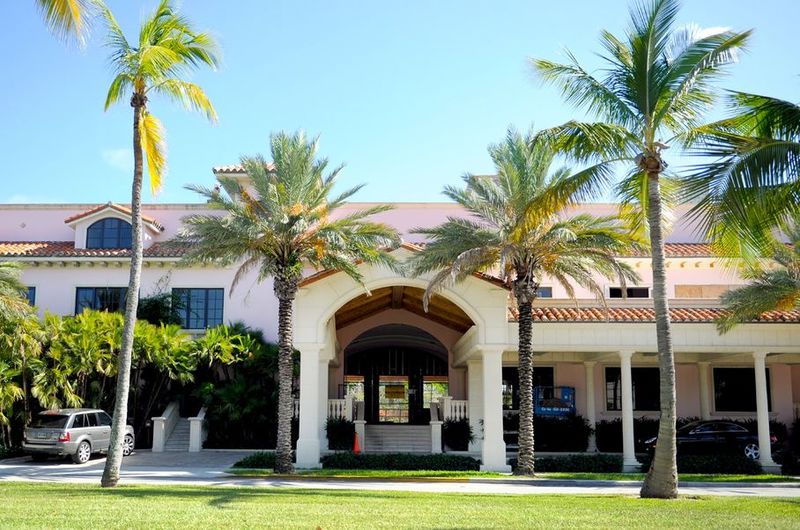 Under construction for nearly a decade, the Palm House hotel condominium has been involved in lawsuit battles, ownership disputes, code fines and foreclosure proceedings. It now has a court-appointed receiver charged with bringing the project to fruition.

Glickstein met with town building personnel and other officials several weeks ago for a briefing about the Palm House’s history, said John Page, director of Zoning, Planning and Building.

In the meantime, Glickstein said, he has been developing “a coherent plan” of procedure that should be completed in the next six to eight weeks and will be presented to the town.

“The goals of the various parties — the litigating parties, the creditors, the debtors and the town – are mutually aligned,” he said. “Everybody wants a completed project. This would be much harder if the parties weren’t in alignment.”

Hafele’s nine-page order acknowledged that the parties involved had agreed to work to obtain funds and financing to complete the project. Creating a realistic budget – and outlining proposed financing – is key, Glickstein said.

During his career, Glickstein has served as a receiver for other projects, he said. He agreed to be considered for the position after several lawyers involved in the lawsuits approached him, he explained.

“Because there had been such a loss of credibility, they determined that they needed a new face for the project,” he said.

Among its directives, Hafele’s order “stayed” lawsuits and counterclaims filed by several of Palm House’s players. A core issue involved who, exactly, had authority over the project. Those actions were related to an incident last October in which the project’s former manager and minority owner, Ryan A. Black, “seized” the property, according to a police report. The doors to the hotel building ended up padlocked and construction ceased for an extended period as a result.

Palm House LLC is the parent company of 160 Royal Palm LLC, which owns the property, according to Palm Beach Property Records.
“We are pleased to have a receiver appointed,” Black said Thursday in a brief phone interview.

Palm Beach attorney Leslie R. Evans, who serves as a spokesman for the hotel’s ownership, declined to comment. 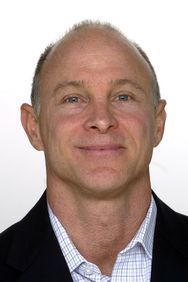 On Monday, another player involved in the project issued a statement saying that 13 lawsuits had been “examined and mediated” as part of the confidential agreement ratified by Hafele. The statement was issued on behalf of Palm House Hotel LLLP, a limited liability limited partnership, which the judge’s order identified as an “intervenor” in the case.

Palm House Hotel LLLP is associated with Boca Raton businessman Joseph Walsh, who had been at odds with the project’s ownership after issuing a $39.5 million second mortgage on the property in October. That loan apparently was referenced in the statement released by the company’s New York City-based public relations firm. The loan comprised “financial immigrant capital from limited partners” through a federal program known as the EB-5 Immigrant Investor Program, the statement said.

“We are enthusiastic about completing the project and know the end result will benefit all parties including the limited partners,” Walsh said in the statement.

He also said he and his company have “full confidence in (the receiver’s) judgment.”

Walsh’s statement said the litigants had reached the agreement in mid-May prior to a scheduled court hearing. Judge Hafele’s final order was dated July 16 and filed July 20, although Glickstein said his appointment had actually been finalized a few weeks earlier. The judge’s order clarified his responsibilities, Glickstein said.

Construction has been halted at the site since at least the time of his appointment, he added.

In his order, Hafele directed Glickstein to try to contract or reinstate contracts with hotelier Gordon Campbell Gray to serve as a consultant to the Palm House. Campbell Gray was previously involved with the project but severed ties last fall in the wake of the ownership dispute last fall.
The first mortgage — for $27.5 million — on the property is held by KK-PB Financial, a company controlled by Wellington developer Glenn Straub, a previous owner of the Palm House. Straub’s company filed its foreclosure action in September, saying the loan was in default. It was unclear from court records whether Hafele’s order would have any direct affect on the foreclosure suit. A hearing on the foreclosure is still scheduled for September, court records show.

Operated for years as the Heart of Palm hotel, the property changed hands in 2006 and buyer Robert Matthews announced plans to renovate it. In 2009, he lost it in foreclosure to Straub, whose company later transferred ownership back to the Matthews family through 160 Royal Palm LLC.