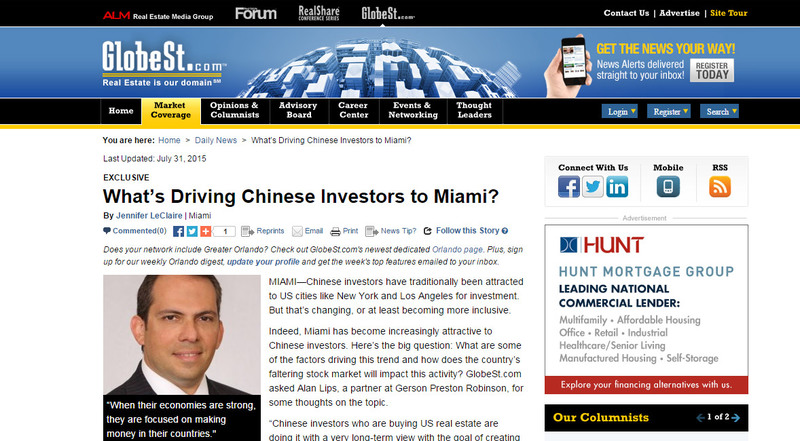 Chinese investors have traditionally been attracted to US cities like New York and Los Angeles for investment. But that’s changing, or at least becoming more inclusive.

Indeed, Miami has become increasingly attractive to Chinese investors. Here’s the big question: What are some of the factors driving this trend and how does the country’s faltering stock market will impact this activity? GlobeSt.com asked Alan Lips, a partner at Gerson Preston Robinson, for some thoughts on the topic.

“Chinese investors who are buying US real estate are doing it with a very long-term view with the goal of creating stability and a safe haven to put their money to work,” Lips tells GlobeSt.com. “While the Chinese have typically gravitated towards cities like Los Angeles and New York, they are beginning to see Miami as a better value.”

But that’s just part of the equation. Lips says Miami’s rising global status coupled with the vast pool of luxury assets available is fueling interest at a rate never seen before. On top of that, he explains, the fluctuating Chinese stock market is creating more traction in this regard as Chinese investors look to get their money out while they still can.

“At the same time, they are very eager to explore opportunities for EB-5 investment, which is very attractive from the standpoint that it creates an immediate path to US legal residency—something that these investors want as they lack the trust in the political and economic systems in their home country,” Lips says. And that reminds him of something he’s seen before. He says it’s similar to the historical trends and activity from Argentina, Brazil and Venezuela.

“When their economies are strong, they are focused on making money in their countries,” Lip says. “However, they look to the US to park their capital to avoid currency fluctuations, devaluation and political instability.”