THE BIG APPLE OR BEIJING? Chinese investment in NYC real estate has skyrocketed over the past year 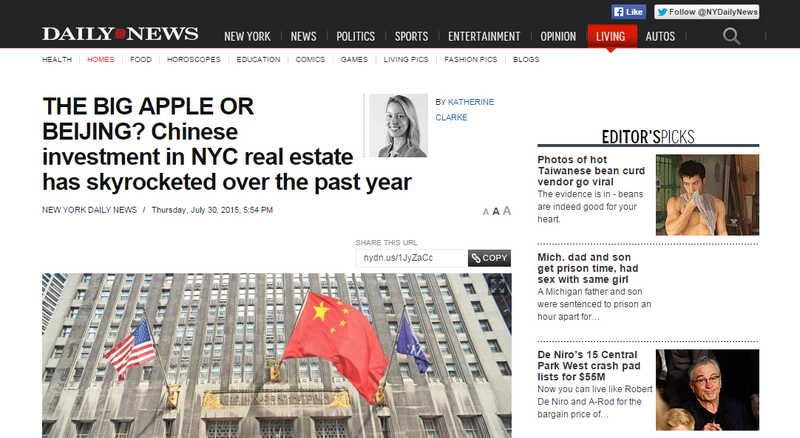 All of Manhattan is becoming Chinatown.

Chinese investors and developers are flooding the local real estate market at never-before-seen levels, buying some of New York City’s most iconic buildings at prices that local buyers aren’t willing to pay.

“Insane is definitely the right way to characterize it,” said real estate attorney Edward Mermelstein, who’s worked on projects with Chinese investors. “New York has become the favorite place for the Chinese to deploy their capital.”

So far this year, the Chinese have forked over more than $3.8 billion on Manhattan real estate, a more than threefold increase over what they spent in all of 2014, according to data from Real Capital Analytics.

And outbound capital from China going into U.S. commercial real estate transactions topped $10 billion in 2014 for the first time, after 72% average annual increases since 2010, according to commercial brokerage CBRE.

“Canadians used to be the No. 1 residential foreign buyers in the New York. Now, it’s the Chinese,” said real estate attorney Ross Moskowitz of Stroock & Stroock & Lavan. “We have seen some domestic buyers backing away from deals because they realize they’re going to be outbid.”

The new Chinese investors aren’t grabbing second-rate deals in Chinatown, but ponying up big bucks for trophy assets in the most expensive submarket in New York — Midtown. 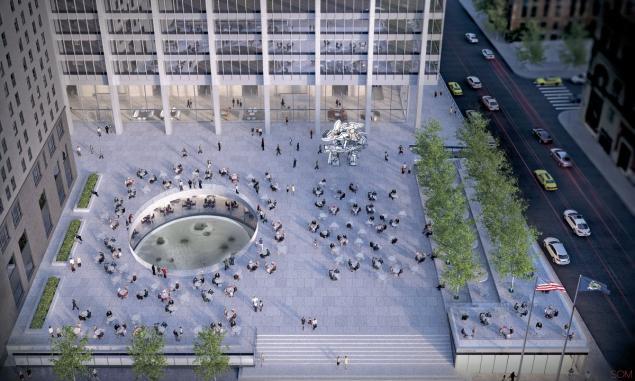 Fosun plans to rebrand One Chase Manhattan Plaza at 28 Liberty

Already this year, Beijing-based insurance company Anbang, the same firm that agreed to buy the Waldorf Astoria Hotel on Park Avenue for nearly $2 billion last year, has ponied up an additional $415 million for a 26-story, trophy office building at 717 Fifth Avenue.

And Fosun International, the Chinese conglomerate that bought downtown megalith One Chase Manhattan Plaza for $725 million last year with plans to rehabilitate and rebrand it as 28 Liberty St., is still in acquisition mode, buying a 50% stake in a residential development project at 15 E. 30th St.

In many cases, the Chinese are paying a premium over what their domestic counterparts are willing to fork over.

“They’re betting that it’s worth paying more for the highest-quality assets,” said Jeanette Rice, an economist at CBRE. “They think that the markets they’re investing in will be sustained over the long term.”

So far this year, Kuafu has doled out $260 million to buy the top floors of MiMA, a mammoth rental project on W. 42nd St.; paid north of $300 million for a development site opposite Bloomingdale’s on the Upper East Side; and struck a deal to build a $340 million mixed-use skyscraper on the corner of E. 86th St. and Lexington Ave.

Chinese investment in New York is hardly new — Asian investors have been putting money into New York real estate projects for decades — but it’s now reached fever pitch, leaving some wondering if the Chinese will soon control most of the city’s prime assets — and whether local real estate players will be able to compete for deals. 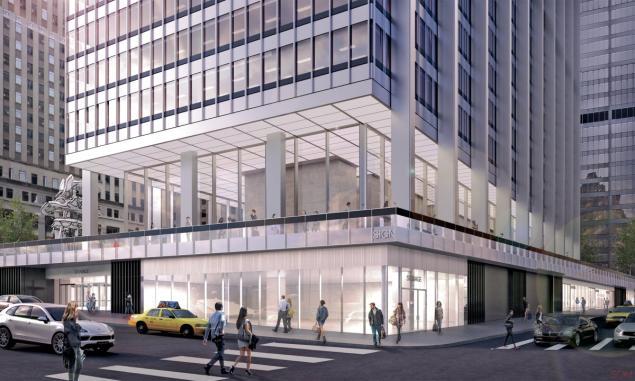 The drive to invest wealth outside of China will likely only intensify amid stock market volatility at home, Mermelstein said. Chinese stocks tanked in July after a mass sell-off, leaving some investors wary of putting their money in the market.

“The fact that you have a market in China that’s trending in the negative is forcing Chinese investors to look elsewhere,” he said.

But is this unprecedented wave of Chinese investment a good thing for the New York economy or does New York run the risk of becoming too dependent on capital from investors who could flee in an instant if the political landscape changes at home?

After all, the Japanese investors who stoked the New York market by paying top dollar for trophy properties such as Rockefeller Center in the 1980s and early 1990s soon crashed and burned amid a weak economy at home and a recession in the U.S. They sold of most of their assets at a loss in the mid-1990S, sending ripples through the real estate world.

Indeed, some haven’t discounted the potential of the Chinese stock market fluctuations to zap some Chinese wealth, thereby cooling investment in the U.S.

“Where there’s smoke, there’s fire,” said Borja Sierra, head of U.S. capital markets for commercial brokerage Savills Studley. “Some of the existing investors in the U.S. may find that they have to focus on issues at home.”

The potential risks are even more magnified, given that the total dollars being spent by the Chinese dwarf the once-considered massive investment by the Japanese three decades ago.

“Over-reliance on any single investment group by a market is always a risk, but I don’t think we’re at that point yet,” said Moskowitz.

In fact, the Chinese have learned from the mistakes of the Japanese, taking a longer-term view on investments and partnering with local players, experts said. 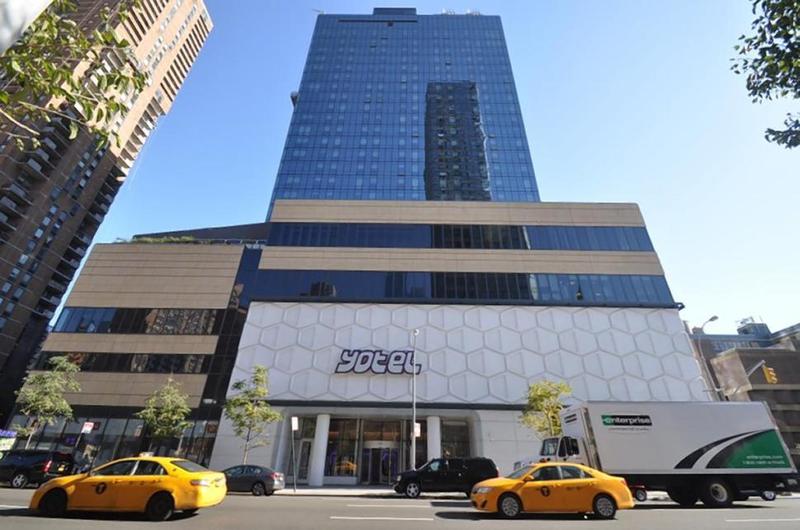 “The Chinese are more focused now on making sure that they’re working with existing experts in the New York market,” said Jeff Dvorett, an acquisitions expert who decamped from “Billionaires’ Row” real estate giant Extell Development to head up development at Kuafu last year. “They don’t want to just come in with a checkbook and buy a building. They’ve seen how that worked out before and they’re making smarter decisions.”

But there is some evidence that the Chinese are eyeing riskier deals. They’re moving from acquiring existing, income-producing assets to nabbing sites they will need to develop themselves — and that’s where things get complicated.

“I really believe a lot of these people don’t have the ability to build what they think they’re going to build,” said Robert Knakal of Cushman & Wakefield, referring to foreign buyers as a whole. “It’ll be very interesting to see how that plays out.”

So, what’s driving all this Chinese money to New York?

For one, a massive increase in the amount of wealth in China, the world’s second-fastest growing economy, has left many looking for ways to spend their money, especially as other metropolitan real estate centers such as London and Hong Kong inched up in price, lowering potential returns.

And they’re now freer to do so, given that the Chinese government, eager to turn the Yuan into a global currency, has been progressively loosening restrictions on investing overseas. 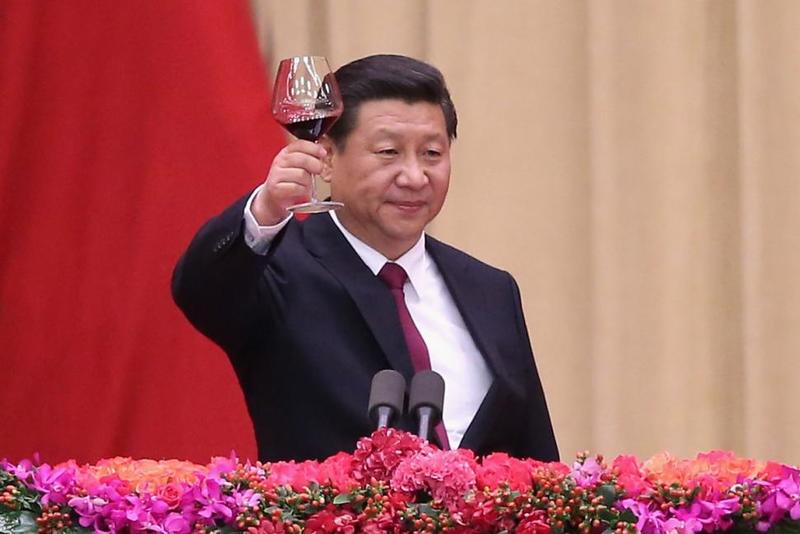 A new Chinese billionaire was created every week on average in the first quarter of this year and the number of high net worth individuals — those with more than 10 million Yuan ($1.6 million) in investable assets — has doubled since 2010, according to a recent report by Bain & Co.

Wealthy Chinese individuals are pouring money in smaller increments into local real estate projects via the EB-5 program, an immigration scheme that allows rich foreigners to get a green card in return for investing more than $500,000 in a local business and creating more than 10 full-time U.S. jobs. Money from the EB-5 program has gone toward financing New York projects such as the New York Wheel, the huge observation wheel under construction on Staten Island, Hudson Yards and the International Gem Tower on W. 47th St.

Applicants from Mainland China represented 85% of all such visas issued in 2014, according to the United States Citizenship & Immigration Services.

“Everyone feels like a major city such as New York is a safe haven for their money,” said Shing Wah Yeung of Yeung Development, a company that’s invested both in New York and China. “But you never know where Manhattan could be in a couple of years. You never see a downturn until it comes.”