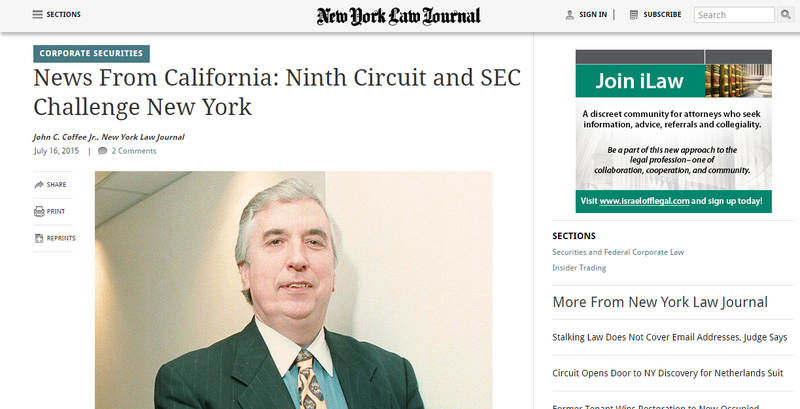 Can one imagine a less promising new litigation initiative from the SEC than this: The SEC's Regional Office in Los Angeles has issued Wells Notices to immigration attorneys (including at least one in New York City) on the theory that, in assisting clients to obtain EB-5 visas, they acted as unregistered brokers in violation of §15(a) of the Securities Exchange Act of 1934. Fraud theories under §10(b) of the 1934 Act and §17(a) of the 1933 Act have also been asserted.

What is going on here? The EB-5 visa provides a method of obtaining a "green card" for foreign nationals who invest a defined amount of money in the United States. To qualify, the foreign national must invest $1 million or, alternatively, at least $500,000 in a Targeted Employment Area with the effect of creating or preserving at least 10 jobs.18 As the program has developed, the investor can pay the minimum $500,000 investment to a "Regional Center" (which may be either a public or private body) that assumes the responsibility of creating the requisite number of jobs.

The program has been both controversial (because, to be blunt, it does sell visas for cash) and scandal-plagued (because foreign investors know little about these mysterious "Regional Centers"). Nonetheless, it has grown hyperbolically as thousands of newly wealthy Chinese investors are eager to purchase "green cards" (and the door to future citizenship) for $500,000. In 2014, Fortune Magazine published a detailed expose of "the dark, disturbing world of the visa-for-sale program."19 Much of the money so raised has gone into luxury hotels, such as ones in Hollywood and a pending Four Seasons Hotel in Tribeca (which are somehow located within poverty-stricken "Targeted Employment Areas"). Las Vegas casinos have been particularly successful in raising millions for expansion in this fashion, adding wings to their casinos to create new jobs.

Unsurprisingly, conflicts of interest are rampant. Chinese investors are solicited by various persons, including from offices in China established by American attorneys. These investors may not read English, have little knowledge about the thousands of Regional Centers that are now available (most established by an entrepreneur seeking funding), and probably defer to the party (attorney or developer) who solicited them. Attorneys for these clients typically also fail to disclose that they are receiving "contingent fees" from the developers for each $500,000 investment they bring in (a less elegant term for this payment might be "kickback"). But even if there are serious issues of legal ethics or even fraud in these practices,20 why is that attorney deemed a "broker" and required to register under §15(a) of the 1934 Act?

Section 15(a) forbids any broker or dealer "to induce or attempt to induce the purchase or sale of any security … unless such broker or dealer is registered under Section 15(b)."21 The term "broker" is broadly defined in §3(a)(4) of the 1934 Act, as one "engaged in the business of effecting transactions in securities for the account of others."22 Presumably, the SEC's theory is that the attorney induced the sale and chose the Regional Center in which to invest for his client, probably choosing (or advising his client to choose) that "Regional Center" paying him an undisclosed commission.

But are the obligations so purchased truly "securities"? Here it should depend on whether the visa seeker thought that he was making a long-term investment for profit or whether he was simply buying a visa. Under United Housing Foundation v. Forman,23 an investor who buys shares in a housing cooperative does not buy a security if the investor's primary motivation is to obtain housing. The typical EB-5 structure involves a capital contribution by the investor to a special purpose limited partnership or limited liability company that makes a construction loan to the developer (typically at an interest rate below what a bank would charge, which is why developers avidly seek such investments). To be sure, the line between an "investment" motivation and a "consumption" motivation is often not clear-cut, but the case law insists that the fact finder must look to the purchaser's "primary motive."24 Here, profit is conceivable (but only if one believes in the tooth fairy).

Deeming the immigration attorney a "broker" has a range of consequences, most of which are costly and unnecessarily force the square peg into the round hole. For example, if the attorney must register as a broker, the attorney will also need to join FINRA and pass some form of FINRA examination. If attorneys retreat from this field, investors may lose the desirable screening and due diligence services that they can provide. From a cost/benefit perspective, the case for compelling immigration attorneys to comply with broker/dealer registration and FINRA compliance rules seems highly questionable.

Paradoxically, the burdens are less severe on the promoters and Regional Centers. Because these foreign investors are probably "accredited investors" in most cases, the issuer (and its controlling persons) can do a Rule 506 private placement, using, if desired, a general solicitation.25 The real fraud in these cases seems more associated with the issuers than with the clients' own attorneys. In a Rule 506 offering, disclosure does not need to be provided to accredited investors, except to the extent necessary to satisfy Rule 10b-5.26

What practical steps can the immigration attorney take to avoid being deemed a "broker"? The attorney could distance himself from the investment decision and find someone else (for example, a registered broker) to make the investment choice. This would certainly raise the costs to the client who would now have to pay both a broker and an attorney, and it would likely eliminate the chief source of revenue in these transactions to the attorney (namely, the contingent marketing fee paid to the attorney for each investor obtained). Alternatively, the attorney could move the investment transaction clearly offshore. Even if the developer's bonds are securities, Rule 10b-5 cannot apply to the purchase or sale of a security in China under Morrison v. National Australia Bank Ltd.27 Again, however, this might be costly.

On the policy level, the SEC once faced a similar dilemma when it deemed interests in resort and golf condominiums and cooperatives to constitute securities. Suddenly, the SEC was faced with the prospect that thousands of real estate brokers would have to register under the 1934 Act as brokers. Rather than seek to force the registration of innumerable ski and beach resorts under the 1933 Act and real estate brokers under the 1934 Act, the SEC issued a guidelines release that set forth clearly demarcated standards as to what developers and real estate brokers could do or promise without being deemed to have sold a security.28 A similar compromise would be sensible here also. Interfering in the relationship of attorneys and their clients is neither a wise nor cost-effective strategy for the SEC, and because it tends to frustrate the EB-5 program, it may produce more of a political pushback than the SEC's staff has anticipated. Once again, discretion should prove the better part of valor for the SEC as well.

3. For the redoubtable Rakoff, Salman may not have even been his most interesting insider trading decision of the week. On July 2, 2015 (four days before Salman was released), Rakoff also decided United States v. Gupta, 2015 U.S. Dist. LEXIS 86635 (S.D.N.Y. July 2, 2015), in which he decided that no personal benefit need be shown in the case of a prosecution of a tipper. In short, the "personal benefit" rule discussed in the text applies only to tippees. As usual, the decision is short, incisive, and well-reasoned.

8. In my judgment, this was the most likely reason the Second Circuit declined to rehear Newman en banc. One can dispute and disagree with some of the Newman panel's statements about "personal benefit," but there was no point in debating this if the conviction had to be dismissed anyway because of the general insufficiency of the evidence on other points.

14. See 17 U.S.C. §240.10b5-2. This rule provides that a "duty of trust or confidence" exists in certain circumstances, without the need to look to the underlying state law or common law. One such circumstance, specified in Subsection (b)(3) of the Rule, is a communication among certain family members, including siblings. An affirmative defense is also provided with the burden on the defendant to show that the relationship created no expectation of confidentiality.

15. By its terms, Rule 10b5-2 applies in either civil or criminal cases. However, Justices Scalia and Thomas have argued that the government is not entitled to deference in criminal cases. See Whitman v. United States, 135 S. Ct. 352, 353 (2014) (concurring opinion of Justice Scalia on denial of certiorari) ("legislatures, not executive officers, define crimes"). Only Justice Thomas joined in this opinion. Also problematic for the government may be the special affirmative defense in Rule 10b5-2, which compels the defendant to prove that the relationship created no expectation of confidentiality. Although the legislature can place the burden of an affirmative defense on the defendant, it is less clear that the SEC can in a criminal case.

17. As noted earlier, because the Second Circuit panel also overturned the conviction based on the insufficiency of the evidence (because no showing was made that the defendants knew the information emanated from an inside source), the prosecution cannot reinstate the conviction, even if they convinced the court to liberalize or eliminate the "personal benefit" rule. From this perspective, the case is not "cert-worthy."
18. The EB-5 visa program was created by the Immigration Act of 1990. See U.S. Citizenship and Immigration Services, "Green Card Through Investment," http://www.uscis.gov/portal/site/ucis/menuitem/ebl.

20. The attorney who serves the client as an immigration counsel and various developers as a marketing agent has a severe conflict of interest. In some cases, a mail or wire fraud prosecution may be possible. Still, whether the undisclosed information about marketing fees is always material can be debated. See Golden Palm Investments Limited Partnership v. Azouri, 2015 U.S. Dist. LEXIS 75095 (D. Nev. June 18, 2015) (failure to disclose finder's fee not material).

26. See Rule 502(b) (information need not be provided to accredited investors in order to satisfy Regulation D). However, material information must always be disclosed by a seller of securities under Rule 10b-5. But see Golden Palm Investments Limited Partnership v. Azouri, 2015 U.S. Dist. LEXIS 75095.

28. See Securities Act Release No. 5347 (Jan. 4, 1973) ("Guidelines As to the Applicability of the Federal Securities Laws to Offers and Sales of Condominiums or Units In a Real Estate Development"). A corresponding release could give guidance as to what immigration attorneys could do and not do in connection with the EB-5 visa program. Disclosure of hidden fees might be required. At present, the SEC's interpretation of "broker" is simply a trap for the unwary.