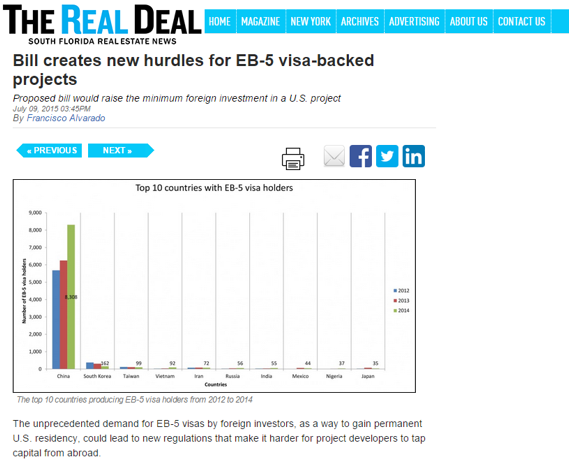 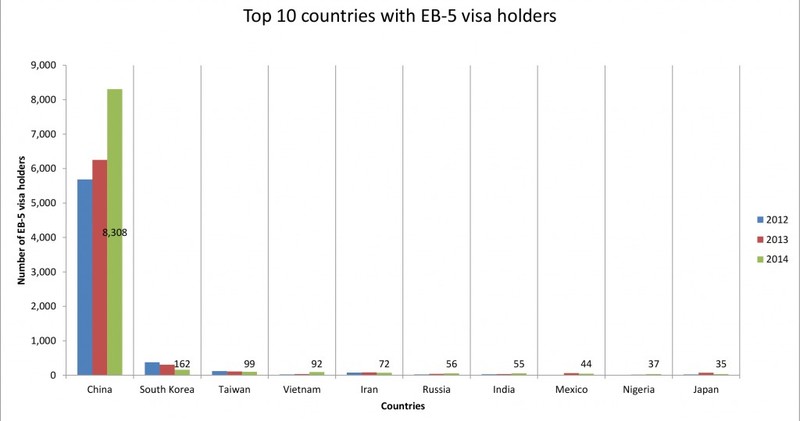 The unprecedented demand for EB-5 visas by foreign investors, as a way to gain permanent U.S. residency, could lead to new regulations that make it harder for project developers to tap capital from abroad.

Consultants and attorneys in South Florida who specialize in EB-5 visas told The Real Deal that the popular immigration program, which grants permanent residency to an investor who funds domestic projects that create jobs — as well as to immediate family members — is in for a significant overhaul.

Last month, longtime EB-5 critic Charles Grassley, a Republican U.S. senator from Iowa, joined forces with the program’s loudest champion, Sen. Patrick Leahy, D-Vermont, to introduce a bipartisan bill. Among the modifications, the bill will raise the minimum foreign investment in a project located in a targeted area that has high unemployment from $500,000 to $800,000, and from $800,000 to $1.2 million for projects located in areas that are not designated as having a high unemployment rate. In addition, the proposed legislation would also reduce the percentage of indirect jobs created that can be counted toward the job creation total.

Ronald Fieldstone, a partner in the Miami office of Arnstein & Lehr, said the bill is a compromise between Grassley and Leahy, who believes the program successfully helped U.S. companies and entrepreneurs get financing during the recession years. Fieldstone assists projects in South Florida to lure EB-5 investors and comply with the program.

“The proposed legislation is extraordinarily complicated, confusing and, to some degree, unclear,” Fieldstone told TRD, adding he expects “strong opposition” from the EB-5 industry to the bill. Last year, Grassley, who has complained that EB-5 visas provide foreigners with a mechanism to circumvent national security, took over the chairman’s role from Leahy on the Senate Judiciary Committee, which oversees immigration reform. In 2014, for the first time since the program’s inception in 1993, immigration officials allocated 10,000 visas, the maximum allowed. And there is pent-up demand: Investors filed 10,928 EB-5 applications with the U.S. government in fiscal year 2014, up from 6,346 a year prior and just 1,258 in 2008.

Despite its immense popularity, the continuation of the EB-5 program had been in limbo. It’s supposed to expire on Sept. 30. But if the new law is approved by Congress and signed by President Barack Obama, EB-5 visas will continue to be distributed for another five years. Lauren Cohen, founder of EB-5 consulting firm e-Council, Inc., said if the bill passes without any changes, a project developer that is currently waiting for approval from immigration officials to participate in the program would be required to ask investors to come up with another $300,000.

“It is a ridiculous, terrible bill,” Cohen told TRD. “The processing time can take up to 14 months or longer. So someone who has been in the queue for that long will be penalized. That is not feasible. I don’t see that happening.” Cohen and Fieldstone said the bill would also severely restrict the definition of a targeted area with high unemployment, which has a lower investment threshold for foreign nationals participating in a project. In addition, the new law would crack down on so-called “regional centers,” entities that file EB-5 visa petitions and project proposals on behalf of developers and entrepreneurs to the U.S. Immigrations and Citizenship Services office.

For instance, anyone seeking to set up a regional center would have to pay the government a $20,000 annual fee. “That will comb out a fair number of regional centers that are inactive,” Fieldstone explains. Although, Cohen said the fee proposal won’t fly with the industry. “To me, that is a cash grab,” she said. “I don’t see that passing either.”

For projects currently on the drawing board or preparing to go to market, Fieldstone said he would advise their owners to apply for “exemplar status,” a term used for projects like Jeffrey Berkowitz’s SkyRise Miami that received pre-approval to recruit EB-5 investors by USICS, before the agency has issued the visas. “Under the new law, all the investors in a project with exemplar status will be grandfathered in,” Fieldstone said. “They would be exempted from some of the new, more onerous requirements.” Projects with exemplar status would have a marketing advantage over the ones that don’t, Fieldstone said. “If I can invest $500,000 instead of $800,000, I am going to invest the $500,000,” he added. “Investors will go to those projects first.”