To Register or Not to Register?: Broker-Dealers and Finders @ Paper this Deal 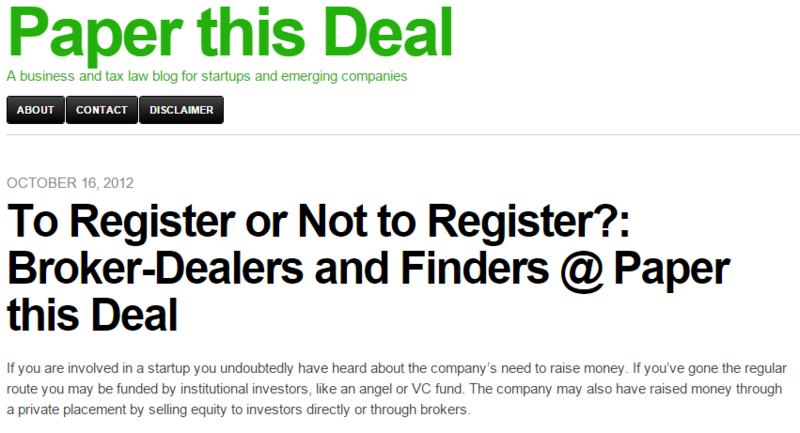 If you are involved in a startup you undoubtedly have heard about the company’s need to raise money. If you’ve gone the regular route you may be funded by institutional investors, like an angel or VC fund. The company may also have raised money through a private placement by selling equity to investors directly or through brokers.

You may have heard of another type of person involved in the capital raising process called a “finder”.   Everyone has heard of the term a “finder’s fee” which is known to be about 10% of the overall transaction.   The concept is the same with startup financing or M&A activities, although who can qualify as a finder and how they can be compensated has been a big deal with the SEC in the last couple years.  The real issue is when anyone can act as a finder, and if they really should be registered with the SEC as a broker-dealer.

To describe the current situation with finders and the SEC, first you have to have the basics about who and what a “broker” is (also called “broker-dealers” or BDs).  The Securities Exchange Act defines a broker as “any person engaged in the business of effecting transactions in securities for the account of others.”  The Exchange Act also requires that any broker transacting in securities or attempting to induce the purchase or sale of securities must be registered with the SEC.  Your typical stock broker, the guy that you wish you called to buy shares of Apple a couple years ago, is the prototypical example of a broker (also think Scottrade, etc. as entities are registered as brokers also).  To become a properly registered broker is no small task: the person or entity must file a Form BD with the SEC; become a member of a self-regulatory organization such as FINRA and a member of the Securities Investor Protection Corporation; brokers are required to register in the states where they perform broker-dealer activities, and lastly; certain individuals employed by a BD must pass securities exams such as the Series 7, etc.

Now, all that registration is for good reason.  Brokers actively promote certain types of investments to clients and when the clients invest in certain companies or funds, the brokers get a commission based on the amount invested or a flat fee or some other arrangement.  Brokers are involved in the negotiation of certain types of investments as well.  The risk for misrepresentation, fraud and pushing bad investments (pump and dumps) is always there and registration and regulation of broker’s activities attempts to lessen and prevent these risks.

Because the Exchange Act does not define “effecting transactions” or otherwise provide guidance on who should be registered as a broker, courts have through a series of cases, come up with various factors which help to indicate if an individual or firm is acting as a broker.  The most commonly used factors come from a case called SEC v. Hansen, from the Southern District of New York in 1984, and they are whether a person

Another factor commonly looked at is whether the prospective financial needs of an issuer (or sometimes the investor) are analyzed, and whether there were any recommendations or financing methods designed by the person acting as a finder.  The more factors present from the above, the more likely the person or entity is acting as a broker, and not a finder, and should be registered.

Ok, so that’s what brokers are.  Finders perform a similar function in that they introduce a potential investor to a prospective securities offeror (also sometimes a potential M&A target/acquirer).   If the transaction moves forward the finder gets a fee for the introduction – this can be a flat fee agreed upon beforehand or a fee based upon the amount invested.  That is where the finder’s role in the transaction is supposed to end, a finder (as an unregistered entity/person) should not be involved in the discussion regarding the terms of the actual investment.  The finder should make the introductions and then wait for a check.  Anything more can get the finder in trouble with the SEC.

The above summary is a vast oversimplification of the differences between a broker and a finder.  There have been numerous cases and no-action letters (which, remember, are non-binding) by the SEC which have attempted to give some guidance to persons operating in this space.   Historically, the SEC took the position that introductions and receipt of a fee alone would not require finders to register as brokers.  The SEC said that if a person was involved in the discussions regarding the investment they were likely acting outside the bounds of what a finder can do.  Lastly, if the alleged finder was paid a flat fee instead of a fee based on the amount invested, that is helpful to show that they are acting as a finder and not a broker.

That historical position from the SEC was seemingly changed through a no-action letter on May 10, 2010 issued to Brumberg, Mackey & Wall, P.L.C.  The Brumberg firm sought approval of a “Referral Fee Agreement” and situation where it would pretty much act as a finder, albeit that Brumberg would receive a fee based upon the amount of money invested.  The SEC implied that receiving “transaction-based compensation” was the sole factor which would require Brumberg to register as a broker.   The Commission stated that “[a] person’s receipt of transaction-based compensation in connection with these activities is a hallmark of broker-dealer activity.  Accordingly, any person receiving transaction based compensation in connection with another person’s purchase or sale of securities typically must register as a broker-dealer or be an associated person of a registered broker-dealer.”

In the Brumberg no-action letter the SEC did not definitively state why it was changing its earlier course, and now only relying on the “transaction- based compensation” factor.  The SEC did, however, state as justification that because Brumberg would introduce “individuals and entities who may have an interest in providing financing” that it “implie[d] that [Brumberg] anticipate[d] ‘pre-screening’ potential investors to determine their eligibility to purchase the securities, and‘pre-selling’ [the Offeror’s] securities to gauge the investors interest.”  The SEC left people in the financial and legal world to decipher what this actually meant (I’m not exactly sure what it means).

While the Brumberg no-action letter may seem to have been the last word, luckily, one year after the Brumberg no-action letter, a big decision was handed down in a case out of the United States District Court in Tampa Florida, SEC v. Kramer, No. 8:09-cv-455-T-23TBM (M.D. Fla., April 1, 2011). In Kramer, an individual (Kramer) was acting as a finder in the employ of another, and was receiving transaction based fees based upon all introductions and subsequent investments from the persons Kramer introduced to a company called Skyway Aircraft.  Long story short, Skyway Aircraft went bankrupt and investors reported events to the SEC, who then investigated and brought actions against various parties involved including Kramer.  The SEC claimed that Kramer was involved in effectuating the transaction, that he received transaction based compensation and that other factors pointed to the conclusion that Kramer was illegally acting as an unregistered broker.  Kramer’s defense was that he did make introductions and receive compensation but that he did no more than that, and that he was therefore exempt from registration as a broker.

The court ruled in Kramer’s favor that no registration as a broker was required, noting that “the distinction between a finder and a broker . . . remains largely unexplored.”  The court, in ruling for Kramer, pointed out that the factors that have been used are not exclusive, and that other important factors should be examined, such as “the most important factor in determining whether an individual entity is a broker” is whether there is “a regularity of participation in securities transaction at key points in the chain of distribution”  (used in a previous broker/finder case, SEC v. Bravata).  The SEC in arguing for its proposition that Kramer should have been registered as a broker, put forward its “new” position from the Brumberg no-action letter, that anyone receiving transaction based compensation is required to register as a broker.   The Kramer court, after making clear that no-action letters have no legal precedence, dismissed the SEC’s position and stated that the multi factor test must continue to be used.

The SEC has appealed the Kramer decision and many people are eagerly waiting for the appeals court decision.  If the lower court decision in Kramer is upheld, then Congress and/or SEC may be forced to formally create an exemption for finder’s activities or to at least more clearly define what can and cannot be done without having to register as a broker.  We’ll see what they say.