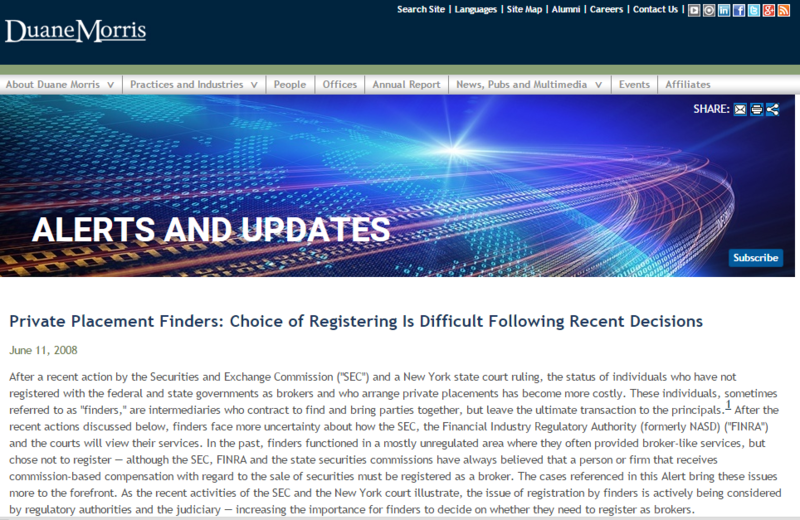 After a recent action by the Securities and Exchange Commission ("SEC") and a New York state court ruling, the status of individuals who have not registered with the federal and state governments as brokers and who arrange private placements has become more costly. These individuals, sometimes referred to as "finders," are intermediaries who contract to find and bring parties together, but leave the ultimate transaction to the principals.1 After the recent actions discussed below, finders face more uncertainty about how the SEC, the Financial Industry Regulatory Authority (formerly NASD) ("FINRA") and the courts will view their services. In the past, finders functioned in a mostly unregulated area where they often provided broker-like services, but chose not to register — although the SEC, FINRA and the state securities commissions have always believed that a person or firm that receives commission-based compensation with regard to the sale of securities must be registered as a broker. The cases referenced in this Alert bring these issues more to the forefront. As the recent activities of the SEC and the New York court illustrate, the issue of registration by finders is actively being considered by regulatory authorities and the judiciary — increasing the importance for finders to decide on whether they need to register as brokers.

On April 11, 2008, the SEC sanctioned a finder for violating registration requirements of the Securities Exchange Act of 1934.2 The SEC raised no other legal issue but the matter of registration. In the action, the SEC charged Robert MacGregor for acting as a broker-dealer without registering with FINRA. MacGregor was an employee of Duncan Capital, a registered broker-dealer whose sole business was arranging private investments in public equity ("PIPEs") for small cap companies. MacGregor allegedly conducted brokerage activities on many of these PIPE offerings, including negotiating the terms of the offerings with issuers and regularly soliciting investors for the offerings. MacGregor received a fee based on the dollar amount of the placement as compensation for his activities. Although MacGregor knew of the requirement to be registered with FINRA and knew that he had not passed the required examinations in order to conduct his brokerage activities, he had not registered. The SEC's order bars MacGregor from association with any broker or dealer for at least one year as well as requiring disgorgement of "ill-gotten gains" derived from violations of the registration requirement.

Also in April 2008, the Supreme Court of New York County in New York ruled against an unregistered broker that brought suit to collect an unpaid fee.3 In the suit, Sunshine State Holding Corp. ("Sunshine") entered into an agreement with an affiliate of Torsiello Capital Partners LLC ("Torsiello") to render financial advisory and investment banking services and to act as the sole agent for the private placement of Sunshine's securities. Although Torsiello never secured any funding for Sunshine, Torsiello sought to enforce the agreement, claiming Sunshine owed Torsiello a fee based upon a percentage of the amount that Sunshine later successfully raised without Torsiello's assistance. The court held that because Torsiello was not a registered broker, but its proposed service was interpreted by the court to fall under the SEC's definition of brokerage services,4 the agreement was void and rescindable. Furthermore, the court found that Torsiello had intentionally misrepresented its registration status to Sunshine (which believed that Torsiello was registered as a broker) and ordered Torsiello to repay the retainer fee it had previously received from Sunshine.

Both the SEC action and the New York state court ruling show the high price unregistered "brokers" may pay for arranging private placements for a fee based on the amount of the placement.5 As illustrated in Crow, the SEC is more likely to consider individuals performing private placement activities to be brokers if they receive compensation via a commission- or success-based fee, while individuals who receive a fixed fee for their services are less likely to be considered brokers. In Torsiello, the court raised the stakes further for unregistered brokers by holding that the unregistered broker was in violation of Section 29(b) of the Exchange Act due to the broker's failure to register. As remedy, the court took the unusual step of rescinding the parties' agreement, thereby making the broker potentially liable and preventing the broker from being able to sue for his fee.

The recent actions demonstrate regulators' interest in defining this area of the private placement market. SEC plans to draft a registration policy for private placement brokers in the near future were revealed at an American Bar Association spring meeting this year. Taken together, the activities of the SEC and the New York court suggest that finders may face a high price for arranging private placements while not being registered as broker-dealers.

If you have any questions regarding the new rules, including how they may affect your company, please contact one of the members of the Securities Law Practice Group or the lawyer in the firm with whom you are regularly in contact.

5. As noted in the American Bar Association's Report and Recommendations of the Task Force on Private Placement Broker-Dealers from June 2, 2005 ("Report"), the SEC generally disapproves of compensation to unregistered broker-dealers based upon the amount of the transaction. However, the Report suggests that unregistered finders that charge a fixed fee for their services will face less scrutiny by the SEC.