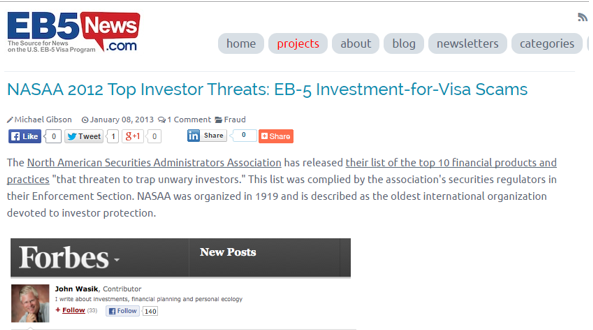 The North American Securities Administrators Association has released their list of the top 10 financial products and practices "that threaten to trap unwary investors." This list was complied by the association's securities regulators in their Enforcement Section. NASAA was organized in 1919 and is described as the oldest international organization devoted to investor protection.

The 2012 JOBS Act features prominently in much of the descriptions as concern over the deregulation of the financial markets could invite in more unscrupulous operators and promoters to dupe unwary individuals into investing in risky, illiquid assets.

In the U.S., NASAA acts as the voice of state securities agencies responsible for investor protection and efficient capital formation and their mission is seen as protecting investors who purchase securities or obtain investment advice.

The concern is that relaxed rules and registration exemptions proposed under the Jobs Act to promote raising capital with Crowdfunding and other Internet solicitation platforms will encourage more investment into projects where the risks are not clearly outlined, or worse, where there is material misrepresentation of the safety of the investment to unwary investors.

"Many states are reporting a recent increase in active investigations or recent enforcement actions involving Internet fraud and JOBS Act-triggered activity is likely to elongate that trend."

The next item was Inappropriate Advice or Practices from Investment Advisers and that should be of interest to the many "EB-5 Consultants" who offer to expedite the process of raising capital for their Center clients by putting up websites and hosting seminars offering advice in return for receiving success based compensation and "finders" fees.  These unregistered brokers freely give investment advice in return for compensation from the Centers which they represent.

While this activity is illegal it is common practice in the industry due to the lack of enforcement action by regulators, but that could change due to the increased scrutiny being given to the industry and practices by those that the Regional Centers employ to raise capital for them.

Against regulated, registered firms actions by state agencies have doubled focusing both on compliance and advice being given.

This is the first time that the EB-5 Immigrant Investor program has made the list of top-investor-threats but not without good cause. NASAA lists the following reasons why the program made the watch list:

"Investors must beware of promoters who falsely claim that an investment in their venture is safer or guaranteed due to an influx of foreign cash.  Unscrupulous promoters may seek to prop up the plausibility of their scheme by highlighting a connection with a federal jobs program."

They continue by reminding the reader that "all investments with an EB-5 component are subject to traditional securities laws," something that is overlooked by many in the industry, in particular immigration attorneys who continue to give investment advice to their clients on which EB-5 project to select based on subjective criteria in return for compensation and lucrative contracts for legal work.

Many EB-5 Regional Centers and project developers continue to rely on U.S. immigration attorneys to promote projects to their clients and are given success based fees and other forms of compensation in return but these unregistered promoters may find little protection afforded to them in the event of regulatory action or investor litigation should their actions and recommendations cause loss or harm to their immigrant clients, and will most likely find little protection in the dislaimers they produce.

They conclude with these remarks:

"Investors considering any enterprise with an EB-5 or IIP feature should make sure to obtain full information on every component of the venture, including all funding sources and the background of all promoters."

In recent months we have seen a number of promoters on EB-5 discussion boards such as Linkedin promoting investments and offering large commissions in return for investors found:

or seeking commissions in return for investors delivered:

The remainder of the list produced two topics of interest to the EB-5 community:

The report noted that real estate fraud ranked as the third most common product leading to investigation and enforcement actions. It mentions that even with legitimate real estate investments, there are substantial risks involved and with non-legitimate scam artists the risks rise even more dramatically.

"While legitimate real estate investments can be an important component of a diversified portfolio, investors should be aware that schemes related to buying, renovating, flipping or pooling distressed properties also are popular with con artists."

Reg. D offerings used to be the exemption of choice by EB-5 Regional Centers until they realized that if they filed theaccompanying Form D they would be required to disclose payments made to unregistered agents and then most switched to the less clear guidelines afforded to them under the S exemption.

"In the most recent survey of state securities regulators, fraudulent private placement offerings were ranked as the most common product or scheme leading to investigations and enforcement actions."

The report goes on to say that companies use the Reg. D offerings to raise capital for legitimate purposes, these investments are highly illiquid, lack transparency, have little regulatory oversight and not suitable for many individual investors. The concern is with the removal of the 502(c) ban on general solicitation, more abuse of the lax regulatory environment will result in greater losses by investors.