Neogenix Oncology: A Good Case Study on Securities Law (Non)Compliance by a High Growth Company: When the Genie Can’t Be Put Back in the Bottle 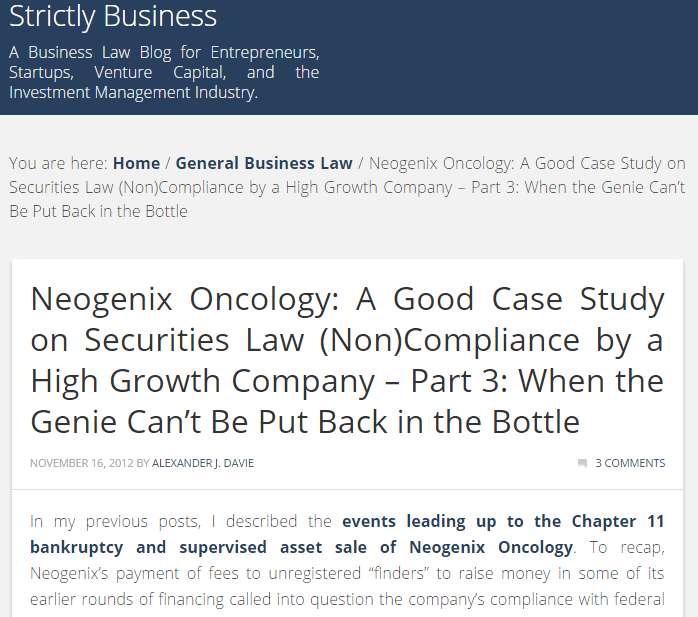 In my previous posts, I described the events leading up to the Chapter 11 bankruptcy and supervised asset sale of Neogenix Oncology. To recap, Neogenix’s payment of fees to unregistered “finders” to raise money in some of its earlier rounds of financing called into question the company’s compliance with federal and state securities laws. Under such laws, just about any arrangement in which someone is paid a contingent or variable fee to raise capital for a company is prohibited, unless that person is registered as a broker-dealer or is a registered representative of a broker-dealer. After the SEC commenced an investigation into Neogenix’s practices, the company’s accountants concluded that potential investor lawsuits and/or governmental enforcement actions could give rise to large contingent liabilities on the company’s balance sheet. This uncertainty led to Neogenix being unable to raise further funds, necessitating the company’s bankruptcy filing. In this post, I’ll explore the likely reason why Neogenix had to take the drastic step of filing for bankruptcy to cure its securities violations.

Indeed, it is natural to wonder why Neogenix had to file for bankruptcy. It seems surprising that there would not be a simpler way to correct for past securities law violations. Unfortunately, often there is very little a company can do once securities laws have been violated. Once this occurs, government agencies, such as the SEC or state securities commissioners, have the ability to open an investigation and seek penalties against the company for its violations. In addition, investors who purchased the company’s securities in transactions that violated securities laws often have what are called “rescission rights” — that is, they can undo the deal and require that the company (and sometimes its officers and directors) return the money that was invested plus interest. This creates significant contingent liabilities that can deter future investors from investing in the company.

One potential solution that is sometimes used is for the company to make what is called a “rescission offer” under state securities laws. Most states provide that a company can make an offer to pre-emptively buy back securities from the investors who invested in the transactions that violated securities laws at the original purchase price plus interest. These rescission offers must be done in strict compliance with each state’s requirements. If all of these requirements are complied with, and the investor fails to take advantage of the rescission offer within 30 days, most state statutes provide that any rescission actions that investors have under state securities laws would be barred.

Another method that can be used to “clear up” previous instances of securities violations is to transfer the assets of the company to a new entity in exchange for stock in the new entity, leaving the existing liabilities (including securities law liabilities) with the old company. The new entity then carries out further rounds of fundraising, with reduced likelihood that the new investors’ capital will be subject to risk from securities lawsuits from previous investors. That risk doesn’t just disappear however. The old entity, which has retained the liabilities will either hold stock in the new entity, in which case such stock could be used to satisfy any judgments arising from the old liabilities, or the old entity is dissolved and such stock is transferred to the owners of the old entity. Such an approach is vulnerable to attack under the theory of successor liability. Successor liability arises when one company purchases the entire operation of another company. Even though only the assets are transferred to the new company and not the liabilities, plaintiffs have sometimes been successful in arguing that such transfers should also cause certain liabilities to transfer over to the new company because such a transaction is unfair to the creditors of the old company. So while an asset transfer has the potential to be successful at mitigating against liability for past securities violations, there is always some degree of uncertainty in using it because future investors may fear a successful successor liability claim.

Avoidance of successor liability is probably what in the end motivated Neogenix to file for bankruptcy protection. Under bankruptcy law, Neogenix could obtain a judgment from the bankruptcy court which discharges the new surviving entity from liabilities of the old company, such as past securities law violations. The fresh start the bankruptcy law allows proved very valuable here, and allowed the company to raise further funds without future investors being concerned with having to pay the price for the company’s previous mistakes.

Nonetheless, this case study provides a great illustration of why it is so difficult to proverbially “put the genie back in the bottle” once a securities law violation has occurred. Drastic action is sometimes necessary to permit the company to raise further capital and to continue.

[1] Neither the Federal Securities Act of 1933 nor the Securities Exchange Act of 1934 provide for any protection to issuers who engage in a rescission offer. In addition, the staff of the SEC has taken the position that rescission offers do not provide any protection against suits under federal securities law. That said, a rescission offer can still be useful to a company for certain types of securities violations, such as violations of the registration requirements, because the statute of limitations for violations of the federal registration requirement is very short: one year as opposed to state statutes of limitations which can go as long as five years. For instance, if a security was sold in violation of the registration requirements of both federal and state law, once one year has passed after the sale, an action under federal law would be barred by virtue of the statute of limitations and if the company undertakes a rescission offer correctly, the state law claims would also be barred.

[2] There was also likely another reason why the Google rescission offer needed to be registered. Since Google planned to engage in an IPO, it could not engage in a private rescission offer right before the IPO because the two offers would be considered integrated, which essentially means that the pending IPO would prevent Google from being able to successfully take advantage of a private placement exemption.